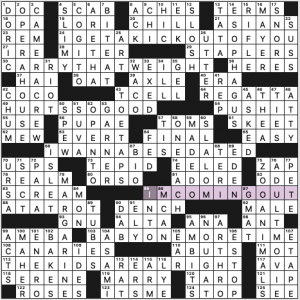 Fun pop-culture theme for Mother’s Day: a series of song titles that take us from pregnancy through a multiple birth.

Obligatory disclaimer: Yes, most birthing people call themselves mothers, but some are dads who are transgender men. They get celebrated on Father’s Day. Zero idea what nonbinary parents opt for … wait, I checked on Twitter and someone I’ve followed for years, Jude Doyle, says his/their mom suggested Birthgiver’s Day. I like it! (Note: Any comments decrying this paragraph will get deleted. You don’t have to complain to an audience.) Also, lots of mothers didn’t give birth to their children, but they are parents just the same.

Other obligatory disclaimer: Some of you had terrible mothers, or you’ve lost your mom, or you lost a child, or you were never able to become a parent but wanted to, so this observance is a painful one. I see you, and I wish you a peaceful Random Sunday in May tomorrow.

Taking a look at the fill, the puzzle got off to a terrific start with that OPERA HOUSE/CAMERA CREW pair in the 1a corner, but not so hot with the OPA IRE MEW crossers. In the opposite corner, we hit some hardcore crosswordese: 107d. [Tour de France stage], ETAPE and 106d. [Legally foreclose], ESTOP.

Happy Mother’s Day to all the wonderful moms of Crossworld!

My weekend has been jam-packed (and still is), so I had very little time to solve crosswords. Here’s to hoping I figure out the meta behind this one during the write-up. Otherwise, I’ll have to update this afternoon. Gotta meet mom for breakfast and then an escape room!

THEME: ??? Something about reactions I think… 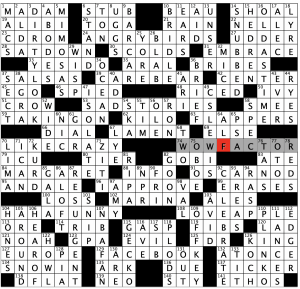 Well, clearly each of the entries starts with a reaction that one can click on FACEBOOK. So that satisfies the “Reaction” part of the title. But what of the “Chain” part? Does the second word in the themers play a role?

BIRDS, BEAR, STORIES, CRAZY, FACTOR, FUNNY, APPLE. Nothing is clicking for me just yet. Hmmm… in the rest of the grid….

Well, the word SCOLD is below ANGRY BIRDS. Are there other corresponding reactions? I see LAMENT under SAD STORIES. GASP is there… that’s a reaction to WOW I suppose. I think I may be onto something…

Other reactions in grid:

When you CARE, you EMBRACE.

When you’re ANGRY, you SCOLD.

When you’re SAD, you LAMENT.

When you’re WOWed, you GASP.

Scanning grid for HAHA / LOVE partners. Can’t find any! But this can’t be a dead end…

Oh wait! When you want to say HAHA, you may HOWL…

I’m tempted to say TICKER for LOVE? The clue for TICKER is tersely [Heart]. Not confident with that one since it doesn’t fit the formula. It’s not a reaction like the others.

I’m close I think, but that’s all the time I have right now. I’m relatively certain I’ll figure it out though. Back later to update. Feel free to point out what I’m missing in the comments!

Oh hold on… Anagramming the first letters of the reactions I found already, I see SIGH in there, which is a reaction of relief. That leaves EL?

Oops. Thought I had something.

Ok, so I haven’t looked at any comments yet (everyone has probably already discussed the answer), but I think I have something. I’m gonna continue to hash it out here.

The lack of entries that are synonymous as an expression of LOVE bothers me, and so does including the entry TICKER. I think, however, that I shouldn’t be looking for more reactions, but rather at the clues. The clue [Heart] perfectly describes the LOVE button. That has to be something. Let’s go down that road…

The clue for SCOLDS is [Wags a finger at]. That one doesn’t quite work with this new idea. Oh but hey… the clue for DIRTY LOOK is [Menacing scowl], which quite accurately depicts the angry face button.

[Give a heartfelt hug to] Totally describes the CARE button.

[Expression of grief] Works for the SAD button.

[Laugh heartily] I suppose fits for the HAHA button, though something about the verb form is bothering me (which didn’t bother me for the CARE button). Can’t quite put my finger on it.

[Betray amazement] may work for WOW. I guess. Some of these are verb phrases and some are noun phrases. I may be screwing something up.

Now, let’s use the order of the buttons as they appear (which I posted a picture of in my initial write-up this morning) and the first letters of their corresponding entries and see if this ain’t solved…

Well, the order didn’t work, but I see the answer is clearly DELIGHT! It’s probably grid order, not the order of the buttons.

Now I’ll see in the comments that everybody got this one way before me. To be fair, it kinda clicked on my drive to breakfast after I had to leave :)

P.S. Grid with clearer visual explanation below courtesy of Evan: 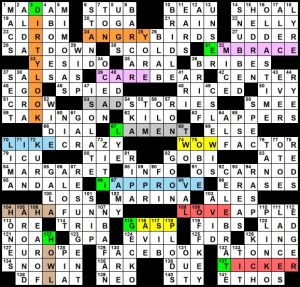 The “issue” of the title is a magazine. Remember those? Each theme answer is a familiar phrase or name clued as it if referred to a magazine title. 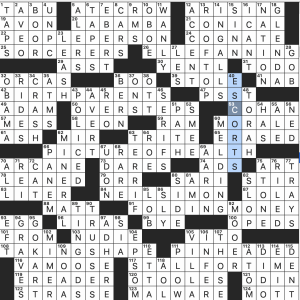 They all work nicely except as noted. It’s a worthy Sunday theme that didn’t really tickle my funny bone. To each her own.

What I didn’t know before I did this puzzle: that LA BAMBA is the only one of Rolling Stone’s “500 Greatest Songs” not written in English.

Theme: Familiar phrases that include a hidden initialism for an exam are re-parsed in wacky ways. The revealer at 112a is clued [“We’re only practicing,” and a hint to reading each starred answer] with the answer THIS IS JUST A TEST. 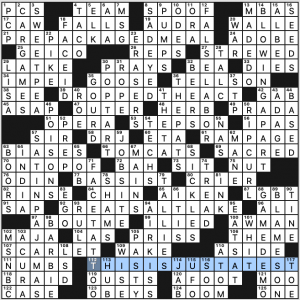 I’ll be honest, I didn’t stop to try and re-parse these during the solve. Your brain sees one thing (TOMCATS, e.g.), and you don’t want to slow your momentum by stopping to break it up into individual letters.

But once I did, I appreciated that they all made sense and were cleverly constructed and clued. I will say that the revealer feels off to me. “This is only a test,” feels much more common, probably due to the Emergency Broadcast System’s regular tests on the radio. (People still listen to the radio, right?). On the other hand, Google’s ngram viewer puts THIS IS JUST A TEST higher than the “only” version. So maybe I’m wrong.

There is a TON of sparkly fill in this thing. It’s truly impressive. However, it’s somewhat marred by a couple of non-trivial dupes (CAR GAMES / GAME DEMO and FACE I.D. / FACE TATTOO). But otherwise there’s FALSE LABOR, SWEET PEA, POP TART, SAD-EYED, JOB SITE, AIR KISS, and RIP CURL. And I really like that one row with ABOUT ME…”I LIED“…”AW, MAN!” There’s plenty of strong shorter fill as well. 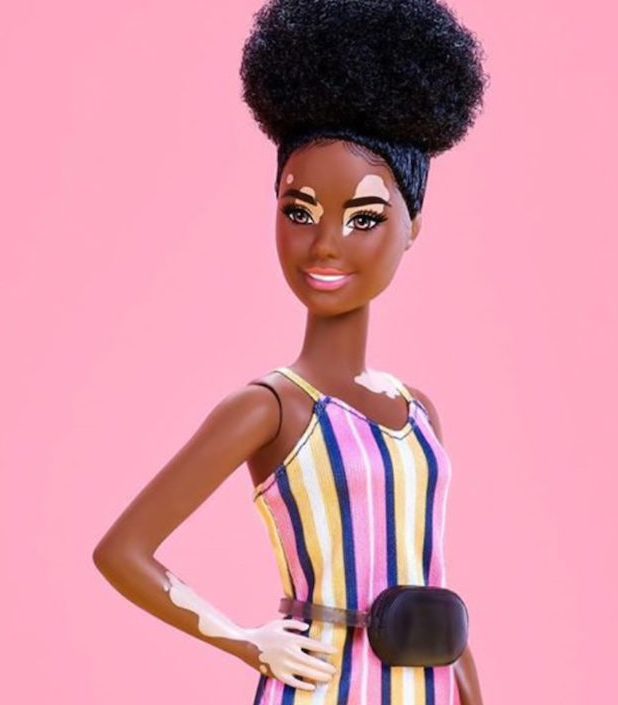 The new BARBIE doll with vitiligo

A slick theme, a load of great fill (minus a couple dupes), and fresh cluing add up to 3.9 stars.

The note in the byline says “Happy Mother’s Day!” Is this a mother/son collab? If so, that’s awesome. 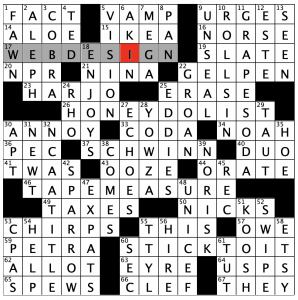 THEME: Common phrases begin with things that are sticky.

This was a delightful puzzle. Clean. Fresh. Colorful theme answers (love HONEY–DO LIST), and the grid has plenty of room to breathe allowing for good stuff like NCAA TITLE, ROLLS IN, GRAPE SODA, and my favorite… YOWZA. Has a pangram feel to it (no Q) without the pangram shoehorning that sometimes happens in order to get those high-value Scrabble letters in there.

Some new stuff for me:

HARJO. I feel like I should know this, but didn’t. Risky cross with ALEPH, but the latter is fairly common in crosswords, and I think the H is inferable.

PETRA. I had a student named PETRA. It’s very fun name to say. Probably because she always made everybody smile.

My only nit is the clue for VAMP [Improvise in jazz]. I’ve seen it clued like that before. I never think of VAMPing as improvising. Usually, I VAMP to keep time and chord structure while someone else is taking an improvised solo. I mean, are the VAMPs usually improvised? Sure. But that’s kinda like saying that treading water in a pool is swimming. I guess so, but not really.

Lovely puzzle! And this appears to be Karen Stock’s debut. Happy Mother’s Day indeed. Your puzzle was wonderful.