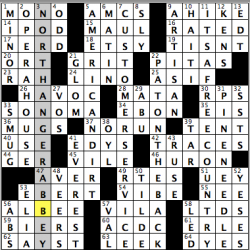 Hello everybody! Hope you all are doing well to begin the week once more!

It’s always a fascinating visual when the theme set are all downs, and this is no different. All of the five longest down entries end with words, all toward the bottom of the grid in location, that can come before the word “road.”

Second consecutive week that AMCS makes an appearance in the grid, and we’re not talking about the Loyola University Chicago Ramblers or Indiana Pacers here  (32A: [Pacers and Gremlins]). Oh, with with LINO, does anyone still rocking some linoleum flooring in their kitchen these days (24A: [Retro kitchen flooring, for short])? Did not see this coming, but seeing VILA in the grid made me think of how much the show referenced in the clue subconsciously impacted my family’s housing visions when we were watching network television in our project housing apartment (57A: [Former “This Old House” host Bob]). So many times, my dad and I would catch a glimpse of the show when channel surfing (before we got cable television) and he always either learned about what he would do with certain parts of a house if and when he got to own a house or thought about what he would do differently than what Bob was instructing. Either way, that show, in a subconscious way, kept our family thinking of the dream of finally being homeowners in America and what to do to improve the house if things went awry. Thanks, Bob!

“Sports will make you smarter” moment of the day: NEE (55A: [Abigail Adams ___ Smith]) – We get to talk about a fellow Brooklynite here, which is awesome! Former college basketball head coach Danny Nee spent three decades as a head coach in Division I at the University of Ohio, University of Nebraska, Robert Morris University and Duquesne. His most successful run came while Nebraska, where he led the Cornhuskers to 10 postseason appearances (5 NCAA, 5 NIT) in his 14 seasons in Lincoln from 1986-2000. In 1994, he led the Cornhuskers to a surprise Big Eight Tournament title, and in 1996, Nee and the Huskers won the postseason NIT championship.

Theme: Each theme answer is OFF TO A FAST START (57a, [Quick out of the blocks, and a hint to the circled letters]). The circled letters of each entry is a word or abbreviation meaning, “Get it done PDQ!” 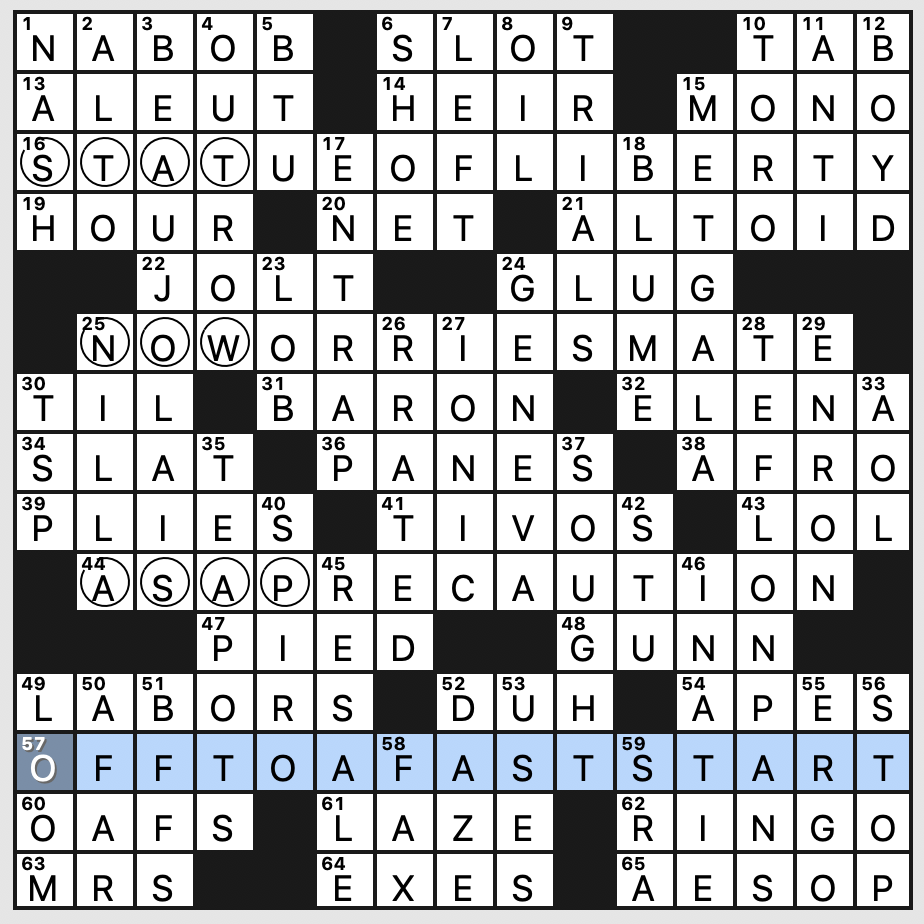 I wanted OFF TO THE RACES to be the revealer because it feels more fun, but obviously it doesn’t work to explain the other theme answers. The existing revealer, however, does, and is well-suited for a Tuesday puzzle.

BEAUJOLAIS is a lovely entry at 3d, but I would not have guessed that an O followed the J. Definitely needed the crossing for that letter. MET GALA is good as is the pseudo-mini-theme of TEAPOTS and TEFLON PANS. I’m looking askance at OUTROW, though.

Straightforward but solid theme and smooth fill throughout. 3.8 stars. 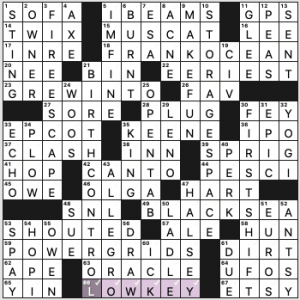 Okay, this is one of those themes where I’ll need to lay it all out to understand what’s going on (since the puzzle was pitched easy enough to complete it without paying attention to the theme). The revealer is 66a. [Casual … or a hint to the answers to the five starred clues], LOW-KEY. The starred entries are all Downs:

Solid theme. Particularly nice to have BIRTH CONTROL, STORAGE SPACE, and FIRST SHIFT in the mix. The term low-key gets a lot more use these days, with a shift in meaning and as an adverb rather than an adjective. I need a young adult to explain more thoroughly! Sometimes it seems to replace kinda/sorta, subtly, or not gonna make a big thing about it but….?

Overall the fill’s pretty solid. Four stars from me. 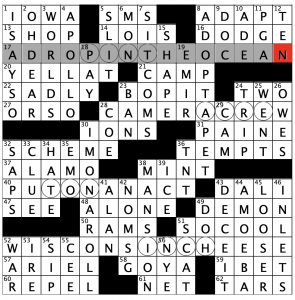 As far as hidden word themes go, this is spot on. Universal‘s hidden word themes typically are. They set a high standard for that type. Here, the base phrases are all lively and familiar, the measurements bridge the words in those phrases, and there is solid consistency in that all of the units of measurement are different (liquid, area, weight, distance).

Fill and cluing was also above par in this one. Here are some of my faves:

I’M ON A ROLL! and ADOPT-A-PET are a snazzy pair of pillars.

Let’s see… anything else? Oh yeah… Another Universal puzzle that should be solved with circles. Since last Monday, FIVE of the Universal puzzles were constructed with circled letters in mind. I feel this is a disservice to solvers who are unaware that this blog exists and don’t use Across Lite to solve puzzles (i.e. most solvers). That is because Universal is unable to publish puzzles that feature circles on its widely available platforms (online and on paper in syndication). The visual is lost when solvers are asked to count letters, and newer solvers (those with whom I’ve co-solved, anyway) often don’t understand the counting instructions at all.

I am completely befuddled as to why Universal publishes so, so many puzzles that should have circled letters when they are unable to provide that feature to the masses. It’s the only puzzle that I know of that intentionally offers two different solving experiences: Download from this site, or solve on paper/online in applet). The fact that they’re available on this blog with circles seems to acknowledge that asking solvers to count letters is subpar.

I do not enjoy making that argument every time it happens, but I truly feel it’s important to consistently point out that flaw as consistently as they publish puzzles that should have circled letters. Not the constructor’s fault at all. Puzzle itself was very good. 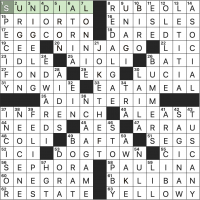 This was on par with a tough Saturday puzzle! This is one of the easiest grids to fill out, especially if the center square is a black cell. There is nothing in here longer than 9 letters. But Matt, in true Jonesin’ fashion, has all kinds of trivia stuff in here. (See the end of this post!) Many nominations for the Obscure Pop Culture Reference of the Week in this one! Probably too many to choose. This puzzle likely wouldn’t fly in a mainstream outlet, but still a fun solve, I think. A great example of what indie puzzling can be. 4.3 stars from me.

I just found out Matt is in the following video in the finals of the Connections Online Quiz League! I have never heard of this, and I may sign up myself, but I hear this is a great watch. I haven’t watched it either, but I hope you enjoy! 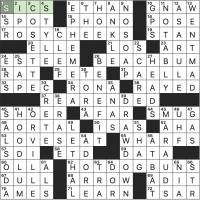 We have a name that was not in the constructor database on this site! This puzzle is certainly on the “cheeky” side; very funny!

Hilarious! I didn’t quite laugh out loud, but this is pretty funny, in a 5th grader sort of way. Which is right up my alley! If this is in fact some sort of debut, congrats to Tom Locke! Please make many more! 4.3 stars from me.