This week we’re told, The answer to this week’s contest crossword is a two-word candy brand. There are four themers with parenthetical numbers for clues:

TURINSRIVER is PO, which is (2) letters long. The other “parts” fell quickly. PERCHEDATOP is ON (2). THATFEMALES is HERS (4). FUNNYPERSON could be either WAG (3) or WIT (3). In grid order, WAG forms the nonsense string WAGHERSPOON, leaving WIT: 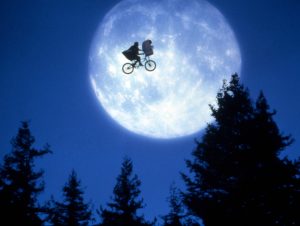 Reese’s Pieces were popularized by the movie E.T. the Extra-Terrestrial. The production company behind E.T. initially wanted E.T to eat M&Ms, but was rebuffed by Mars, Inc. in one of the greatest marketing misfires of all time. Hershey, Inc. wisely agreed to plan B, allowing E.T. to eat Reese’s Pieces, and sales went to the moon.

I’ll leave you with Bits and Pieces, a Dave Clark Five song covered by Joan Jett and the Blackhearts on the album I Love Rock’n Roll. Here’s Joan Jett’s live version, performed during Dave Clark Five’s induction into the Rock and Roll Hall of Fame.