Hardly a month goes by when there’s not a problem with the WSJ puzzle on their site. Martin, our resident puzzle acquirer, can sometimes finesse the problem such that the .puz version we get works just fine. Sometimes, the .puz version is messed up as well, like today (as of this writing).

And the problem never seems to be the same thing twice. This time around, there are no Down clues after 5d. Go figure. And while people complain in the WSJ comments section, no one in authority seems to monitor those comments, and the problem goes unsolved for hours.

Anyhoo, all that is to say that I solved today’s puzzle via a combination of the .puz version for the Across clues and the .pdf version for most of the Downs.

The title of the puzzle is “Like a Boss” and each theme answer is a familiar phrase in which the final word can be a synonym of “command.” The clues are colloquial phrases that either are or are being interpreted as commands. 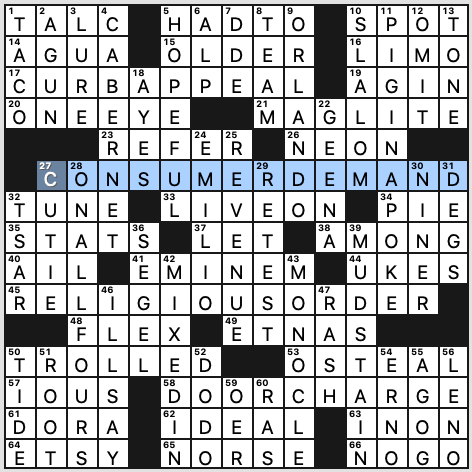 Even though the first one’s a little wishy-washy, I like the theme as a whole. It took a while to suss everything out (especially with the cluing problems), but it was worth it, and the puzzle provided a nice little aha moment.

There’s some good stuff in the fill, especially PIG IN A POKE, ON ALL FOURS, CABERNET, Mr. Peanut’s MONOCLE, “I’LL SAY,” and ORLANDO. The SE corner is a little rough though with green paintish MUD STAIN, new-to-me ETNAS [Bygone lab heaters], OSTEAL, ERNO, and AGOG clued weirdly [Eagerly curious] (to me, it means visibly stunned or dumbfounded). 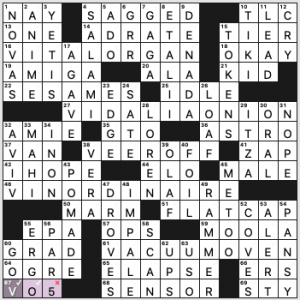 The theme would be a lot more fun if all the theme answers were as zesty as a VIDALIA ONION. And the rest of the puzzle would be more enjoyable if the six thematic entries didn’t lock down so much of the grid. Plural SESAMES, cognates AMIGA and AMIE, FLAT CAP ([Short-brimmed hat known as a bunnet in Scotland]?!), RAMMER (is this an actual thing, this [Powerful tool for compaction]? it’s not in my vocab) … just felt like there were a few more compromises than I like to see.

3.25 stars from me. Enjoy your Wednesday! 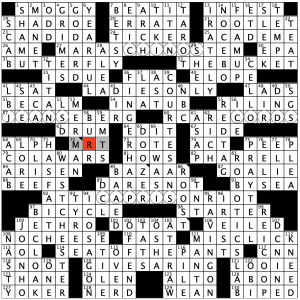 This week’s AVCX is a guest puzzle, a massive 22×22 grid from Max Carpenter, so you’re getting a super-sized shot of the grid to the left.  There’s some circled squares that lead the way to all of what’s going on:

Looking in the four black squares below each circled type of pants, you could definitely place a KICK to make the clue next door make more sense:

I didn’t catch it on my first pass through the grid, but I really liked discovering it after the fact. 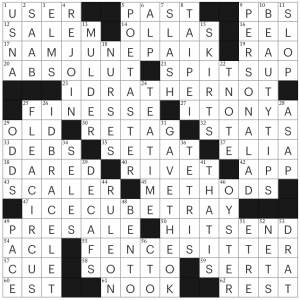 I love waking up to a Wyna Liu puzzle!!! This one was full of fresh entries and fun clues, with a few bits of fill I could live without, but nothing deal-breaking! I especially loved the abundance of crunchy long entries: NAM JUNE PAIK / I’D RATHER NOT / ICE CUBE TRAY / FENCE SITTER / FLEA CIRCUS / ID BRACELET / PERSONAL AD / BEAUTY TIPS / POETASTER / GIVE THE OK. That’s a whopping *10* excellent long entries. Whew!

This definitely took me longer than the average Wyna puzzle, partly because it’s a Wednesday instead of a Friday, but also because that NW corner was a doozy. I didn’t know NAM JUNE PAIK or the (truly incredible) word POETASTER, and I had NAVY instead of USNA for the majority of my solve (should have noticed “Sch.” at the start of that clue). I also wanted IKEA for SAAB (lol), and never watched the X-Files, so my solve in this corner was just a mess. I went through so many possible answers instead of POETASTER [One whose feet really stink?], none of which actually made sense but which cracked me up anyways: PODIATRIX (??), PODCASTER (lol), PODTASTER (?!)… the list goes on. After the solve I googled POETASTER and found that it means  “a person who writes inferior poetry,” and now I give that clue 12/10 stars and will be incorporating this word into my daily vocabulary.

Overall, tons of stars from me. Happy Wyna Wednesday, everyone! 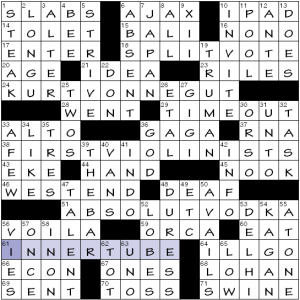 Solid theme, and not a bad set of sets. 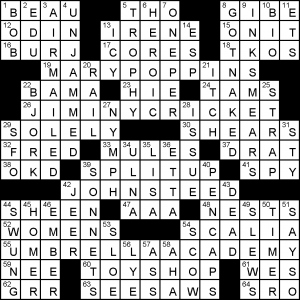 I’m not up with current TV, so I hadn’t even heard mention of this show, THEUMBRELLAACADEMY, until now. That said, it seems to be a current “a-list” show. The idea of an alternative fictional team of superheroes (in a more loose sense) who literally have an umbrella as a trademark is a brilliant repurposing. The three figures are from much older pop cult: MARYPOPPINS, JIMINYCRICKET and JOHNSTEED: a cast iron and varied set.

The rest of the puzzle seemed to play very easy, possibly due to the name-y theme? The fill was also squeaky clean, with few squirmy moments.

Two-fer:
BURJ, [… Khalifa] – worth noting if you didn’t know it yet. It will appear again.
FRED, [“Best in Show” actor Willard] – meta-answer!