Note: Fireball is a contest this week. We’ll review it after the submission period ends.

I know what you were thinking: “Yet another puzzle based on the periodic table of elements.” That’s what I thought, too. But nope, this one’s about CLASSICAL and GEOMETRIC elements (34a and 42a, both clued [Type of elements hidden in the starred answers on this side of the grid]). 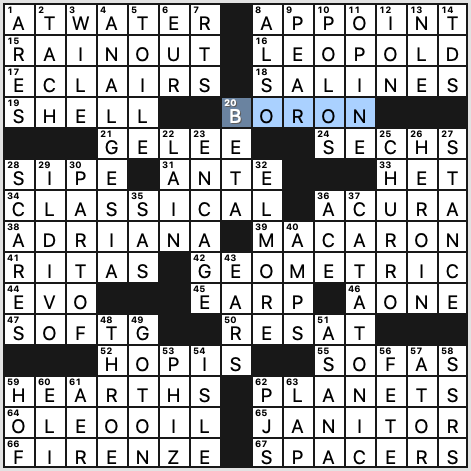 On Team CLASSICAL we find:

And opposing them on Team GEOMETRIC:

I resisted putting in GEOMETRIC because I’d never heard of “geometric elements.” Is that a term (math) people use? Googling the term I get plenty of hits, but then digging deeper I see one site includes Curves, Angles, and Surfaces as elements, and another one includes Hyperplanes. None seem to list Space as an element. So to a layperson like me, it seems less well-defined. But I did note and appreciate the progression from a zero-dimensional Point to a three-dimensional Space.

But why? Why these two sets of elements, and why are they placed in opposition to each other? It’s like having two themes in one, and I’m not sure the puzzle is better off for it.

It’s ambitious to have 8 theme entries (even if they are shorter) and 2 revealers. And there’s a surprising amount of nice longish fill: ANALGESIA, CATATONIC, CHURRO, RAIN OUT, LEOPOLD, MACARON, JANITOR, and ELMORE Leonard. Very nice! 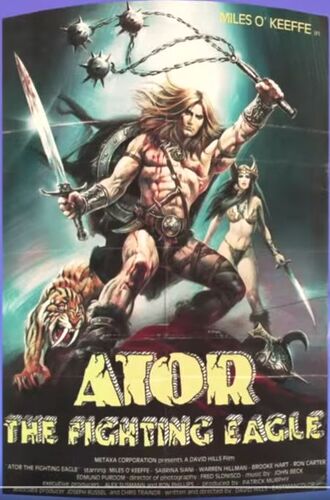 An ambitious theme which is probably too ambitious. The fill suffers. A lot. 2.75 stars. 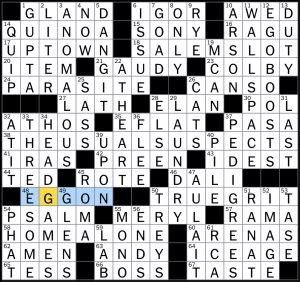 Today’s puzzle is another entry from Andy Kravis, Natan Last, and the fine folks at J.A.S.A.’s crossword class.  Let’s see what this group cooked up this time:

Each answer is a movie title (released in the year clued in brackets) that can answer the question posed by the movie title in the clue.  It’s very cute and very clever – well done, all!

Does anyone else’s brain start playing this song when they see the word UPTOWN? Just me?

If you screwed up solving this puzzle, you’re on the right track.

THEME: Common names/phrases that begin with a synonym for “error” 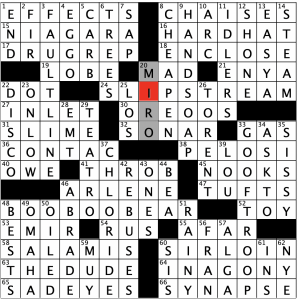 Very impressive grid! Has a rather themeless look to it, and with all those longer entries in the fill, it wasn’t immediately apparent where the themers would end up in the grid at all. At 74 words, it is over the standard themeless limit, but not by much.

Regarding theme, SLIP STREAM was newish for me. Rings a bell, like something my dad taught me about while I was busy not paying attention. GOOF TROOP was fun to uncover. One of those shows I completely forgot existed and it was neat to see it stored in the attic of my brain. FAULT as a theme word felt a bit off compared with the others. I don’t quite equate it with SLIP, GOOF, or BOO BOO.

The real highlight of the grid was the fill though:

63A [Jeffrey Lebowski’s nickname] THE DUDE. For the win right there.

30A [Post cereal inspired by a cookie] OREO O’S. Not the first time I’ve seen it in a grid. I can imagine that some might not like the strangeness of how it looks. I think it’s so funky looking that it’s great.

16A [What covers a dome in construction?] HARD HAT. Ha!

65A [Facial features that could aptly be blue?] SAD EYES. Embracing the double meaning of the word “blue.”

9D [Cake associated with good health?] HAND SOAP. Cute clue, though I usually think of HAND SOAP as being in the liquid form.

42D [Puzzles in which a ewe may mean “you”] REBUSES. Reminds me of that game show that Alex Trebek hosted, Concentration.

Typically, when clues are starred, there’s a revealer with a clue that mentions something about those stars. Unless I’m missing something, I don’t see one here. I think they’re just starred out of caution that solvers may not realize they are themers with how wide open the grid is (14 seven-letter entries that aren’t theme!) 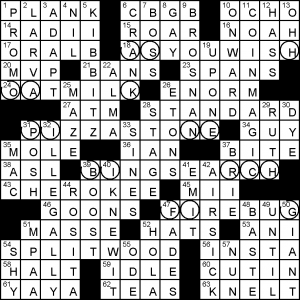 Short tree names are a well-trodden path for themes. In this case, that is combined with the “top and tails” treatment revealed at SPLITWOOD. The trees are: ASH, OAK, PINE, BIRCH and FIG; with only one doubling as a fruit.

The puzzle played a little harder for me but in the end I’m not sure why. I think I made a few silly errors like CHEYENNE for CHEROKEE. 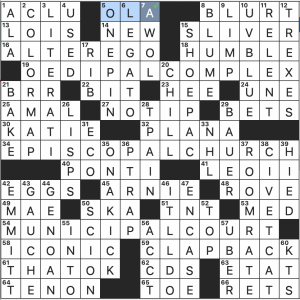 And in case we didn’t get it, Brendan included a revealer at 59a [Return fire on social media, or this puzzle’s theme]: CLAP BACK.

Gotta run! What I didn’t know before I did this puzzle: that Arcade Fire has a song called “UNE Année Sans Lumiére.”