Adrienne Atkins makes her NYT debut with this puzzle and it’s a good ’un. I look forward to seeing more of her work! Each theme answer is a two-word phrase made up of body parts. Very Frankenstein, not at all monstrous. 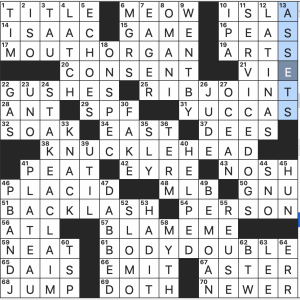 And a revealer at 61a – [Stand-in during a film shoot…or a hint to 17-, 25-, 38-, 51-Across] is BODY DOUBLE. I like this theme! While it may well have been done before in some version, I don’t remember seeing it. It’s consistent and accessible. A good Monday! 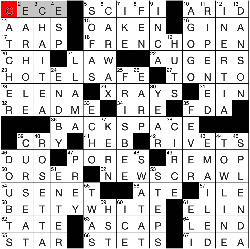 I’m gonna need a little SPACE for this posthumous effort from Gail Grabowski and (still very much alive) Bruce Venzke. Some BACKSPACE, that is. That’s the revealer at 36A [PC key with a left-pointing arrow … and a hint to the last words of answers to starred clues], which tells you that BACKSPACE means that the BACK, or second word of each two-word theme entry, is a type of SPACE.

I could stand to see Ted DANSON clued with a more modern reference than Cheers. (Hello? The Good Place was amazing, and Mr. Mayor seems to be doing all right.) I also think Brian ORSER and ELIN Hildebrand are out of place on a Monday. On a more positive note, fave clue: 1D [Mask wearer at home] for CATCHER. Given the year-plus we’ve all had, it gave me a chuckle. 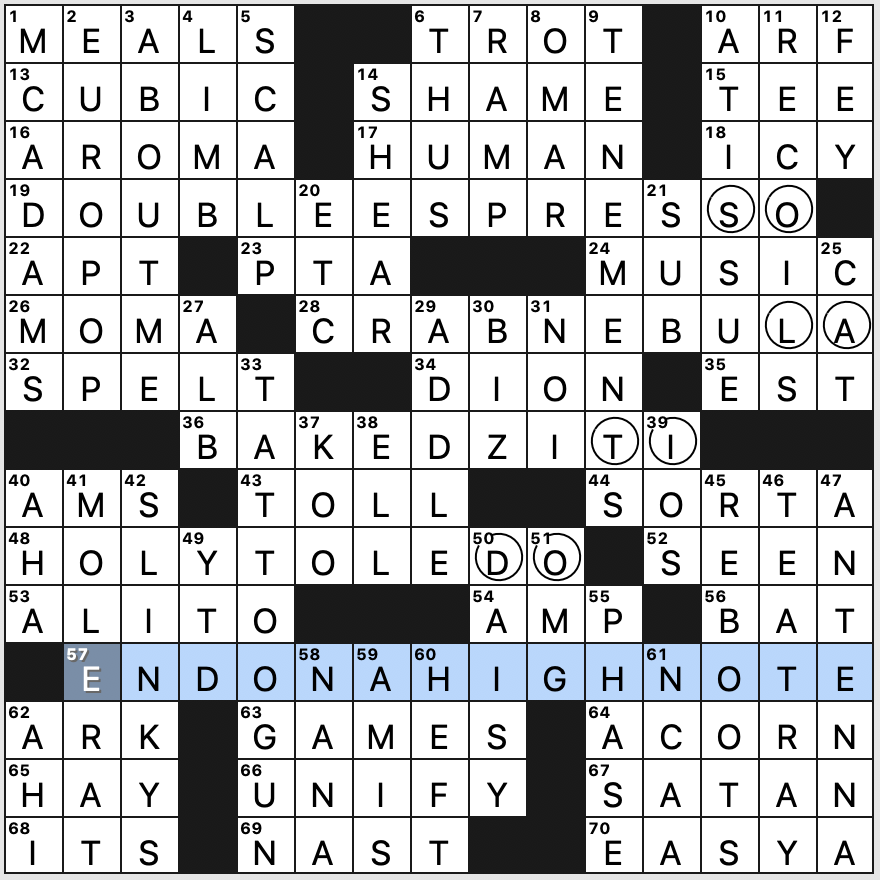 Of course, whether or not these notes are high depends on the octave, but at least they’re higher than re, mi, and fa. I’m going to assume that do is high do (if that’s a term) and not low do.

One doesn’t need this many theme squares to get the theme across, but these are fun entries, especially when you try to sing them.

I also appreciate that the revealer is an awkward 14-letters in length, requiring it to go in the 12th row and causing the other themers to squish together with only one row separating each. THUS we get entries like NOI and KOO, but considering the constraints, that’s not too bad.

I never knew a TATTOO GUN was called such, but now I do. TENEMENTS is somewhat of a downer, but since it’s crossing three themers, I’m sure there weren’t a lot of choices that would work there. Elsewhere I liked the MOLE RATS / SLINKYS mash-up.

Clue of note: 63a. [Cranium and hearts, e.g.]. GAMES. Tricky. Do people play the Cranium games much anymore? We’ve played a number of them over the years. One of our favorites is Whoonu which is very simple to pick up but is fun for everyone—adults and kids. What’s your favorite Cranium game?

A light theme, but a lot of theme material. Some kludgy fill is to be expected, but on the whole, it works well for a Monday. 3.6 stars. 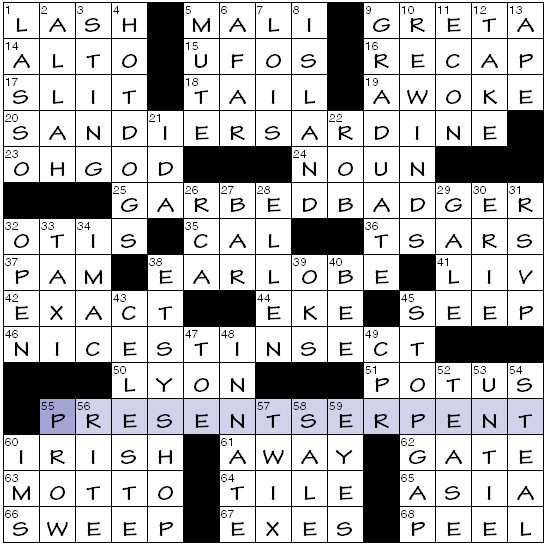 Much like our ophidian friend, these theme entries seem just kind of there. Or maybe that’s a reflection on my current state—it’s Monday morning and I’ve AWOKEn (19a) exhausted from troubled dreams, not to find I’ve been transformed into some kind of INSECT or a vermin {Minerva}, but merely to feel present. I won’t make it melodramatic and say I’m acutely feeling the burden of existence or anything, I’m just kind of … there. 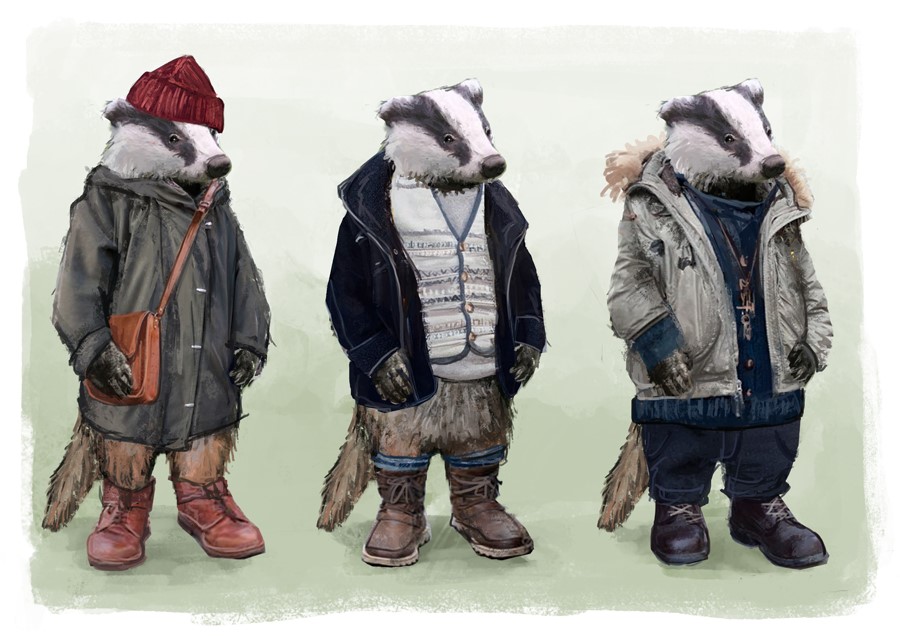 I feel this crossword would have felt crisper and cleaner if other animals had been eliminated from the grid (not to mention the clues). Looking at 4d HOT DOGS {gods}, 13d APE {pea}, 40d BEE {–}, and not-really 50a LYON {only}. 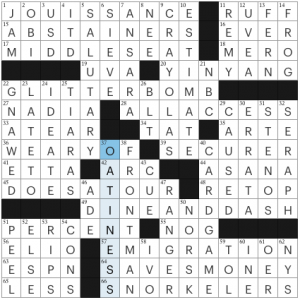 Wow, heckuva way to start the puzzle, with a 10-letter French word associated with a psychoanalyst of yore. [Feeling of enjoyment that “begins with a tickle” and “ends in a blaze of petrol,” per Jacques Lacan]—that’s an awfully long clue to provide me with no path to the answer! The French word ending was inferrable, somewhat, but whoof, the rest of JOUISSANCE flew over my head.

Crossing that was an utter gimme for me that may have vexed some anti-current-pop-culture solvers: 18a Desus & MERO (love them!) meets REMY Ma.

Fill that felt a little iffy to me: OATINESS, ABSTAINERS, DOES A TOUR, SECURER (not sure anybody anywhere has ever used that roll-your-own word to refer to a safety pin), RETOP. And then STENOS feels old. If you add some A.I. to STENOS and mix it all up, you end up with OATINESS.