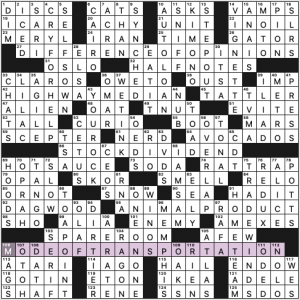 This new constructor brings us a mathy theme:

Interesting theme approach, not a riff on the usual standard wordplay themes.

The puzzle title had me thinking we’d be adding Fs (or changing specific letters to Fs) in the titles of films, but that’s not the case. What is the case is that the entries are famous movie quotes, but they’re clued as if they came from a different movie which is somewhat thematically related. 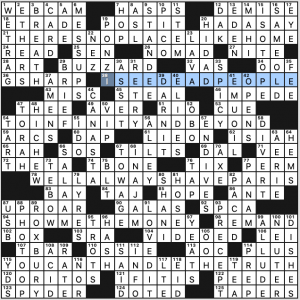 YOU CAN’T HANDLE THE TRUTH!

This was fun. And since the quotes are so recognizable, it only took a few crossings of each one to fill them in (once I cottoned on to the theme). So it made for a fast solve.

Since there’s quite a lot of theme material, there aren’t so many long entries in the fill. I like BUZZARD, SAME OLD, ROXBURY, and HI-CHEW [Japanese fruit candy brand] which I don’t think I’ve ever seen in a grid before, but which I’m sure I can find in a cupboard around here. I have to give EMU OIL [Australian bird’s liquid product] the side-eye. Is this really a thing? Are there other critters from which we extract oil?

Everything else is within parameters, and the clues are mostly on the straightforward side. Let’s put this one at 3.75 stars.

This menu takes us all around the world. Each theme answer is a food that includes a place name clued literally. Easier to show than tell. 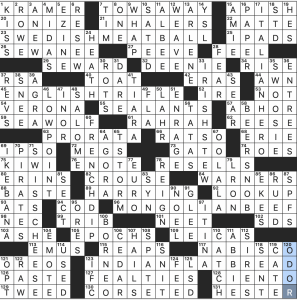 There were a couple of wincey moments in the fill. EZINE needs to go away and stay away. FITB IN OR for [Are going ___ not?] is not good.

It’s too hot to sit here and type. What I didn’t know until I did this puzzle: that Ulaanbaatar has changed the Anglicization of its name.

Apologizes for an afternoon write-up! I was out enjoying SPRING early this morning.

THEME: SPRING is spelled out, gradually, in common phrases. 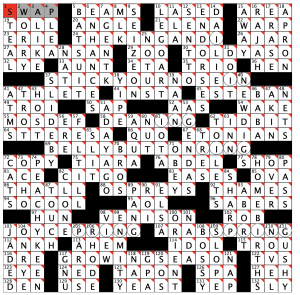 A complete 180 after two weeks of zaniness to something right over the plate. Solid revealer, solid idea, solid puzzle, but for me it had a very 15×15 crossword feel, thematically. Of course, with SPRING being six letters, it would be hard to pull off in a 15x, but that’s just how it felt to me.

With the title in mind and the first two themers circling the I, then IN, I could’ve sworn the circled letters were going to spell out IN UTERO, which I found very, very strange (yet not strange enough to dismiss as a possibility… Perhaps a Nirvana tribute?)

Flew through the fill here, which was the highlight for me. PEACHY KEEN, NEW DIGS, BAT SUIT, HOME BIRTHS (plural!). Nowhere where I really got hung up.

Two very new names as theme answers was surprising for me. However, I just noticed that SPRING is growing entirely at the ends of the themers (in fact, it’s an entire stand-alone part of each entry). So ING and PRING as last names should’ve been easier to infer with the synergy available on tap.

Not really sure what else to say. Everything was good. Just didn’t have the exciting edge (for me anyway) that Evan’s puzzles usually do.

Enjoy the rest of Sunday!

THEME: Phrases that begin with animals (though not in context) 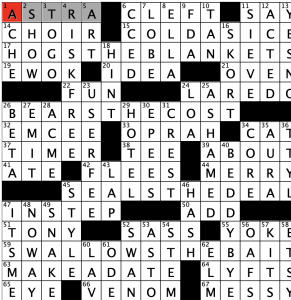 I like how all the animals are plural too. This is a nice, evenly conceived and executed theme. See any other animals hiding in the grid? Sure! There’s a CAT, a SNAKE (whose VENOM comes in the form of [Hate mail content], a SWAN, and some baby foxes… KITS! Let’s throw in an EWOK to make the zoo really interesting. And keep ’em all together with a YOKE.

Almost time for BEDDY BYE for me! (that’s a winning bit of fill right there)