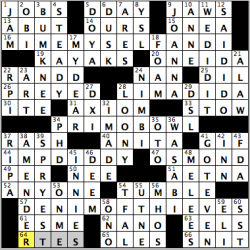 Hello everyone! Hope you all are doing well as we fast approach the unofficial start of summer and Memorial Day.

Today’s puzzle features some personal butting in with the theme entries, as the letters “IM” are included in phrases to create some pretty cute puns.

There is a decent chance that I have used T-FAL pots and pans in the past, but definitely never heard of the company until coming across this interesting fill in today’s solve (54D: [Big name in nonstick pans]). What I definitely have come across in my lifetime, however, is a BUM KNEE, and love the clue and the entry (3D: [Crummy joint]). Can almost hear my balky joints creak a little when filling in the entry. Mind blanked just a little bit on JOANNA as I knew of her counterpart/husband Chip (9D: [“Fixer Upper” star ___ Gaines]). Guess I need to put more of the names of the stars of all those HGTV shows into memory more. If so, then maybe I’ll know more about home renovations and such, which can never be a bad thing.

“Sports will make you smarter” moment of the day: JAWS (9A: [Killer shark flick]) – Before Brett Favre became the ironman of NFL quarterbacks, that title used to be held by former Philadelphia Eagles quarterback Ron Jaworski, nicknamed “Jaws,” who started in a then-NFL record 116 consecutive games between 1977 and 1984 before being surpassed by Favre. Jaws was a pretty good quarterback after he came into the league from Youngstown State, and in 1980, was the NFC Player of the Year in helping to lead the Eagles to their first Super Bowl, where they lost to the Oakland Raiders in Super Bowl XV. For many years, Jaworski was a television analyst at ESPN, including being one of the few people to be named to the broadcasting booth for Monday Night Football games. 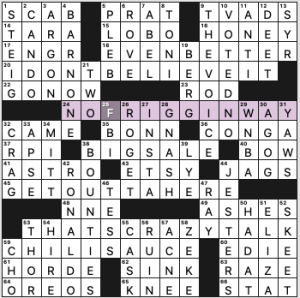 An emphatic and surprised “No!!” is the theme here—things you might say when you are told something that beggars belief:

Fun theme, though there are variations on the phrases that make it perhaps a bit tricky for a Tuesday.

Fave fill: EVEN BETTER, CHILI SAUCE, BAR NONE, RONALDO, THE VOICE, ZEKE (only a faint recollection of 58d. [“___ and Luther” (onetime Disney Channel sitcom)], but I’m always good with a Zeke).

I’m not a morning person, but this puzzle was a fun one to wake up to :)

THEME: “A.M.” is added to the top of common phrases, creating wackiness. 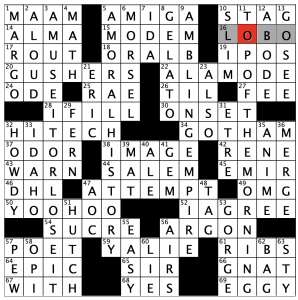 Very enjoyable start to the day, which started way earlier in the A.M. for me than usual because I have two giant Great Danes who decided to play a game called Let’s-See-Who-Can-Step-On-Daddy-More at 4:30.  It’s odd to go to bed knowing that you will have some sort of painful experience waking up.

I liked all the themers. Technically, the revealer is a bit off (the morning is at the TOP of the phrases… nothing is really at the TOP OF THE MORNING), but it’s a fun 15-letter phrase that gets at the gist, so that’s good enough for me.

TOP OF THE MORNING to ya’! 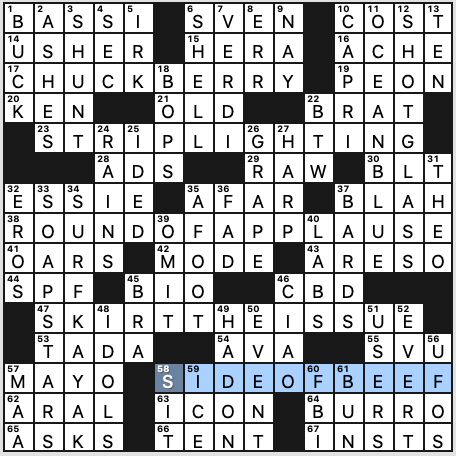 I won’t go through where these cuts come from because I’m sure some are not interested. If you always wanted to know, try looking here.

BASSI is not the greatest way to start off your grid, and INSTS isn’t a great way to end it, but thankfully, most everything in between was good.

A solid grid, but not everyone will enjoy the theme. 3.5 stars. 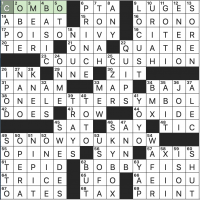 Sorry for the delay! We have another clever theme today. How well do you know your periodic table? 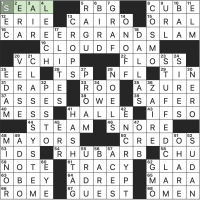 I like it when these themes seem so simple, and yet I feel like an idiot that I cannot come up with similar ideas:

Did I miss any? I think there were just the four theme answers. I think that is all of them, since each one of the ways to split CLAM is used just once. Elegantly done! I think these two collaborated on another puzzle I blogged on a random Tuesday, and they seem to make a great team! 4.5 stars from me.