Theme: INSIDE JOKES (61a, [You might not get them, and what the circles contain]). Well, not really. Those aren’t “jokes” inside the other themers, they’re the results of jokes. 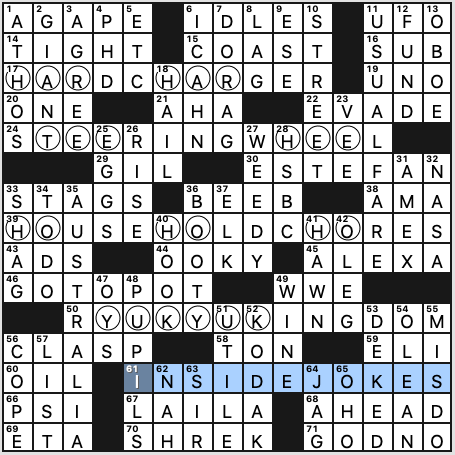 Despite my quibble about those hidden words being “jokes,” I enjoyed the theme entries, including the last one. What would be a better revealer? I’m not sure, but maybe something having to do with laughing on the inside.

USUAL FARE and AUSTRALIA make for nice marquee non-theme entries. I also liked seeing Gloria ESTEFAN, and GO TO POT is fun (though I wanted GO SOUTH to answer the clue [Deteriorate]).

I cahn do without ICAHN and OLEAN, though. I’m fairly familiar with HSBC [Europe’s largest bank], since I lived in England for a time, but I don’t know about the average solver. I would have thought Deutsche Bank was bigger. Hmm. According to Wikipedia, BNP Paribas is biggest with HSBC at number two. Deutsche Bank is down at number eight.

And that’s all I have. I like the theme, but the revealer doesn’t work. 3.3 stars. 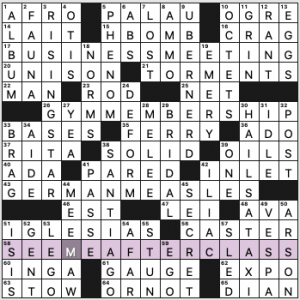 The theme revealer is 58a. [Ominous request from a teacher … or a hint to the first words (and following letters!) of 17-, 26- and 43-Across],
“SEE ME AFTER CLASS.” Those other themers (BUSINESS MEETING, GYM MEMBERSHIP, GERMAN MEASLES) are phrases whose first word is also a high school class (at some schools), and the second word starts with ME. SEE that ME that comes AFTER that CLASS?

Did not know: 38d. [Major pilgrimage destination in Spain], SANTIAGO.

Fave clue: 13d. [They run when they’re broken], EGGS. This is fine so long as those eggs will be thoroughly mixed, for an omelet or a baking recipe. Do not come at me with runny eggs on a plate, with whites and yolks not fully immixed! 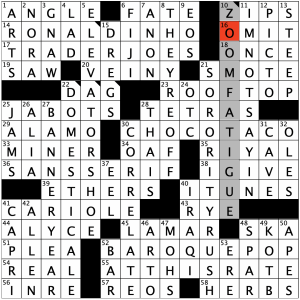 It’s a themeless week at the AVCX!  This week’s puzzle is a collab from Quiara Vasquez and Brendan Emmett Quigley, and as editor Ben Tausig put it, they’re a real power duo. 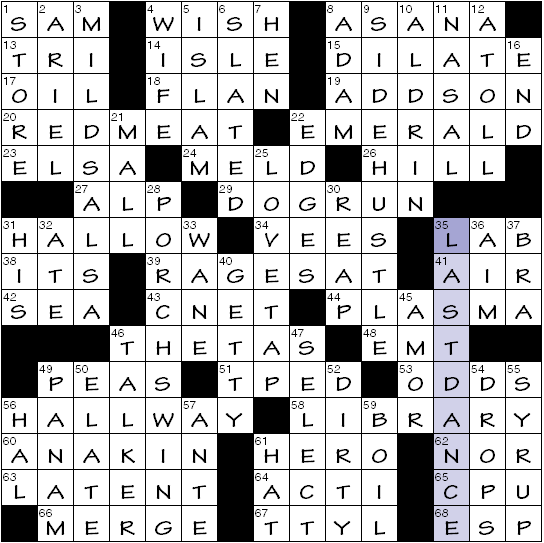 Not sure that this theme hasn’t been done before, but there’s nothing wrong with dipping back into the well every so often. 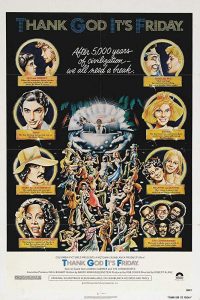 Salsa, swing, tap, hustle. Wasn’t sure that swing was correct as a name rather than a genre, but Wikipedia gives it some credence as a standalone term, despite listing all sorts of types in the category.

Solid and well-made crossword, but not super-exciting.

this is not disco 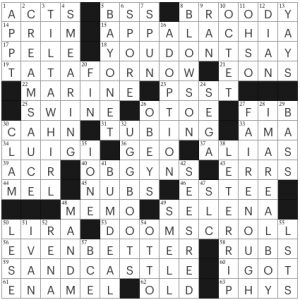 Four stars from me, because the five-star long fill is offset by the short glue. 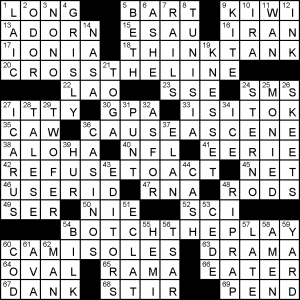 We get an interesting double theme today. DRAMA is the revealer and we have, in order, LINE, SCENE, ACT and PLAY. Further, each phrase is DRAMAtic: CROSSTHELINE, CAUSEASCENE, REFUSETOACT and BOTCHTHEPLAY; quite a broad secondary theme, but makes for a doubly fun revealer!

Clue-wise the puzzle played quite easy but with a few tricky names. RIPRAP and KNESSET I knew, but could see them proving tricky for some solvers. My error was at ISITOn/SnEETS. I have never heard of the superhero Booster Gold or SKEETS. Will I be alone?