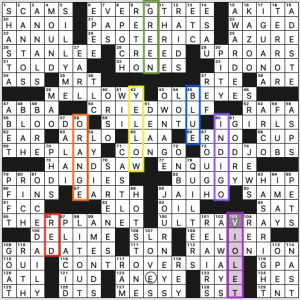 This theme requires coloring to appreciate it fully. The book title “Gravity’s Rainbow” is reimagined as a rainbow in which the colors are all subject to gravity—the Across theme answers take a downward turn to fill in the color words that don’t fit into the Across spaces, and the color names appear in roughly a rainbow-arced array in spectrum order. Here are the themers:

Five more things before I go to pick up my Lou Malnati’s pizza (sorry, Matt):

Quickly because I have a bead-making lesson in 20 minutes…each theme answer finishes the title phrase appropriately for the character named in the clue. 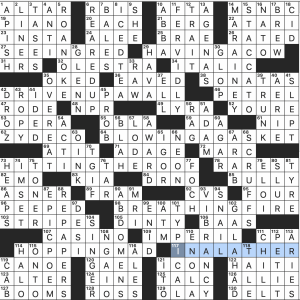 I really liked this theme! It’s kind of a Tom Swifty variation and it was fun to solve.

What I didn’t know before I did this puzzle: that Avenue FOCH is Paris’ widest street.

THEME: Clues that sound like single letters are referring to a common phrase (that explanation doesn’t quite do it justice as there’s a bigger picture). 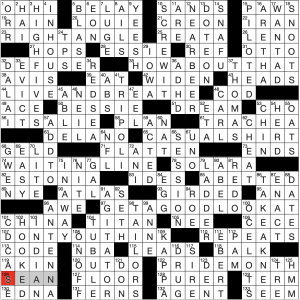 This is one of those “Wait for it….” type puzzles. Felt relatively standard to me as I solved steadily from North to South, yet I knew there was a layer that I wasn’t aware of. While I had noticed the many references to the LGBTQ+ community, I simply did not make the connection with the letters in the clue until the revealer, which I suppose is probably for the best. Makes for a fantastic AHA and the gimmick wasn’t obvious enough along the way.

Of course, I should’ve caught on when I got to [Queue] because there are a lot more letters that would work and not result in an awfully weird entry such as WAITING LINE (also known as… a LINE).

Shoutouts to the LGBTQ+ community that I caught included:

And probably many more that I’m missing after that sweep of the grid.

I had a very ugly mistake that was difficult to find. Instead of SCREW IT for 10D [“Who gives a damn? Let’s just do this!”], I had SURE WIT. I just assumed it was an old-timey phrase I’d never heard of after having S?REWIT in the grid and assuming I needed a vowel in the ?. And I totally blanked on CREON despite very much knowing that. Not a Natick at all… just a really ugly misstep on my part.

Overall, another gem of a puzzle. The Birnholzian revealer made the otherwise standard solve well worth it.

THEME: Phrases that start with P(vowel)R? I think? I may be missing something. 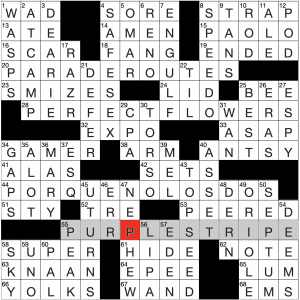 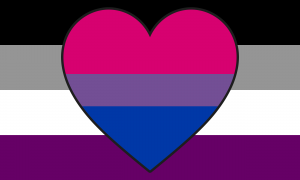 Well, I really enjoyed the puzzle and the resulting things I learned, despite my lack of confidence in understanding the theme. Strong nods to bisexuality with the last three themers. I was unaware of the existence of a biromantic flag, and therefore knew nothing of the symbolism behind its stripes. It’s quite a nice flag. I think the LGBTQ+ community could give many a world flag a facelift, and we would be better for it. I vaguely recall learning of the aptly named PERFECT FLOWERS before. And uncovering the Spanish phrase was fun.

Still… the theme from a technical standpoint has me scratching my head a bit. I think it’s because the title, Set a PR, coupled with the first themer (PARADE ROUTES) seems to suggest that we will be uncovering two-word phrases where the fist word begins with P and the second begins with R, right? But that’s not the case. The only other thing that I could see that connects them is the P(vowel)R connection of the first word, where the vowel changes (yet I is excluded). I mean, I am solving this pretty late with a mojito next to me, so I apologize in advance if I’m not seeing something that I should be. Whatever. It really doesn’t matter all that much. The fill and theme-phrases were dynamite all around.

K’NAAN, Awkwafina’s real name Nora LUM (a bit of a dangerous crossing with SEPTUM. For a hot second I thought the U was an I), the gender-neutral term Nibling (in the clue for 47D), PAOLO Montalban,

Only fill nit is AT CAMP, which doesn’t strike me as a stand-alone phrase.

Overall, thoroughly enjoyed the fill and the cluing. Out to lunch on the theme. That’s kinda bothering me. Do the letters PR have a significance in bi culture? I googled for a bit, and I can’t find anything. Ok. I’m gonna stop thinking about it.

4.1 stars on fill. I’m going to skip the rating for the theme because I think I’m missing it.

Theme: Numerous phrases with the trigram PRO turn right or down at the R.

Solid theme, wonderfully executed with fun entries. I don’t see anything to not like here. Well, actually, I could do without the awkward letter counting in the clues, but that seems to be the thing with Universal puzzles; they need to be accessible to the newest of solvers.

But this construction is really impressive. It must have been a bear to cross all those entries and get everything to fit nicely and play together. Well done.

And yet our constructors still left room for some nice fill: SHOWTIME, QUEER EYE, MISSOURI, LEAPFROG, Ed (or Fiend’s Dave) SULLIVAN, FACE TATTOO, IMOGEN HEAP (love that name!), CALYPSO, PTOLEMY, SOAP DISH, GAG REEL, GLACIER National Park, MOUSEPAD, and MAKEOVER. THIN LINE feels like a long partial mainly because it reminds of the song “Thin Line Between Love and Hate” which I know mostly from The Pretenders’ cover version, but was originally by The Persuaders (see below).

A couple of brand-new-to-me entries: