Over the past year, John and Brad have worked together a lot—John cohosts (with Andrew Kingsley) the various Boswords crossword tournaments, and Brad has been the Boswords crossword editor since the Fall (2020) Themeless League, if not before. Heads-up—the next Boswords tournament is another virtual one, on July 25. Registration opens July 1. Juicy details, including that hot constructor line-up, are here. 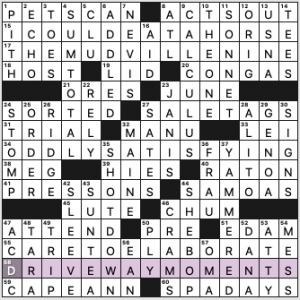 I do wish this puzzle had been spaced out a bit more from the June 18 NYT, which also had CARE TO ELABORATE in the grid. It’s a great entry! But less “ooh!” when it’s only been a week since the last time you saw it in a puzzle.

Did this puzzle kick your butt? My mind might have been elsewhere, because this puppy took me about 40% longer than last Saturday’s NYT. If only I’d had the confidence to posit ATL for 8d. [Home to the Trap Music Museum: Abbr.], I’d have made quicker headway in that top stack.

Fave fill: THE MUDVILLE NINE, ODDLY SATISFYING, DRIVEWAY MOMENTS (I don’t have a driveway, but I definitely have parking lot moments while listening to WBEZ on the car radio), PRESS-ONS, SUM TOTAL (loved the clue, [Entirety, redundantly], since that hadn’t been a glaring pleonasm to me before … but George Carlin knew it), ADDLED, SHOT DOWN, SHE BOP, and YAMMERED.

Four stars from me, with grudging acceptance of CLU and –EAN as the price for some stacked 15s.

I predicted I would forget about temporary (?) Themeless Saturdays last week. I was right again. But that makes it more fun because it’s always a pleasant surprise. 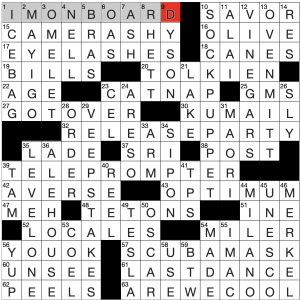 Coulda sworn that it was OPTIMAL instead of OPTIMUM, which led me to almost believe that I’ve had Angela MERKEL‘s name wrong forever and that her name (or perhaps her predecessor’s name of whom I was unaware?) was Angela LERKEL.

Still diggin’ Themeless Saturdays here. And they are extremely accessible to most solvers imo. Tougher than the normal Universal bar, but not by all that much. Enjoyed this one- I solved it casually and untimed, but I know it took me longer than the last three.

Got hung up on 12D [Red wine and rice, for two] VINEGARS. I feel like the wording is off in the clue. Red wine and rice are types of VINEGARS, but they are not VINEGARS as the clue leads me to believe. Maybe I’m just overanalyzing that one and I’m cranky because I didn’t get it right away. Also, not really sure the the clue for 39A [What helps you stick to the script?] TELEPROMPTER needs a ? That is quite literally the job of a TELEPROMPTER.

Nice stacks in the corners I’M ON BOARD / CAMERA SHY (clued over-cleverly) / EYELASHES and SCUBA MASK / LAST DANCE / ARE WE COOL? 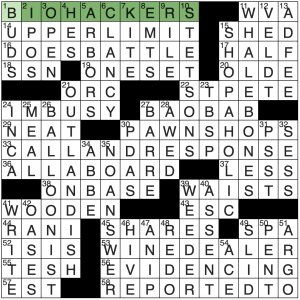 Frequent Stumper constructor Matthew Sewell has this week’s LAT challenge puzzle. In recent weeks, these have taken me a few minutes more than normal to finish. Maybe I am not racing like I should; and I should, because the Boswords actual tournament is coming up quickly (July 25, I believe. Don’t quote me.) Hope you found this puzzle enjoyable, as I did! 4.3 stars today.

Off to do some more puzzles, albeit between graduation parties and other festivities. Enjoy your Saturday! 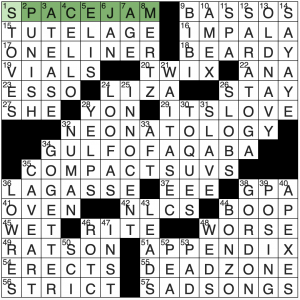 As I have stated before, Stan’s puzzles are usually easier. These last couple have certainly not been! I’ll take a thirteen minute solve, though. This one wasn’t horrible, but I seem like I am not as sharp as I used to be. I’m getting old! We do have  a nice stack of 11s right in the center of the grid, and these will feature prominently in the comments below. I will say this one did seem satisfying to finally solve. I guess that means I did stare at seas of white squares for probably a tad too long! 4.4 stars today. 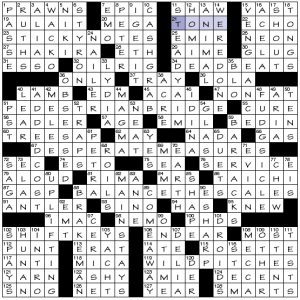 Common phrases reinterpreted as having to do with musical performance and presented with the conceit that they are part of a critic’s rather negative take on it.

Apparently there is no encore, save perhaps 21a [Musical sound] TONE.

DECENT (124a) puzzle, and that 51-across theme answer remains the highlight.