This is Pamela Davis’s debut puzzle for the NYT and it has me hungry for more! I love a wordplay theme. Each entry is a food-based pun. 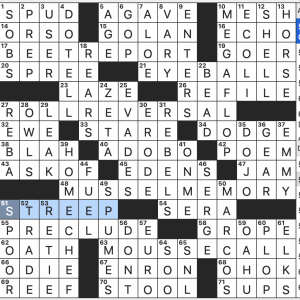 And a bonus entry at 39d [Popular meal kit (or the mother of the food critic featured in this puzzle)] is HOME CHEF. I don’t think it’s a revealer because it doesn’t really explain the theme. It’s a nice little addition, though. This theme made me giggle. It’s Monday-accessible and lots of fun. Take a look at the constructor’s notes on Wordplay for an interesting glimpse into the process.

What I didn’t know before I did this puzzle: that Meryl STREEP has won nine Golden Globe awards. So far. 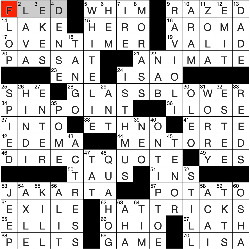 My 2:05 solve time notwithstanding, boy, do I find this puzzle an odd choice for a Monday. Note: This is not a dig on the constructor in the least, as it wasn’t her choice what day of the week this is for. I think Wednesday or even Thursday, with correspondingly tougher cluing, would be more appropriate.

That’s because the theme is not nearly as straightforward as one expects on Monday. Going down to the revealer at 62A [Three-goals-in-one-game hockey scoring feats … or what the ends of 17-, 28-, and 46-Across are when they’re rearranged?], we get HAT TRICKS, and boy is that revealer clue almost a paragraph. I bet it could have been a bit shorter on a later day of the week. In any case: The “trick” is that the second word in each of the theme entries can be anagrammed into a type of hat.

Which is to say: This is a fine, well-executed theme that should have run later in the week. I’m not sure that inexperienced solvers are going to pick up on “rearranged” in the revealer clue meaning “anagrammed,” or that the three hats that the words are anagrammed into are extremely well-known. MITER and TOQUE do appear in fill from time to time, but for a new or Monday-only solver, I think they’re on the tough side.

Favorite fill entry: ARAM Khachaturian at 10D, because I’ve been on a piano concerto listening kick of his lately.

Today’s theme entries are familiar phrases whose outer letters (the “bounds” that the title refers to) spell out a synonym for “law.” 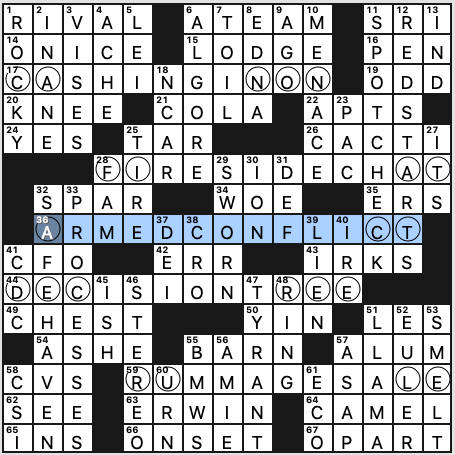 That works, and it’s straightforward enough for a Monday. I wouldn’t call it especially fun or exciting, but it does the job and aids the solver in filling the grid.

Top fill: SPOT CHECKS and SAFE HAVEN. I’ve never heard of REDSTARTS [Colorful warblers], so I checked and double-checked all those crossings. I’m glad to learn it though. You can listen to one here. 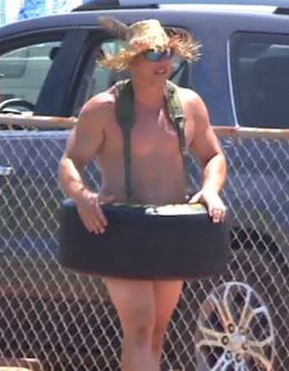 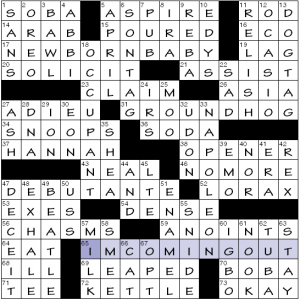 Between the first theme clue, its answer, and the title, I was easily able to deduce the theme, and made a correct guess on what the revealer would be.

Liked this one. Straightforward theme (so to speak), done well, and apropos to the month’s celebration.