This week we’re told, The answer to this week’s contest crossword is an eight-letter word. There are six eight-letter themers, each containing two four-letter words with collectively similar letters: 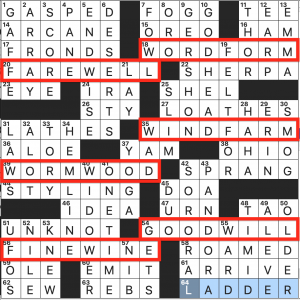 I spotted LADDER (the last horizontal entry) while solving and found the rabbit hole: we’re looking for a word ladder. GOOD ➔ WOOD ➔ WORD ➔ etc., with each connecting entry differing by one letter. I got stuck when I tried to climb the ladder: WILL and WELL are isolated. There are no other L’s in the themers, and a connecting entry must have at least one.

I briefly detoured to other entries, such as the seven-letter entry ENDWISE (thinking it might signal the END of the word ladder), but nothing seemed to connect WELL and WILL. I tried to form the rest of the word ladder, and realized there were two (four-letter) gaps: 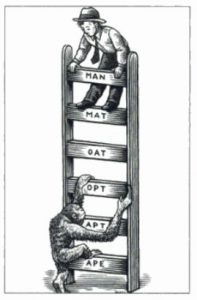 There are two missing links:

The “hotlinks” reveal our meta solution WILDFIRE. Another elegant meta by Patrick Berry, with double the puzzle fun. Word ladders were invented by Lewis Carroll (also famous for creating a certain rabbit that we love to chase down rabbit holes) for Julia and Ethel Arnold. He initially called them word-links, and later called them doublets when they were first published in Vanity Fair. Here’s his first set, published on March 29, 1879:

Solutions (and more of Carroll’s doublets, plus others) are available here. Here’s one more to close us out: Johnny’s Cash’s RING ➔ DING ➔ DINE ➔ DIRE ➔ FIRE, covered by Social Distortion.