Title: “Make It Count”
Prompt: The meta for this puzzle is a musical movement.
Answer: Riot Grrrl 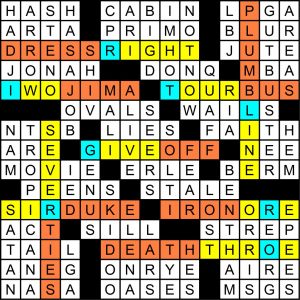 7-for-7 in 2021, baby! Feels good. Found it quickly but only 248 right answers with under an hour before deadline so tricky enough.

Similar mechanism to last month: instead of changing three letters in certain entries to get a music act, you change one letter from a word in each of nine entries to get a number from 1 through 9. Like so:

53-A: [Siderite, say] = IRON ORE. Change the R in ORE to get ONE. I call shenanigans; a music puzzle with IRON ORE as a theme entry is morally obligated to use a “Wreck of the Edmund Fitzgerald” reference.

63-A: [Final movement?] = DEATH THROE. Change the O to an E to get THREE. This is the one that gave it away for me. I’d noticed long ago at THROE is one letter off from THREE, and a singular “throe” is so weird that it tipped me off immediately to the trick.

Now what? Take the replacement letters, of course (as in “The Replacements” from last month), but how to order them? As they are in the grid it’s RITLGRRRO, which was probably R-rich and vowel-poor enough to cause some solvers to look elsewhere. But let’s number them by numerical order of the new single-digit numbers we’re created, and out pops RIOT GRRRL, the 1990s movement that started in the Pacific Northwest.

Another strong effort from Pete in this, his 10th year of MMMM. Constrained choice of answers, so RIOT GRRRL was quite a find, and keeping it symmetrical in the grid quite a challenge. I’ve seen some nice ordering mechanisms before but actually forming the numbers 1-9 in the theme entries and using that as your ordering mechanism is inspired, and — well, quite meta.