This is the sort of puzzle that convinces me I’ll never be a constructor. First you have to notice that the four theme entries all have 15 letters. Then you have to notice that there are country names hidden in all four and that all the countries are on the same continent. That’s how constructors think and not how my brain works. It’s a solid, consistent theme that seems Monday appropriate to me.

The theme answers all have circles; I’ve highlighted those letters. 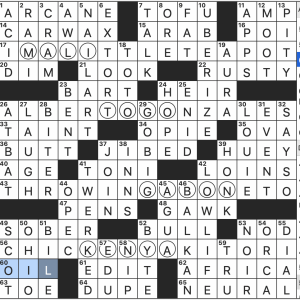 And the revealer: 62a [Where this puzzle’s circled letters can be found] is AFRICA. Plus a bonus at 18d [Band with the 1983 #1 hit “62-Across”]: TOTO. I’m not usually a cross-reference fan but that one amused me. I like this theme not just for the reasons I mentioned above. I also appreciate the fact that the countries all span at least two words. Nicely done.

What I didn’t know before I did this puzzle: I’ve never heard the word UBERIZE although it was obvious from the clue as soon as I had the U. [Transform using mobile technology, as a market]. Yup. 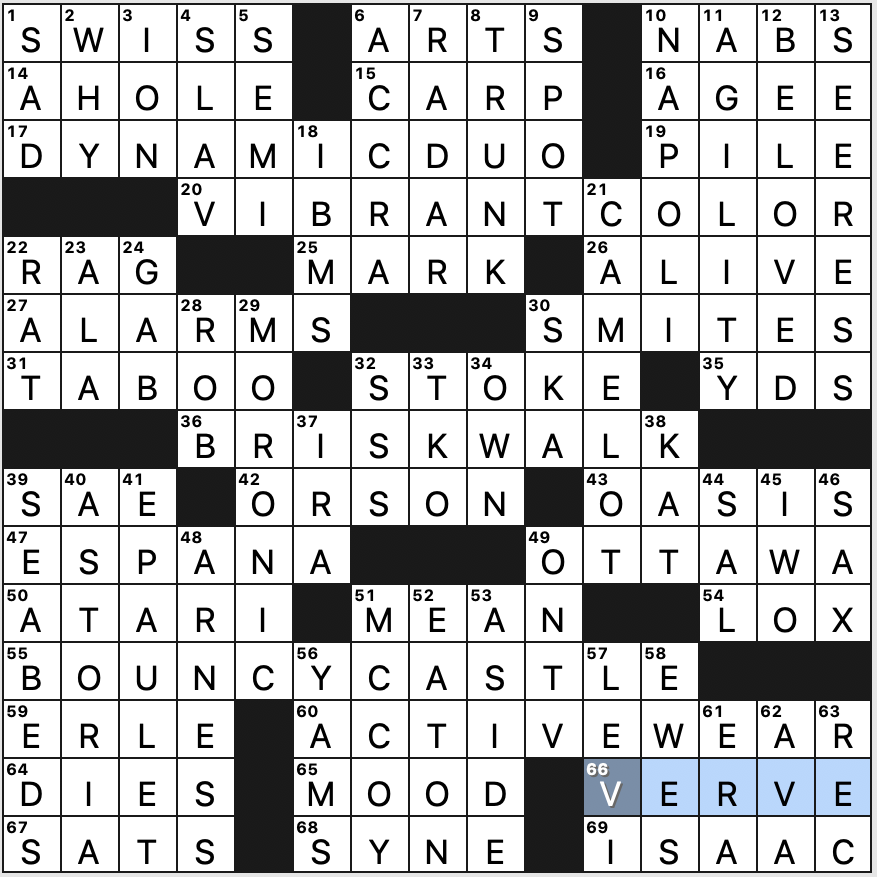 This is well done as far as synonym themes go. My main nit, though, is that the revealer is not some play on words, but just the word being synonymized (feel free to use that). It’s much less elegant this way.

There’s nothing especially long in the non-theme fill, but CAMELOT and MORONIC are fun. I also like BELOVED, NAPOLI, and ASTORIA, Oregon, since I’m in Ashland, Oregon, at the moment, road-tripping from the Puget Sound to the Bay Area.

Did not know EATON [Fine stationery brand], and there sure are a lot of dudes in the grid: James AGEE, ORSON Welles, ERLE Stanley Gardner, ISAAC Stern, IRA Gershwin, SAL Mineo, James ARNESS, and LEVI Strauss compared to solitary AVA Gardner. And wow, all of them are pretty old-timey crosswordese. Nothing new here. A missed opportunity is KAT which could’ve been clued as [Actress Dennings] instead of old-timey comics character Krazy KAT.

I would’ve liked a better revealer with this theme or a title that could do the same job (“Energetic Starts”, perhaps?). Not every grid is going to have room for long non-theme fill, but some fresher cluing would have been welcome. 3.25 stars. 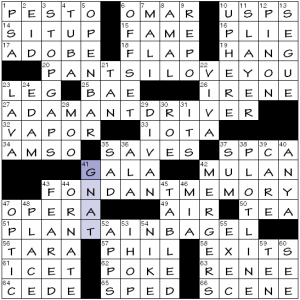 Not to pry, but do you have ants in your pantry?

That’s essentially the suggestion of the title, but to be vigilant in parsing said title, there really isn’t much of a connection to kitchens aside from the stereotype of ANTs ‘invading’ there: not in the answer nor the clues. 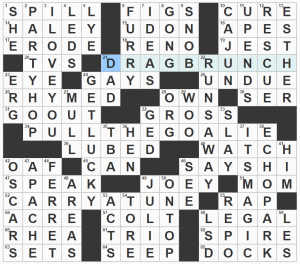 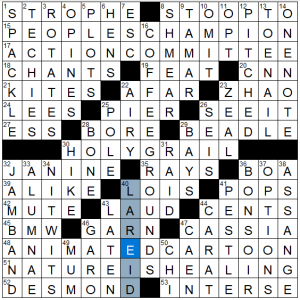 An aesthetically pleasing grid from BEQ this morning, with open corners, multiple 15s in both the top and bottom halves, and center stairstacks with a long down holding it all together. I was really on Brendan’s wavelength through the top before getting tripped up in two separate areas in the bottom.

I’m a bit of a sucker for 15s: PEOPLESCHAMPION and ACTIONCOMMITTEE set a flavorful tone at the top, and it’s no surprise to see NATUREISHEALING pulled right out of my Twitter feed and into a BEQ grid. The absolute highlight for me, though, was COFFEEGROUNDS connecting the entire dang puzzle together, and with a clue (16d – [Hot stuff in a composter]) that made me work to get there, too.

Other clues and answers of note: 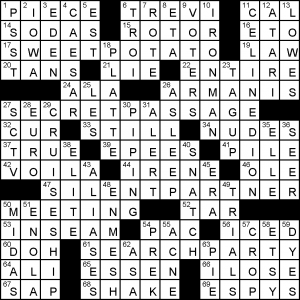 Stella is unable to be here today so I am babysitting you. The Monday puzzle today is by George Jasper, and features a very broad theme: ESPYS. Each of four entries have the initials S&P; SWEETPOTATO, SECRETPASSAGE, SILENTPARTNER and SEARCHPARTY. I was a little puzzled as to why Hogwarts was singled out for SECRETPASSAGEs, but otherwise the theme went over easily. 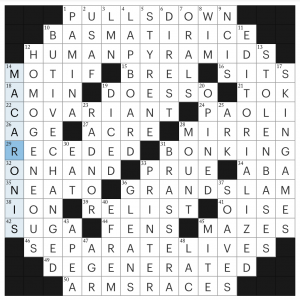 I found that a considerable portion of the pop culture entries pulled from the previous millennium, with Steffi Graff’s GRAND SLAM at 36a, SEPARATE LIVES (the Phil Collins and Marilyn Martin song) at 46a, and Rickey Henderson’s record for STOLEN BASES at 13d. While these are fantastic entries, the references went completely over my head. At least SUGA [Stage name of BTS’s Min Yoon-gi] made an appearance at 42a!

12a. [Living monuments?] –– A fantastic clue for an equally fantastic answer, HUMAN PYRAMIDS. Anyone else remember the elementary clamor to be the one on top? Absolutely splendid, and kicked off the puzzle quite nicely.

29a. [Withdrew] –– Tripped me up with its near-identical cousin, SECEDED, which remained in my grid for about 10 minutes after I had completely filled it and stunted my final time. Changing the ’S’ to an ‘R’ to make RECEDED prompted a feeling any solver knows well––a mix of utter frustration and considerable relief. Well-played, Ms. Gorski.

31a. [Clobbering, slapstick-style] –– BONKING is a delightfully goofy word, one that has recently seeped into my vocabulary, and, much to my friends’ dismay, is frequently accompanied by an impromptu demonstration. Consider this my formal apology for any distress incurred or injury caused.

4d. [Portable writing surface] –– I can get behind LAP DESK, but are we really sure that LAB BOARD is in-the-language, or, for that matter, a term at all? Even when I google it, the only hits redirect to LAP DESK products.

14d. [Ultra-fashionable and oft-mocked aristocrats of the eighteenth century] –– You learn something new every day! While MACARONIS may nowadays appear more often in your kitchen cabinet than your neighborhood cafe, I got a laugh out of the Google image results for the fashion. (Speaking of macaroni… If anyone is on the market for a late night dorm room snack, I highly recommend Annie’s Microwavable Mac & Cheese Cups.)

33d. [One for the books?] –– I didn’t quite understand this clue; the best I could come up with was that a PRINTER (as in a person who prints) prints books? A bit iffy, unless I’m missing something.

37d. [Wines often paired with scallops or risotto] –– My first instinct here was WHITES, but the puzzle called for the more precise SOAVES. I need to take a wine tasting class.