Oh, goody, a quip puzzle. And by “goody” I mean “aargh.” I do not like quip puzzles, quote puzzles, riddle puzzles, or any of their relatives. I especially don’t like them when the quip seems to be fabricated for the occasion and is not amusing.

We have four sections of the quip: 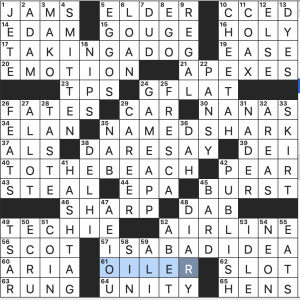 I presume the funny part is the image of someone calling “Shark! Shark!” and causing a panic on the beach. Mind you I can’t remember the last time I went to a beach that allowed dogs to run loose while there were people swimming, and “Shark” is not a classic dog’s name, and panic is not funny. This theme isn’t funny, either.

What I didn’t know before I did this puzzle: I got nothing. 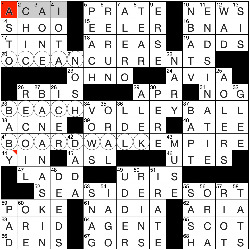 Normally when a LAT Monday takes me above 2:20, you’re gonna hear me say it was possibly more appropriate for a Tuesday or Wednesday. Not this time; I blame my keyboard. I’m working on an awkwardly teeny Bluetooth one while I wait for a replacement for my previous keyboard, which inexplicably decided to add a letter N every time I typed M and vice versa, to arrive. #speedsolvelife

To the puzzle! Another thing I often say is “I would’ve traded this revealer for another theme entry.” Not this time at all! Let’s look at the theme entries first, which are two-word phrases with the first word in each phrase in circled squares:

As I was solving, I thought, “Why on earth do you need circled squares?” Usually they’re used to point out hidden words crossing two words in a phrase, or hidden within one word, that solvers might otherwise not notice. I also thought, okay, OCEAN, BEACH, and BOARDWALK — these are things associated with each other, but they’re not all the same type of thing, so this doesn’t seem like the tightest theme.

But. BUT! Then there’s that revealer at 52A [Coastal vacation center, major elements of which are placed as they might look on a picture postcard], which is SEASIDE RESORT.

And then it all falls together and is awesome. Because if you were to have a look at a postcard, first you see the OCEAN going off into the horizon at the top of the image. And then you see the BEACH in the middle. And at the bottom is the BOARDWALK. If you didn’t have those circled squares or that extra-long revealer clue, you might not notice the care taken with the placement of the theme entries. So, bravo, Paul Coulter; I salute you.

Quibble: Does anybody really say BANANA SKIN? Google gives me 635K hits for that and 4.4 million for the way more common BANANA PEEL.

ALEK Wek is perhaps a little fashion inside baseball for a Monday, but I’m still delighted to see her name!

I was expecting a revealer for this one, but it never came. That’s when I realized I should have looked at the title. The circled letters on the outer edges of each familiar phrase spell words that can follow “inside.” Hence the title “Inside Out.” 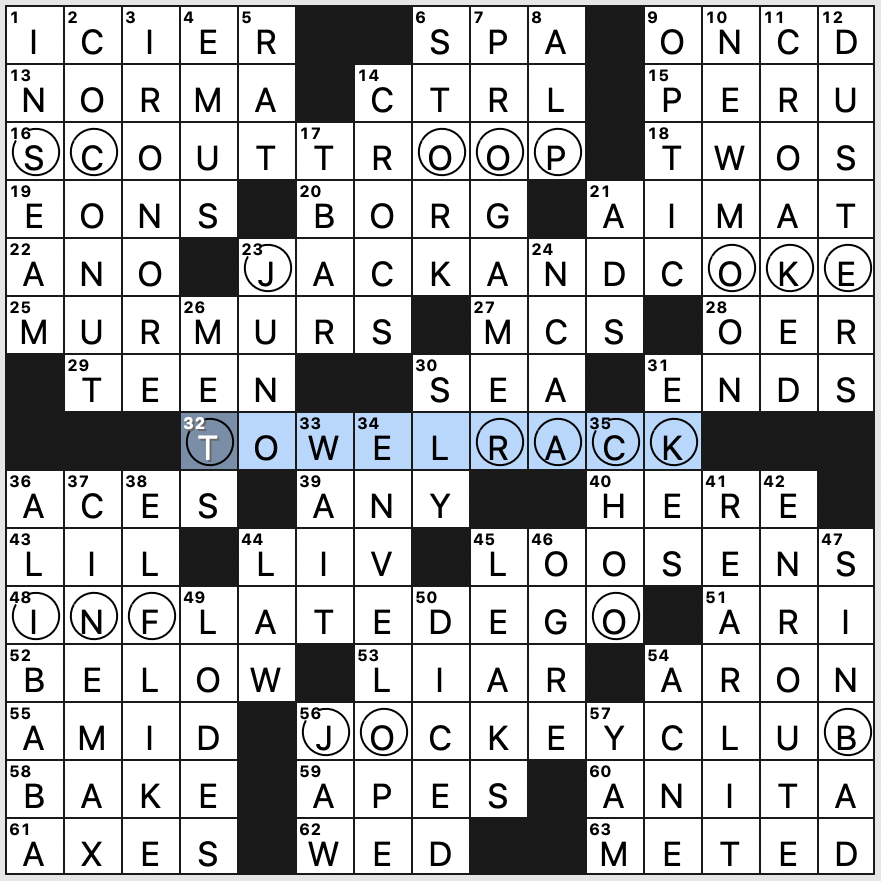 I thought this was unexpected and cute. Don’t think I’ve seen a theme quite like this, so it provided a nice little aha moment.

Likes in the fill: COCONUT, NEW MOON, CROAKED & MURMURS, CINEMAX, ELF-LIKE, and the Arabian duo of ALI BABA and SINBAD.

Not sure that I’ve ever heard the term PRO GAMER, but it seems legit. Once, we stumbled upon an esports tournament in Seattle and it was packed full of fans watching the happenings on large outdoor screens. It was quite an event. 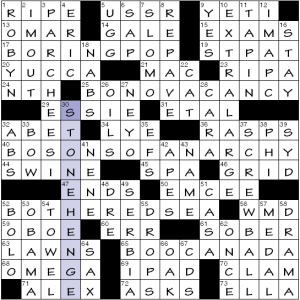 Risky title when it comes to a critical assessment, but fortunately (or unfortunately) it refers to the theme—body odor, with a BO prefixed to phrases for amusing effect—in a literal manner.

I liked the crossword well enough, despite that title. Having the predictable BO- at the beginning of each long across answer helped boost my solving efficiency.

Perhaps this will make you happy:

Cheer up; I could have posted the doomy Lou Reed version. 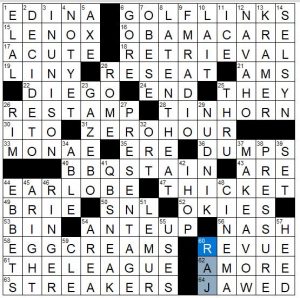 Fun grid design from BEQ today, with stacks in two relatively open corners, and lots of spots to move around the grid. I was glad for the latter in particular, because there was plenty that tripped me up.

I thought I’d be off to a hot start after EDINA (1a – [Suburb of Minneapolis]), ELAL (1d – [Carrier that had its one millionth passenger during its bar mitzvah year]), and GOLF-something (6a – [Driver’s destinations]) all came quickly. But that’s as far as I got before confronting LINY (19a – [Ruled]), which looks pretty awkward to my eyes, new-to-me SELSYN (14d – [Motor-current system]), and eventually piecing together GOLFLINKS for the rest of 6a. There are links courses and “links” can be used as a metonym for golf or a golf course, but GOLF LINKS feels awkward to me.

Working through the grid, I got a chuckle out of BBQSTAIN (40a. – [Sloppy rib eater’s giveaway]) and enjoyed NUDNIK (29d. – [Bothersome person]), but overall this didn’t feel as current as my favorite BEQ puzzles – I struggled more to piece together PRESENTAGE (27d – [Modern Days]) and get into the bottom sections.

Theme: Each of the theme answers contains the word GATE. It’s a nice touch that they’re split in three different ways, although I don’t think that USA Today requires that for these hidden word themes. 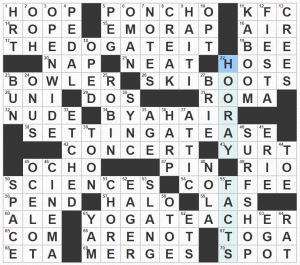 Hey besties, I liked the bullet points I used on Friday, so maybe those will be here to stay. We’ll see how things shake out!

Things that made me say Hmmm: 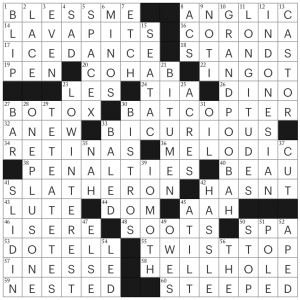 This was a fun puzzle––relatively clean and a lot of fun answers. I was a bit sluggish today. I’m not sure if that was the cluing or the entries, but something just didn’t click for me. Ah, well. Overall, I liked it!

16a. [Ring of light] –– Respectable, but intentionally and glaringly evasive cluing choice for the very much in-the-language CORONA. I understand beating around the bush so as to avoid negative connotations, but for something with so current an association as CORONA, it feels as though the constructor is ignoring the elephant in the room.

20a. [Roomie, quaintly] is COHAB –– quaint indeed. I’ve never heard this abbreviation of cohabitant (cohabitee? cohabitator?) before, and it comes up in Merriam-Webster as “one living in illegal cohabitation, especially: a polygamous Mormon.”

27a. [Stiffen the upper lip, say] –– What a clue for BOTOX! A deliciously constructed misdirect, with a satisfying alternate meaning. Very nicely done.

30a. [Wayne Aerospace craft] –– Alongside many other bat mobiles, the BATCOPTER emerges. I’d like to think Bruce Wayne is slightly less dystopian a billionaire (or, rather, former billionaire) than a certain someone of SPACE X fame.

36a. [Dulcet] –– Good vocabulary refresh with this clue for MELODIC. Though I struggled with it for a bit, a tricky clue is to be expected on a Monday here.

28d. [Elementary sum] and 29d. [Chats] –– Kind of fun to have ONE PLUS ONE and TETE A TETES right next to each other, due to the doubling in both entries.

41d. [Arrived inconspicuously] –– Tame clue for SLID IN, but a fun entry nonetheless.

Shoutout to LAVA PITS, BICURIOUS, and HELLHOLE. I don’t have anything to say about these other than that I love the entries. Super well done!