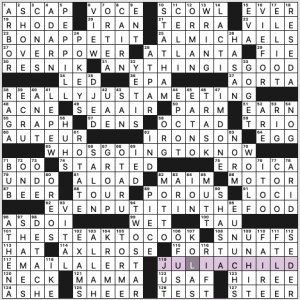 Oh! A missed opportunity to run this puzzle four weeks from now, on the occasion of Julia Child’s birthday on August 15. And yes, I knew her birthday. Why? Because it’s mine, too! The theme is basically “fill in the blanks with punch lines of some funny things Julia Child said”:

I’m late getting to the puzzle because this weekend is Pokémon Go’s GO Fest, so I’m gonna dispense with the usual. Overall the fill was fine, and the theme was funny—I read the themers aloud to my husband and he laughed at least twice. I learned something new about a celebrity: 10d. [Actor Jason who was once on Britain’s national diving team], STATHAM. Overall gestalt vibe, 3.75 stars. Happy weekend to you all!

Theme: Each of the themed clues ended (finished) with a word or phrase indicating meaning that they weren’t moving very quickly (slow). 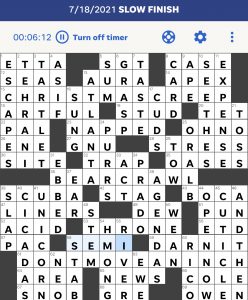 It was a solid theme. I felt like DON’T MOVE AN INCH picks up any slack if the solver is having trouble with the first two themed clues. “Slow Finish” immediately sent out “Tortoise and Hare” vibes and so I was almost surprised not to see the two Aesop characters referenced in the puzzle.

Grid-wise, I liked the three-letter across and seven-letter down combos in the top left and bottom right corners of the puzzle. As always, I spend the most time when more than one name clue is started together, so 66a [“Singer Paula or Natalie”] and 69a [“Singer actress Rena”] were tough, but eventually both COLE and OWEN respectively were filled in by the down clues.

My favorite section of the puzzle was the bottom left corner. It was a nice balance of answer length and clue content. For example, 40d [“Noisy insects”] and 41d [“Mythical creature with a horn”] made CICADAS and UNICORN the central down answers. I did this one on the app this morning, and I saw these clues before it was time to switch to the down answers (and still waited excitedly to fill them until I made it through all of the down clues, per my usual routine). I kicked myself for not getting 57a [“Ms. ___-Man”] because what kind of nerd am I that Mrs. PAC-Man didn’t occur to me? However, I never would’ve guessed 47a’s LINERS but appreciate the creative cluing in “Large passenger ships” that required me to stretch my imagination a bit.

Other fun clues for this Sunday included:

Overall, I thought that this was a fun solve. There was a lot of crosswordese spread throughout with EWE, GRE, ETD, and the directional 26a [“Direction opposite WSW”] (ENE) that often felt like it sped up my solve time as if the puzzle itself was rushing me to finish. However, there were a lot of great educational clues that extended my time spent after the puzzle looking up some of the references made even in passing.

Step right up to this week’s WaPo puzzle!

THEME: Words that can precede STEP are presented literally within common words/phrases.
You 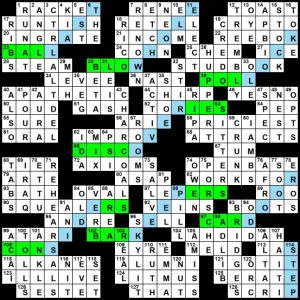 This is very well done. Not that that is a surprise. But, while this might not look difficult to execute, it is a grid with many constraints. Anytime the theme is dependent on letters being placed in a pattern outside of a traditional horizontal/vertical entry, say in a circle or- in this case- on a diagonal, things get dicey. Still, Evan manages 144 words and mostly crud-free fill in this top/bottom symmetry grid.

I thought I had fully grokked the theme as I solved top to bottom after uncovering the first three themers, and thought it was cool that the clues were all twofers in a sense. Clues like that also come with a synergy that can help to get the solver out of jams. When I got to the fourth themer (DISCOVERIES), I balked for a moment before realizing that some of the “staircases” come to a landing where the rest of the entry resides (the –IES in DISCOVERIES). 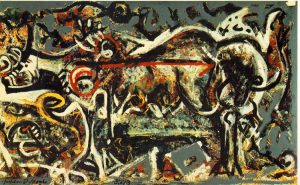 The fill was much more difficult for me to get through than normal. I have a feeling Evan wasn’t keen on having to cross HUPPERT with POLLOCK, and carefully SIDESTEPPED a Natick by offering an anagram-letters-in-two-other-clues nudge. I used that nudge. For some reason, I didn’t get POLLOCK because I sorta-kinda misread the clue and thought I was looking for a female artist. Nope. The she-wolf is by a he-man. And a STUDBOOK is a record of horses. Get yer mind outta the gutter.

RUNTISH, ALKANES and TREMBLY were among others that were trouble for me. Not a helluva lot of flashiness in the fill, but as I noted earlier, this theme-type is very difficult to execute with squeaky clean fill.

The theme is an excellent payoff though. Well worth any fill “sacrifices.” And, it should be noted that the first parts of each of the themers that appear independent in the grid are perfectly acceptable as crossword fill, even though they go completely unclued. BALL, BLOW, POLL, DISCO, CARD, BARK, CONS. Expected of Evan, but still mind-blowingly impressive.

This is really quite the feat of construction. And enjoyable to solve at that.

This is a cute theme that makes the puzzle much easier. Each theme answer is a two word phrase or compound word that is reversed, so once you get one half, you can fill the whole thing in. 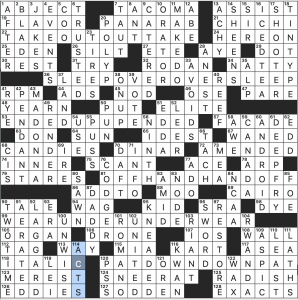 S0lid, consistent, accessible Sunday theme. I like a little more chewiness in my puzzles, but that’s just me.

What I didn’t know before I did this puzzle: that CAIRO is on the 30th parallel.

THEME: Names of notable women are homophones for the first words of common phrases. 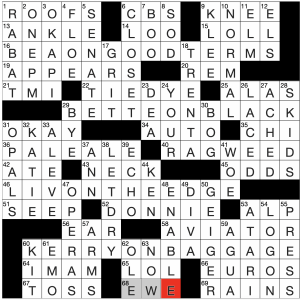 I hadn’t noticed that they all follow the (Name) ON ______ formula and that they are all clued as discussions until now, which is a very crucial part of the theme and makes it much more tight and interesting than I had originally taken it for. It also clears up my misunderstanding of the title.

New (I think?) for me is the phrase BET ON BLACK. It definitely a thing- looks like it’s more common with the word ALWAYS before it.

Very standard fill here. The lack of longer entries didn’t add much excitement. Been a while since I’ve seen KLEE!

Theme: Familiar phrases are re-imagined as advice for appropriate professionals. 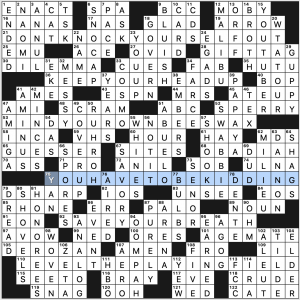 Despite my few nits, I enjoyed these quite a bit. Sure, there’s some duping with the “you”s and “your”s, but entertainment factor outweighs strict adherence to rules in my book, and that’s the case here. I would have gone with a different title, however. “Pro Tips” seems like it would have been perfect for this. Oh, except that PRO is in the grid at 71a.

Fill-wise, I’m not seeing much along the lines of long sparkly entries, but everything is solid. YOUTUBER dupes (yet again) the “you”s in the theme, but I can live with it. Elsewhere, I like OBADIAH, COVER-UP (the article of clothing, not the scandal-avoidance technique), and SWABBIE.

DEROZAN [Four-time NBA All-Star DeMar] is new to me, AGE-MATE [Peer in school] sounds a little weird, and S-HOOKS [Pots may hang from them] looks bizarre without the hyphen. Oh, and I just spotted another “you”: YOU UP is at 23d. I’d say that’s one “you” too far.