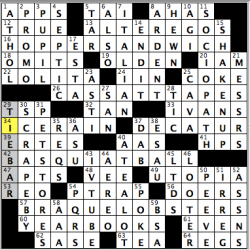 Good day, everyone! Hope all of you are well to start a new week of crosswords!

As the country continues to reopen, I’m sure there are a number of people who cannot wait to once again visit their favorite art museums as part of their ventures outside. (Please be smart and think of the safety of your fellow citizens as you proceed outside, thank you!) Here is guessing that you won’t see these works of art, mentioned in the theme answers in today’s grid, hanging on the walls! Phrases/nouns are turned into puns when one of the words in the phrase is replaced with a similar-sounding word that happens to be the name of a famous painter.

Haven’t seen American Psycho (notoriously not a movie-theater goer for a long while now), but totally remember my college friends freshman year talk about the SOCIOPATH in the movie that gave them the creeps when they watched (11D: [Christian Bale portrayed one in “American Psycho]). The neighboring long entry in that area, SHAKEN UP, was more fun fill that made that area of the grid probably the most pleasant area to solve…even if one of the entries was “sociopath” (15D: [Stunned]). Can’t say that I have done what was mentioned in the clue for ATE A LOT, but I was close to entering the Suicide Six Wings Challenge at Buffalo Cantina in Brooklyn years ago when I, a chicken wing lover, went there with a couple of friends who thought it would be a good idea for me to have my tongue fall off in front of them while attempting it (40D: [Devoured a 12-course meal]). What would I have been up against if I tried it? Well, here you go…

“Sports will make you smarter” moment of the day: TAI (5A: [___-chi]) – One of the great figure skaters in American history, Tai Babilonia was best known as one half of the pairs duo that took home first place at the U.S. Figure Skating Championships five years in a row between 1976 and 1980. Not only did she and partner Randy Gardner dominate American pairs figure skating at that time, they won the gold at the 1979 World Figure Skating Championships in Vienna. Their win in ’79 broke a streak of 14 consecutive years in which a Soviet pair won the gold at the Worlds! 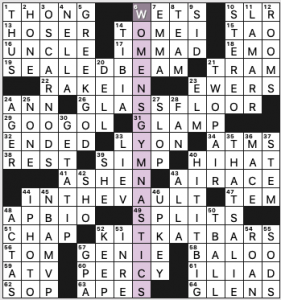 A timely theme, with the Olympics purportedly getting started this Friday. (The opening ceremony’s “parade of nations” is my favorite part, but this time many of the athletes won’t have arrived yet and the stadium won’t be full of fans. Weird.) WOMEN’S GYMNASTICS is the name of the game, 6d. [Olympic sport whose all-around competition is composed of the last parts of 19-, 26-, 44- and 52-Across]. That’s a 16-letter phrase, so the puzzle is a bit taller than usual. Here are the phrases ending with gymnastic events:

With four 10-letter themers intersecting a fifth 16-letter themer, much of the grid gets constrained. The fill suffers a bit—not keen on I’M MAD, EWERS, GLENS, AGER, IPHOTO, GET A TIP, IN RE, UP KEY (I’d call it either the “page up” key or the up arrow), and ROANS. In the plus column, I quite like OSCAR NODS, GREEK GOD, HIT IT BIG, and Hedy LAMARR (thank her if you like Bluetooth).

Theme: The letters OIL are spreading apart as we encounter each theme entry. The revealer is SLICKS (46d, [Some spills that may spread…like this puzzle’s indicated letters]). 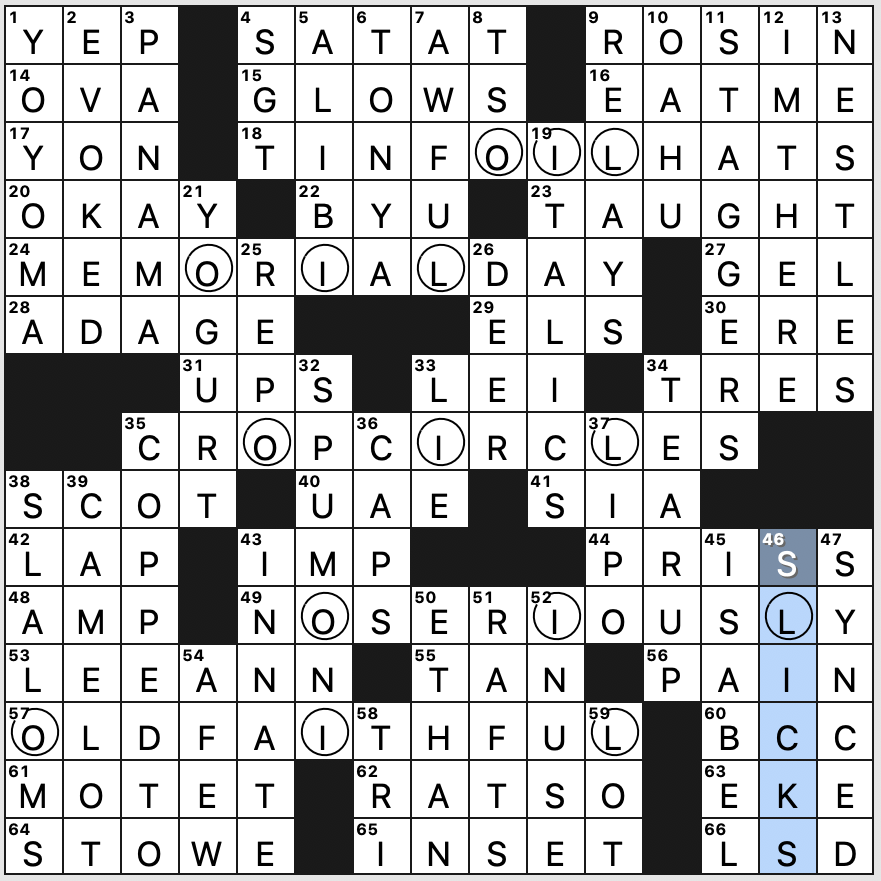 While no one wants to envision the damage done by an oil slick, you have to admit this is a fantastic set of fun entries for any theme. The fact that they meet a specific set of criteria (OIL spreading) makes it even more slick (pun intended). To have such fun entries fulfill a theme seems like a rare treat to me. Nice finds.

Excellent puzzle today! Lots of fun and some tricky misdirection, including surprisingly with the threes, leaving the crosses to determine many of the answers for me today. Still one of my fastest times though, which is always exciting. Great start to my morning! 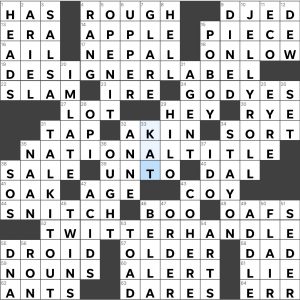 Theme: something known by or for someone else’s name

With today’s theme and the title, at first I wanted to put in actual names and was trying to figure out how to get “Coco Chanel” into the first themers. The misdirection had begun! As I moved through the grid, most of the fill came easily, though I typed in several answers that weren’t correct. Being newish still, I enjoy regular mode which immediately shows if a letter is incorrect. I find this helpful (and don’t consider it cheating), as it teaches me with instant feedback if my instinct or thought-process is right for a particular clue. As the grid filled in, the themers became clear, and as DESIGNERLABEL became apparent, the theme crystalized for me as well. I most enjoyed the third one, TWITTERHANDLE, while NATIONALTITLE was not as punchy of a reveal as I hoped. People’s names are certainly represented by a label or handle but I’m not sure that a sport title works the same in that regard–though that could be my lack of topical knowledge, as sports is a weaker area of mine. Still a fun puzzle and looking again at the title, there’s more hinted in it by using “your name” instead of “my name” and perhaps it was more obvious to other solvers.

As for the other misdirection, I loved coming across it, though my grid stayed more empty for longer than usual as I figured out what was really meant for certain clues: AIL instead of “ill”, LOT when I wanted to put in “bid”, OAK for what I thought was “nut”, RYE though “rum” came to mind first though. ALERT was fantastic, as I thinking of “dings” or “buzz” or similar. None of these felt like gotchas or obtuse, it was just a different take which made it so much fun, especially as I stumbled on more throughout the puzzle. It also made the threes more enjoyable. The classic example fill for me is “tsar/czar” as either could fit a clue but the crossings are needed to decide what is correct.

One of my faves this week, KAT, reminds me of Japan and discovering the delicious delight of green tea Kit Kats. At a premium in the US, they are totally worth a splurge, now and again, if you happen to find them. Not too sweet or too bitter (from the matcha power) and a fantastic shade of green, they are an indulgence easily overdone and best shared with others as they often come in a bag of individually wrapped two pieces (minis) though I think they do make full bars too. Japan has a Kit Kat flavor craze in which many uncommon flavors are available, though the only other one I’d try if I had the chance is the powder pink sakura cherry blossom one. Yum! 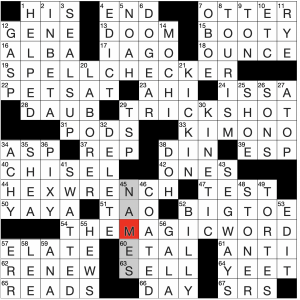 Very cute, tight, and fun offering from Carly Schuna today with good fill (often clued quirkily). I mean, YEET! for the win. Maybe it’s a tad dated (like “lit”- which I don’t believe is a thing anymore), but I’ve heard plenty of YEETs in my classroom.

MOCHI (happy to learn it!) and forgot ANA de Armas. 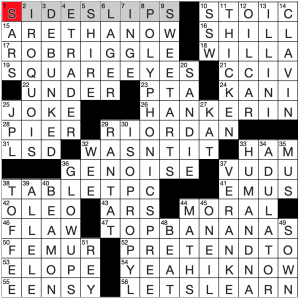 Sorry for the late post; I picked up my new road bike today and I have been a tad busy!

How do you all like the new Across Lite for Mac? I am still messing with it; this screen image is from the new update.

We have a themeless for this week’s Jonesin’, which means lots of candidates for the Obscure-Pop-Culture-Reference-of-the-Week. There are some things in here I had no idea that they existed, while there is also a lot of fun stuff in here. I forgot to start the timer, so I didn’t really rush at all. No idea what my time would have been, but it was slightly longer than usual since there were a few things I didn’t know! Still a solid 4.4 stars. 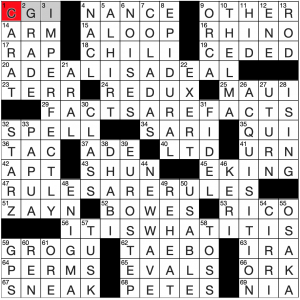 We have another byline I am not necessarily familiar with, but that is on me, since the name is in the database! Nice theme in this one:

I love it. I say this thematic phrase A LOT.