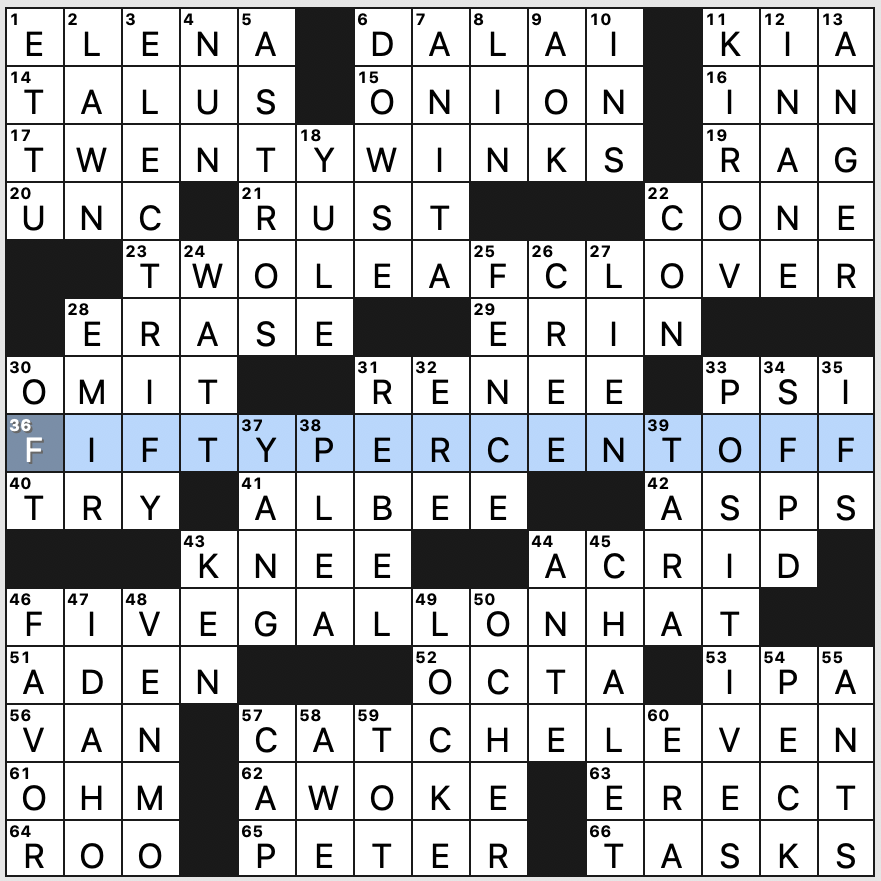 I’m pretty sure I’ve seen a similar theme at some point or at least similar jokes in various forms (a FIVE-GALLON HAT sounds like something from a Looney Tunes cartoon).  But the last one was a new one on me, and I welcomed it. As a puzzle theme it works well enough though I think it might have been better placed earlier in the week.

In the fill, ELECTRIFY isn’t quite electrifying, but it’s nicely sparkly. POSITIVES isn’t quite sparkly, but it falls on the positive side. There isn’t anything overtly negative to gripe about. 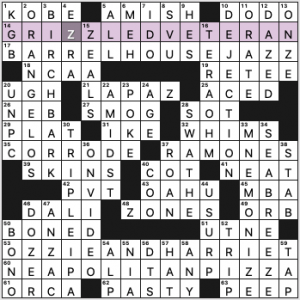 The theme is that there’s a blocky letter Z made out of black squares in the center of the grid, there are four 15s that include a ZZ, and the internal angles of the big black Z are unchecked squares containing Z. Here are those grid-spanners:

I like the letter Z, grew up with that as part of my initials. But the payoff here is slight, since the grid’s jam-packed with too much compromise. RETEE, NEB, UTNE, ORANGELOS (never heard of this either), ALP, ROAN, TERAOHM (!!), and MNEMONIZE (?!)? Most of these should have no place in a Wednesday puzzle, and heck, I wouldn’t even like them in a Saturday puzzle.

Fave fill: The RAMONES (had a nurse Monday morning named Sheena, and you will admire my restraint—I did not ask if she was a punk rocker, nor if her baby takes the morning train), BIRCHBARK canoe, DEJECTION (see also: the Phoenix Suns and their fans Tuesday night), and SEA BREEZE.

2.5 stars from me. The gimmick didn’t have the payoff I’d have liked. 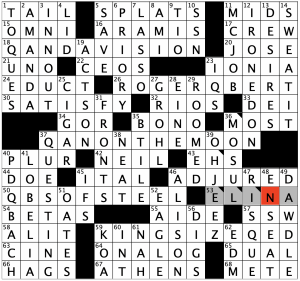 There’s just something right in the universe when BEQ has a puzzle that’s all about replacing a letter in common phrases with a Q:

that’s WANDAVISION, ROGER EBERT, MAN ON THE MOON, ABS OF STEEL, and KING-SIZED BED, each given a Q-tip.

The Online Crossword Reviewers Board of America asks members that if a theme revolve around the letter Q that we also post Stacy Q’s “Two of Hearts” in the post.  Enjoy!

There were a few places in the grid where my expectations didn’t match the fill.  I always think of it as “Cor blimey!”, but it can also be “GOR, blimey” (34A, “Word that can proceed “blimey!””) when expressing surprise British-ly.  Elsewhere, “unconfident utterances” (43A) wasn’t um, uh, or er, but EH, which I suppose works as well. 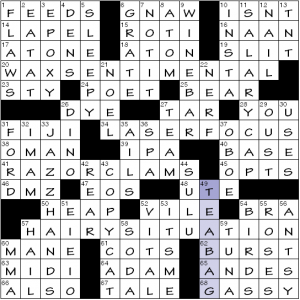 After seeing the first long across entries, I glanced at the title to confirm I’d correctly inferred the theme. This made the third one even easier, and I had a weak suspicion about the fourth.

All very depilatory. Some of these procedures could take place at a SPA, which is located in the central spot (36d) with the clue [Self-care destination]; I choose to believe this is an intentionally theme-adjacent entry.

Oh, and as a loose end, that threading idea is echoed (for me at least) at 49d [Leaves hanging by a thread?] TEA BAG, which is an excellent clue.

Theme: “Get Your Money Right – The last word in each theme answer is a synonym for money. 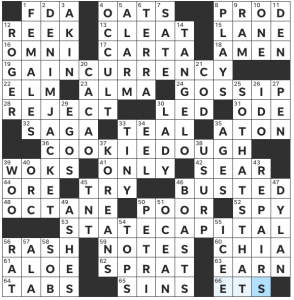 A classic USA Today theme today in which the title is very helpful – each “money” word is literally on the “right” side of the theme answer. COOKIE DOUGH ice cream is one of my favorite flavors, so I’m happy to see that make an appearance. I also appreciated the international clue on STATE CAPITAL – Tepic is the capital of the state of Nayarit in Mexico. I always assumed that the phrase GAIN CURRENCY itself related to money in that “currency” equates to value, so the idea discussed is gaining worth/capital in society. But from some post-solve googling, it looks like the phrase actually refers to “becoming more current”. Who knew?

Maybe it’s because today was my first time using the new USA Today web solving interface, but the puzzle played harder than usual for me. Right off the bat, it took me forever to get FEMALES [1D: Ewes, for example] – I had the F and kept wanting some version of “farm animals”. Similarly, I needed a lot of crosses to see SO THAT’S THAT [25D: Phrase of finality], although once I got the answer I really enjoyed it. Because the puzzle has only three theme answers,  they’re able to be placed pretty far away from each other, which gives more flexibility in fill. In this puzzle, that comes in the form of the larger NW and SE corners, which you don’t often see in USA Today. 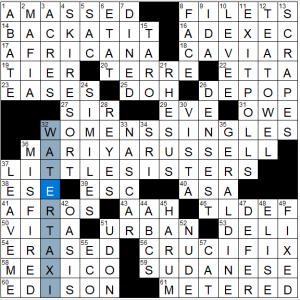 Smooth solve for me on Erik’s puzzle today; lots of good stuff that I got a chance to learn and go down some post-solve internet rabbit holes.

The marquee answer, MARIYA RUSSELL (36a – [First Black woman awarded a Michelin star]) was plenty gettable from crosses, and even if it wasn’t, I’m glad to learn her name. She’s currently taking a break from running a kitchen, having left her Chicago restaurant in Summer 2020, but I hope I can get to her next venture, whenever and wherever it is. And speaking of folks who admirably manage self care in high-pressure jobs, the other entries in the middle stairstack; WOMENSSINGLES and LITTLE SISTERS, are elegantly both clued to tennis stars Naomi Osaka and Serena Williams. 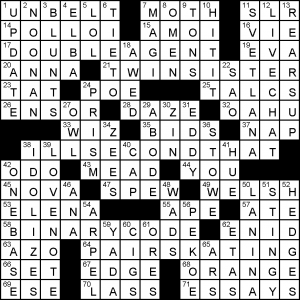 Quite a “list-y” theme today by Daniel Raymon. It does have a punchy central title answer: ILLSECONDTHAT. The other four entries are all things associated with duality: a DOUBLEAGENT, a TWINSISTER, BINARYCODE and PAIRSKATING (with an Olympic clue, but that’s a winter event).