This week’s AVCX is a meta puzzle from Francis Heaney, with a contest running until Sunday. We’ll have a writeup posted after submissions for that have closed.

The revealer is OLYMPIC / RINGS (39d, [With 51-Down, where to find parts of the starred answers interlocking, as suggested by their positions in the grid]). I’m not sure about the wording of that clue, but the upshot is that the colors of the rings are strategically placed in the grid at the appropriate locations. 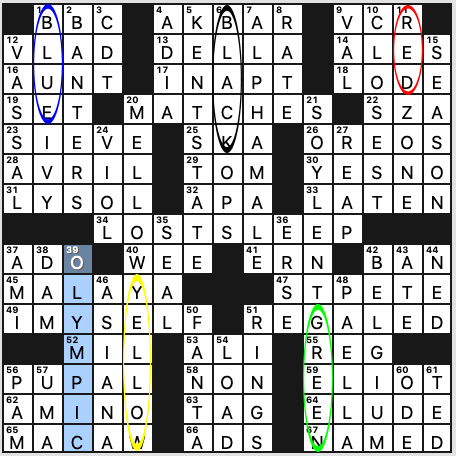 Again, I was thrown off by that revealer clue which I feel is confusing. I was expecting the colors to interlock in the grid, but they don’t. (Not that I know what that would mean.) A better clue might have been [International icon whose colors are found at the appropriate location in the grid] or some such. I might have liked it better if all the colors were toward the center of the grid where they might at least have some overlap (as in my hastily doctored-up image, below-left). 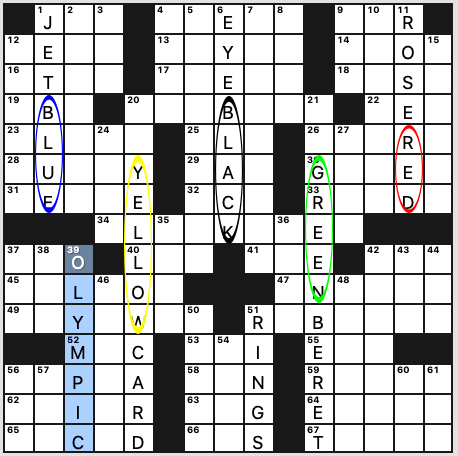 Further, the differing word lengths of the colors makes any attempt to draw the rings look distorted. Trying to represent rings with a vertical word seems like an odd choice. And the lack of symmetry—including with the revealer—isn’t in keeping with the symbol being represented.

But I do like the fun theme entries. There’s something humorous about MELLOW YELLOW paired up with sinister SOYLENT GREEN.

The left/right symmetry of the theme causes some challenges in the fill. The center section requires additional long fill entries stacked next to a theme answer. Those are solid (KENT STATE and ALPHA MALE), and the crossings aren’t terrible, but AKBAR (16th-century Mogul emperor) and APA (Actor KJ of Riverdale) were a challenge. And if you have to have ADIA (Sara McLachlan song) in your grid, that’s a red flag for me. I mean, I own the song (somewhere on a CD), but it no longer has any crossword currency. Elsewhere, the crosswordese crossing of ERSE and ERN stands out.

But I also like LOST SLEEP, ST PETE, and I MYSELF.

Mixed feelings on this one, but it certainly is well-constructed. I’m just not sure I agree with the choices made in the execution of the theme. 3.5 stars. 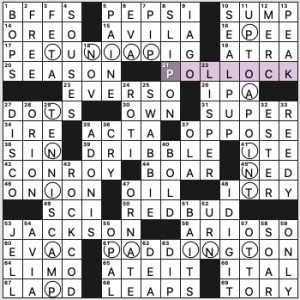 The name of the game is 53a/21a, JACKSON / POLLOCK. I don’t think I’ve encountered the word DRIBBLE (39a. [Make art like 53-/21-Across (as suggested by this puzzle’s circled letters?)]) used in reference to his primary painting style. Just me? There are four allied answers in which the circled letters in the word P-A-I-N-T are “dribbled” in dribs and drabs. We’ve got PETUNIA PIG with PAINT going from right to left, PADDINGTON with left to right, UP TO A POINT going down, and TENNIS CAMP going up. TENNIS CAMP is the sort of phrase I have never once given any thought to. Now, the orientation of these PAINTs suggests Mondrian to me more than Pollock. V. orthogonal.

Sort of a crosswordese vibe to EPEE ACTA ARIOSO AVIA OLA ESTER. I love to see the REDBUD tree in the grid, but the BFFS clue, [Buds that are very close], had an unpleasing echo. Yes, I know Shortz et al don’t give a whit about such dupes, but I find them inelegant and largely avoidable. See also: dated I DIG IT crossing I TRY at the pronoun.

re: 24d. [Indian flatbread], ROTI—We ordered Indian last night (channa masala for me, and of course vegetable samosas), and the menu offered several breads: naan, paratha, chapathi, and tandoori roti. Wikipedia tells me that chapati (another legit spelling) and roti are the same thing. There is also a fast-casual Mediterranean chain called Roti ; “Roti are dishes made with round flatbread, often filled with chicken or shrimp, common in many cultures from India to Trinidad and Barbados.” Who can unravel the roti mystery for me? Is it the same as chapati? Do Mediterranean cuisines also include roti rather than just pita? Is anyone in the mood for flatbreads now? 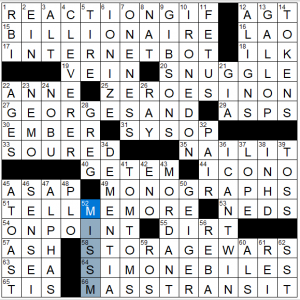 Not a single long answer – and there are ten 10- or 11-letter entries – in Anna’s puzzle failed to make me smile. Crunchy enough to need some crossings, but not overly so.

The stacks in the NW and SE were the highlights for me: REACTION GIF (1a – [Moving reply?]), BILLIONAIRE (15a – [Every one is a policy failure, per a progressive political slogan), and INTERNET BOT (17a – [Faux Twitter follower]) and then STORAGE WARS (58a – [A&E reality show that might be called “one man’s trash…TV”]), SIMONE BILES (64a – [Olympian with four namesake elements in her sports Code of Points]), and MASS TRANSIT (66a- [Commuting option]).

With all the long horizontals, there’s not a ton of connectivity between the top and bottom halves, but there were plenty of highlights to help out:

Theme: “Last Up” – The four down theme answers all have the letters “TSAL” in them, so that when they are placed in the grid, the word “LAST” is going up. 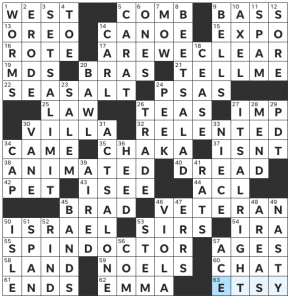 USA Today has been doing a fun collection of connected themes this week – Monday’s puzzle was titled “First Things First” and Tuesday’s was “Right This Second”, and today’s puzzle rounds things out with “Last Up”.

It actually took me a while after I finished solving to understand the theme – strangely, the last words of the two long across answers ARE WE CLEAR and SPIN DOCTOR (both great pieces of fill, incidentally) form legitimate phrases when “up” is added to them (clear up, doctor up), and so I thought I must have been missing something from that angle. I was glad when I found the actual theme though, because it was much more satisfying to me – lots of phrases contain “up”, but very few have this particular letter string! I also thought it was elegant that the “TSAL” was split across different words in each answer.

Lots of small things today slowed me down. I dropped in “It’s all good” for 27d[“No worries”] off of just the I, so getting into the bottom right corner of the puzzle was rough for me – I didn’t want to change my answer because the first half was correct! Knowing the theme would have definitely helped me out there. I also put in “area” for 58a [Territory] (the real answer is LAND), but I was pleasantly surprised when later in the puzzle 48d [Spheres of interest] turned out to be AREAS. My favorite part of the puzzle, though, has to be the clue for SIRS – 53a [Lancelot and Mix-A-Lot] is so fun. 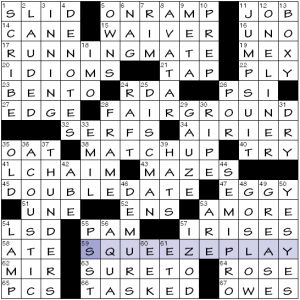 Hate to be predictable, but “speaking of squeezes” I’m a bit pressed for time this morning, soooo… as promised/threatened: 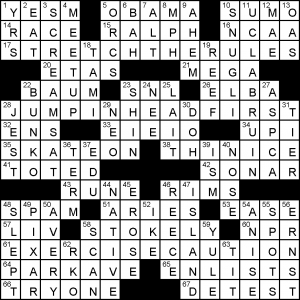 Today’s puzzle by Owen Travis & Jeff Chen works on two levels (kind of). The revealer of the left/right symmetry puzzle is EXERCISECAUTION. Each of three other phrases begins with an exercise-related verb & is a risky idiom: STRETCHTHERULES; JUMPINHEADFIRST; SKATEON/THINICE.

Other tough spots: STOKELY Carmichael crossing old-skool botany EROSE. [Lets have it], which I could not parse, meaning SCREAMSAT. There was some grumbling about [Meas. with city and highway calculations] for MPH (which seems to clue MPG); you could argue, tenuously, that the city calculates speed limits??