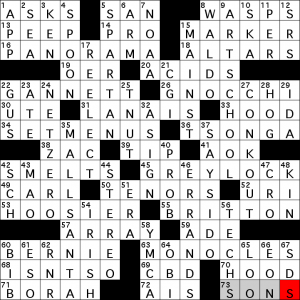 hello and welcome to episode #686 of matt gaffney’s weekly crossword contest, a guest puzzle from Will Pfadenhauer titled “Peak Experience”. the instructions for this week 4 puzzle tell us that we are looking for a u.s. state. what are the theme answers? eight across clues in the puzzle are merely {Highest point}:

all eight (well, really seven) of these answers are names of states’ highest points, minus some generic identifier such as “mount” or “point” or “peak”. in order:

okay, so what now? well, any time you get a list of u.s. states, one fairly obvious thing to do is look at their postal abbreviations. in order, we have NE, WY, OR, MA, IN, FL, OR (again), and ID. well, that’s certainly interesting—you can group them without reordering to spell NEWYOR, MAIN, and FLORID, in each case spelling all but the last letter of a state! (it’s kind of cool how NEW YORK and MAINE don’t even use their own abbreviations, although that wasn’t an option with FLORIDA.) the missing letters are K, E, and A—and wouldn’t you know it, KEA would also be a valid theme answer, as mauna KEA is the highest peak in HAWAII, which is the meta answer. it’s apt that mauna KEA is one of the few states’ high points that regularly appears in crossword grids on its own.

i thought the last two steps of this meta were remarkable. not staggeringly difficult (or really, not difficult at all), but surprising and delightful that the puzzle could exist in this format. kudos to will (a constructor whose name i had not seen before) for both discovering this and turning it into a very elegant meta. it’s a good reason to break some crossword rules, like the ban on repeating entries (HOOD) and the symmetric placement of theme answers (not even close, really). without those last steps, it would have felt like a week 1 or 2, and even with them it felt maybe at most a week 3—certainly much easier than last week’s puzzle.

either way, this was a very enjoyable puzzle and i look forward to seeing will’s name in more bylines in the future! what’d you all think?

This entry was posted in Contests and tagged Will Pfadenhauer. Bookmark the permalink.