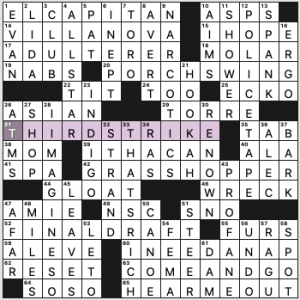 Got a Zoom meeting in 15 minutes (it’s Friday morning in Bangalore, you know!), so I’ll be brief.

I’ve grown so weary of “I NEED A NAP”—seems to pop up every couple weeks in another puzzle these days, doesn’t it? It’s the new A LOT ON ONE’S PLATE.

3.75 stars from me. Seemed to be a bit less enjoyable than I like, and that LIDA at 2d (I don’t know my showtunes) got me off to a faintly annoyed start. Ciao! 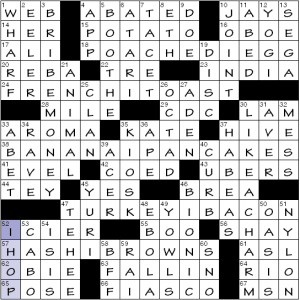 During the solve I ignored the cross-references to the revealer at 52-down, so it was unclear why each of the two-word  breakfasty phrases was separated by an i, or was it meant to be a vertical | bar, the typographical character sometimes called a pipe?

And it turned out that the notorious 52-down is the crossword-friendly [Chain with an alternate 28-letter name … and what you need to write five puzzle answers?] IHOP, the International House of Pancakes. So the gimmick is that we’re just supposed to hop over the I in each of the theme answers. Kind of weird, but points for creativity. I must have mentioned this before, but as a child I thought that the International House of Pancakes was like the cafeteria at the United Nations, and that it was some sort of franchise version for the masses.

Puzzle theme might have felt stronger if those four instances of I were the only ones in the grid, obviously a much more challenging construction.

So here’s a globe-hopping Ernie Kovacs just trying to get a simple breakfast:

Theme: Each themed answer begins with “D” and ends with “ANCE,” literally breaking up the word “DANCE.”

Maybe it’s because I’ve been paying even closer attention to theme since I started writing about them so frequently, but this one was particularly easy to spot. “Break Dance” as a title is clever, and the puzzle provided a break from the usual morning routine.

Diagonal formations in grids are some of my faves, for some reason, even though I sometimes feel that it walls off answers more than I’d like it to, something I noticed today as well. Stella’s clues, however, still make good use of the crosses with the center themed answer (DUTCH RESISTANCE). I’ve not seen the word “CRUD” (33d [“Filthy gunk”]) in a long time, but it provides a nice example of this, meeting the themer at its R. I also enjoyed the inclusion of 35d [“‘Dracula’ author Bram”] STOKER. Despite my English degree, I’ve never read the classic vampire story, but I loved Bram’s inclusion in The Sherlockian, in which he teams up with Sherlock Holmes author Sir Arthur Conan Doyle.

My Friday faves for today are as follows:

Definitely worth the break in the day to solve this puzzle, especially if you add in happy dance accompanying a successful finish. Have a great weekend! I’ll see y’all on Sunday.

This one’s for the biology majors. As the title suggests, we’re looking for the building blocks of the body, and the grid presents them from smallest to largest. 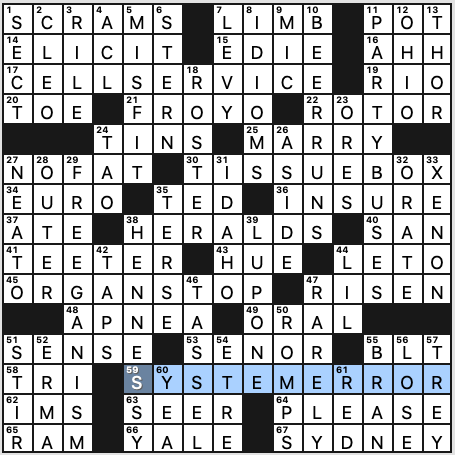 Very nice. All entries are familiar phrases and yet the keywords in question all change meaning (more or less). Solid execution.

Tons of fun fill, especially if you like alcohol: BEER RUNS, PARTY BUSES, and HENNESSY. FREEGANISM [Anti-consumerist ideology] rounds things out and is also fresh, fun fill. Nothing to scowl about in the fill (well, maybe ETRE), so I’m suitably impressed with this constructor’s sophomore effort (he had one NYT grid in March of this year).

Clue of note: 5d. [Island of ___ Toys (place visited by Rudolph)]. MISFIT. Factoid I just learned via Christmas Specials Fandom: In the original broadcast of Rudolph the Red-Nosed Reindeer, the toys only appeared in the scene where Rudolph and co. accidentally land on the island.  Their subplot is resolved by “Santa Claus promising to find homes for them after Rudolph tells him about the island, and later saying that the island would be his first stop on his annual run that year. When viewers complained about not seeing the full resolution to this, the following year’s broadcast added a new scene to the ending, showing Santa arriving to pick up the Misfit Toys, which has remained in all subsequent releases of the special.”

Good morning, besties! When I opened this puzzle I noticed there weren’t very many long answers. (There’s only three that I’d call “long,” one thirteen-er along the middle and two nines. There are eight eight-letter words and seven seven-letter words, but I consider that “mid-length” fill.) Sometimes a themeless puzzle can drag if there aren’t long flashy entries, but WOW that is the OPPOSITE of the case with this puzzle. It was so much fun to solve. I still don’t have a good definition for a “sparkly” puzzle beyond “I’ll know it when I see it” but this was a very sparkly puzzle. 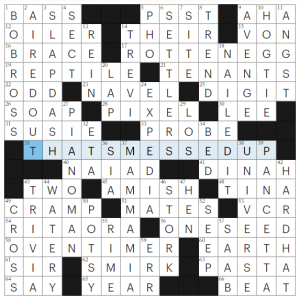 Things that made me say hmm: