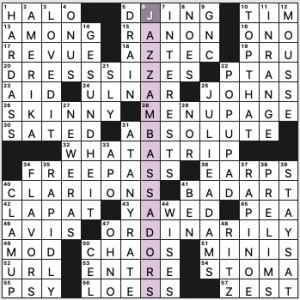 What the…? Why did this feel like a Friday puzzle rather than a Saturday? I even spent the first 5 or 10 seconds of the solve time looking to see if this had Brooke’s customary diagonal symmetry or the NYT’s standard rotational (it’s the latter).

Fave fill: AZTEC, “WHAT A TRIP!”, HARDASS (which I filled in off the H but assumed I would have to change—delighted it was actually the answer!!), “LOVED IT,” GESUNDHEIT, “TOP THAT!”, and the great RAPINOE.

Did not know these two things:

The crossings were smooth enough that I filled in that 15 and that 10 without a struggle. 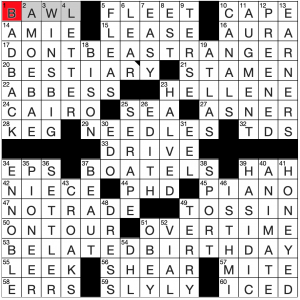 It is official: the “Stumper” is DEFINITELY easier! I got a Brad Wilber puzzle done in under 10 minutes! Brad’s editing for the Boswords puzzles make those quite the challenge, and this was not quite that hard. Perhaps just thorny enough at the beginning, but that is fine; we don’t want it TOO easy! Fun one today once the toehold was gained. This probably means next week will be a doozy! 4.7 stars from me.

We will stop there. Off to do more puzzles! 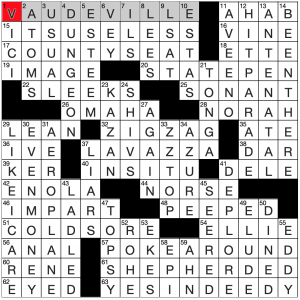 Had fun with this one. Quick write-up today; we are out of town on a biking vacation! I have done a few Craig Stowe puzzles in my days on this blog, so that may have helped wipe this one out fairly easily. I hope! Time was just a hair over 5 minutes. I’ll take it! 4.5 stars from me.

This appears to be a debut for Billy Bratton! Congratulations!

THEME: The word BETA gradually goes away at the beginning of common phrases. 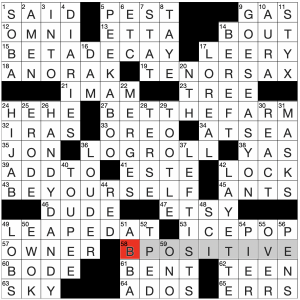 Excellent grid today. Lots of enjoyable fill, to the point that I really didn’t see (or care about) what the theme was. I missed the clue for BETA DECAY entirely, and wasn’t expecting a revealer in that position so had to hunt around once I’d finished the solve.  No harm done. 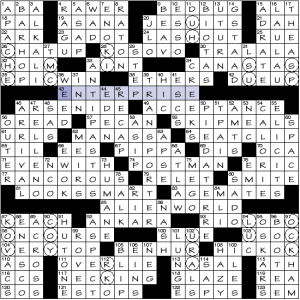 I like the visual setup of this one. It has to do with the Star Trek technology of transporter beams.

Anyway, we’ve got six crew members from the original series whose first parts appear in the upper section of the grid … and conclude in bottom section, in the same column. And this is where the conceit breaks down a bit. The technology (which itself is philosophically problematic—more on this later) is meant to transport people and things wholesale by disaggregating and reintegrating their very molecules. So it’s jarring to see them split in two, all disjunct. On the other hand, I concede that there’s no good way to visually represent the process, so this is probably as good if not better than any other. 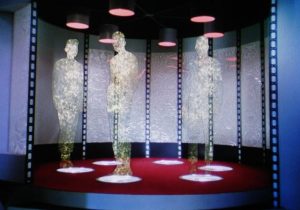 Visually these six more-or-less evenly spaced columns evoke the visual style of the transporter room. Another plus.

Now, I happened to swipe that image from an ars technica article about the philosophical conundrum I alluded to above. Convenient, because I wasn’t sure which link I was going to provide to explain it, which I’d first encountered years ago in some book or other. As I’m already writing this post on the late side, I haven’t read the article, but a it seems extensive and I’m confident it covers the bases adequately.

No time to write about the rest of the fill, which was, ermm, solid?