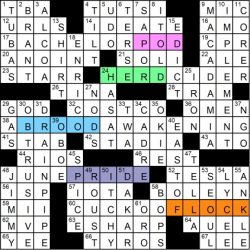 Good day, everyone! Hope all is well with you as we turn the page to August! Just like that, the long, hot summer is winding down. Well, it still might be hot where you are!

How about some animal hijinks in a grid to start the day? Why not! Five theme entries are punny takes on common phrases/nouns, with one of the words in each being replaced by a similar-sounding word that is also a name given to a group of animals mentioned in the clue.

Outside of the theme, the highlight for me was the stacked nines in the the northeast, with IMPLEMENT (10D: [Put into effect]) and MACADAMIA, which is probably the only topping on a cookie that I wouldn’t mind outside of chocolate chip/fudge…and I’m not much of a nut eater at all (9D: [Hawaiian nut with a butter-like flavor]). There is definitely an heavenly aura to the puzzle with GOD (29D: [Pantheon member]) and ANOINT (20A: [Consecrate with oil]). Not sure I had ever come across the term BRANT in relation to a goose, so liked learning that (2D: [Small goose]). Though not referencing Ethiopia, seeing a reference to an African tribe, TUTSI, immediately made me think of the current emergency in Ethiopia where over a quarter of a million people are suffering a man-made famine while other atrocities are rife in the Tigray region (4A: [Resident of Rwanda]).

Before heading out, love the timing to the clue of LEE, the first Hmong American to qualify for — and win in — the Olympic games (67D: [Gymnast Suni ___ (gold medalist at the Tokyo 2020 Olympics)]). Her backstory is beyond captivating, yet involves tragedy (her father, who immigrated from Laos to the US along with Sunisa’s mom, was paralyzed in a fall in 2019 and Suni had to compete in the national championships soon after). Definitely get to know more about her! And speaking of the Olympics…

“Sports will make you smarter” moment of the day: SEOUL (53D: [1988 Olympics city]) – Remember when the Summer and Winter Olympics occurred in the same year? Well, 1988 was the last time that has happened, with the Summer Olympics in Seoul, South Korea and the Winter Olympics in Calgary. What were some of the highlights of the 24th Olympiad? Well, the late Florence Griffith-Joyner became the fastest woman in the world with three gold medals (100m, 200m, 4x100m relay), Canada’s Ben Johnson shocked the world by winning the gold in the men’s 100-meter dash (then was stripped of the medal after a positive steroids test), diver Greg Louganis cracked his head on a diving board while attempting a dive in the preliminary round — but eventually came back after being stitched up to win gold for a second consecutive Olympics — and American boxer and soon-to-be boxing legend Roy Jones Jr. was on the short end of, almost inarguably, the worst judges’ decision in the history of the sport, amateur or professional, in losing a gold-medal match against South Korea’s Park Si-hun. (Two of the three judges on the five-judge panel who voted Park the winner were eventually banned from the sport for life.) 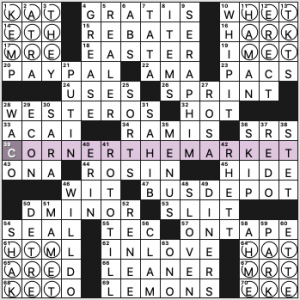 What are the ethics of reviewing a puzzle by your co-editor, with whom you’ve worked closely (at Crosswords With Friends) for the past seven years? I’ll be brief. The theme revealer is 39a. [What you might do after some financial trading … or in this puzzle?], CORNER THE MARKET. The 3×3 corners of the grid contain the 9 letters of THE MARKET scrambled up, which is no mean feat. The crossings in those corners have legit crossword fill, though bits like -ETH and SHAK. are a bit crusty, and there’s a TEC elsewhere. Tough for Tuesday—might have been better placed on a Wednesday, as there’s other fill that is on the harder side.

Fave fill: WESTEROS (can’t believe it took me a bunch of crossings to remember this name—it would have been an instant gimme two years ago!), BUS DEPOT (It’s been decades since I rode Greyhound), LEMONS with a car clue because I think my aunt’s license plate says LEMON, “WHIP IT,” and “WILL DO.”

48d. [Unkempt person], SLOVEN. The noun is quite uncommonly used, no? Adjective slovenly, sure.

I’ll sign off without a rating, and leave you with the New Wave stylings of Devo.

Theme: Grid-spanning phrases whose outer letters spell RAIN. The revealer is CAUGHT IN THE RAIN (10d, [Getting drenched, say, or like 3-, 4- and 8-Down?]). 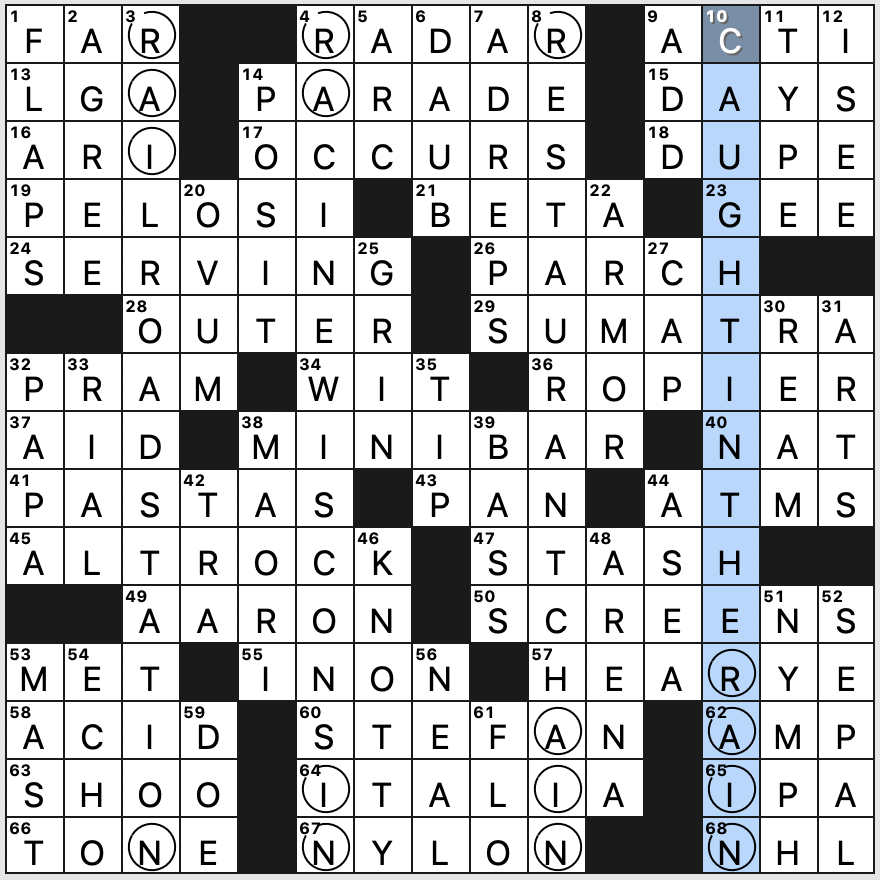 Note the progression from left to right as the circled letters migrate from top to bottom. That’s a nice little touch that I’m choosing to interpret as an increase in rain intensity.

Not a lot of flashy long fill, but that’s probably due to four 15-letter themers. Still, it’s all clean and smooth.

The only one I raised my eyebrow at is ALTROCK [Music category that includes emo and grunge]. It’s listed on the Wikipedia page, but the genre is usually called “alternative rock” or just “alternative.”

Solid theme and clean, if not sparkly, fill. 3.8 stars.

No, the puzzle isn’t being vaccinated. Different kind of shot. 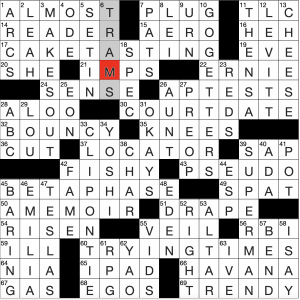 Nifty set! All different kinds of “trying,” but indeed they are trying times! I tried to guess the revealer by just staring at the other three entries for a while and came up completely empty. But a very solid and very tight connection indeed.

CAKE TASTING could’ve easily been the more familiar WINE TASTING, but I prefer the former. Less familiar to me, but more fun.

Excellent longer answers, though the “first base” clue for  MAKES OUT makes me want to barf a bit… that’s solely due to me being in middle/high school hallways and witnessing more than my fair share of awkward MAKE OUT sessions. I prefer not to assign it to a base, because I just try to convince myself that it ends there.

Only nits are the articles in A MEMOIR and THE NSA. A MEMOIR feels like a partial to me… I’m out to lunch on it a bit though because, as the clue suggests, it does often appear as a subtitle.

Fun puzzle all around.

Matt Jones’s Jonesin’ Crossword, “It’s All There For Your” – Derek’s write-up 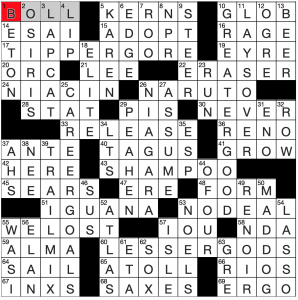 The revealer helps, unless you are REALLY perceptive! I couldn’t even remember what the theme was as I write this, and I SOLVED the puzzle already!

It’s easy now that you see it! Such a nice variety in the list of theme entries that it is hard to see what ties them together at a first glance. Makes for a satisfying puzzle solving experience. Not a lot of obscure pop culture in here, but there is a bit. As is usually the case with a Matt Jones, puzzle, I feel like I learned a thing or two. Or three! 4.6 stars from me. 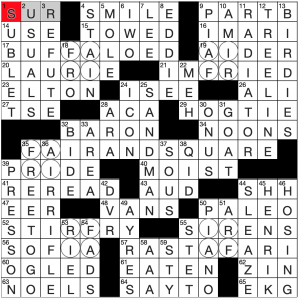 I usually write the them answers first, but there really aren’t any. The central answer does reveal what is happening in the circled letters:

Sure enough, we have the word FAIR spelled out in the five sets of circled squares, including the one involving the word FAIR in the central entry. Clever idea, and a fairly good execution. Everything is symmetrical, with the exception of the one that includes the thematic FAIR from the middle. Different, at the very least! 4.4 stars today.

What a delectable puzzle! It was so smooth that it seemed more like a morsel since it was over too soon for me. I certainly want seconds, and wouldn’t say no to a larger portion, say 21×21? If you can’t tell, I loved this one today and it’s truly a delight! 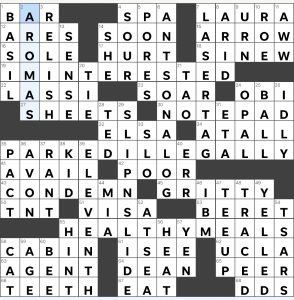 Theme: different herbs are in the middle of the themers

Paying more attention to themes has me picking up on them more quickly. Today’s title had me primed and ready for spotting herbs stuffed inside the themers. But the tricky clues misdirected me a bit. “MINT” is stuffed inside IMINTERESTED, “DILL” in PARKEDILLEGALLY, and “THYME” in HEALTHYMEALS. Also, the herbs progressively shifts from the front of the word, to the middle, to towards the end as the themers progress. Very cool indeed. For the first themer clue, I so badly wanted to put “I’m all ears” because that’s a phrase I use personally. The second one was spot on for me but for the third I again was misdirected until I got crossings for the ending. I had the first half but wanted to end with with “snacks” or “food” instead. All in all, a tasty theme and some bonus BASIL and AROMAS to boot!

Stumpers: LASSI (mango and salty lassis are excellent but Greek or Turkish “coffee” with cardamom comes to mind first), IMINTERESTED, and HEALTHYMEALS—and that’s it

Truly my favorite puzzle that I’ve solved so far! I started solving regularly during 2020, so it’s not been that long but as a newer solver it’s always such a joy to have fill fall into place or like today recognize the theme and work towards filling it even if I don’t have it quite right. I felt clued in and the ease of solving is such a delight. There’s no other word for it. Hope you all enjoyed today’s puzzle as much as I did!