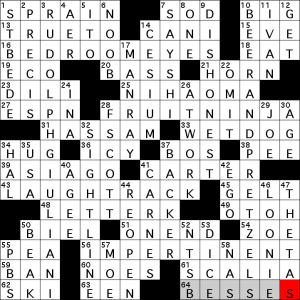 hello and welcome to episode #687 of matt gaffney’s weekly crossword contest, “Fifth-fifth Friday”. the instructions for this (indeed) fifth friday of the month tell us that we are looking for a well-known fifth. what are the theme answers? i don’t know! but there are six long answers, so let’s start with the assumption that those are all thematic:

all right. the two ten-letter across answers are interesting because they’re both made up of five-letter word pairs. so maybe each of those words (FRUIT, NINJA, LAUGH, TRACK) relates to one of the other long answers? that’s at least a plausible structure for this slightly weird grid layout with themers going 11-10-10-11 across and 15-15 down.

okay, so how would it work? NINJA puts me in mind of the ninja turtles, who are a famous foursome. that’s almost like a fivesome, right? of course, one problem here is that there’s no single canonical fifth turtle; another is that none of the other theme answers in the grid appear to have anything to do with any of the ninja turtles.

what else is there? brainstorming about fifths, i notice that the clue for CARNES is {Kim who hit #1 with “Bette Davis Eyes”}, which not only dupes EYES from BEDROOM EYES but also mentions bette davis, who was known as “the fifth warner brother”. is that anything? i’d love for it to be something. if stu sutcliffe (the most prominent among several people occasionally dubbed the “fifth beatle”) were in the clues, that’d be great. but he’s not.

among other ordered lists of at least five things, several more show up in the clues:

i rather suspect none of these are relevant, for various reasons. first, reusing the list of presidents would be inelegant; second, there does not seem to be any connection between any of these and the long answers; third, the grid itself is only a 74-word grid with six very long answers, suggesting to me that there isn’t a whole bunch of other hidden theme material in the grid. the clues are admittedly less constrained than the grid, but still, i think this meta might be just about the six long answers.

having said that, i am forced to confront the reality that i have no idea what to do with the six long answers. what else is there? RUDOLPH again suggests a canonical ordered set of, i guess, nine reindeer (the fifth would be comet, in either the original poem with only eight reindeer or the lyrics to the song with all nine), but there’s nothing to connect to reindeer anywhere else in the puzzle. and IMPERTINENT just cannot be used straight-up semantically like that; there has to be wordplay of some kind (taking the fifth letter of some hidden substring or something like that).

so, yeah, i am out of ideas and, i think, out of time. (i haven’t seen anything from matt about the deadline being extended even though the puzzle came out a few hours late on friday.) i’m going to try STU SUTCLIFFE as a hail mary just because he’s the most famous fifth i can think of. i guess i’ll find out from the comments section what was actually happening, because i got absolutely nowhere on this one.