Fireball is on summer vacation until September.

Congrats to Sara Muchnick, Doug Peterson’s co-constructor, on this, her debut puzzle.

Their theme is TURNED THE TABLES (36a, [Shifted an advantage, and what we’ve done in this puzzle’s circles]). The circled letters in the four corners spell out the word TABLES but in different (but always clockwise) configurations. 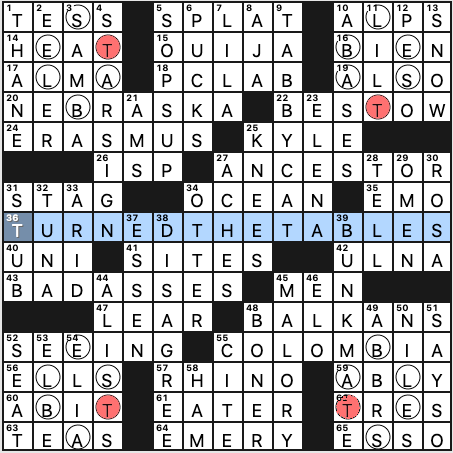 But it was hard to find this pattern. In fact, if I hadn’t been writing this post, I probably wouldn’t have seen it. We normally read (and solve crosswords) left to right before moving down, so jumping from the NW to the SW then back up to the NE to follow the pattern doesn’t make sense to me. I would have gone from the NW to the NE to the SW and then the SE. And I would have had the T start at the top of its circle, then finish at its bottom. Like in my doctored-up pic below. Maybe that would result in some tough-to-fill sections, but to me it flows better. 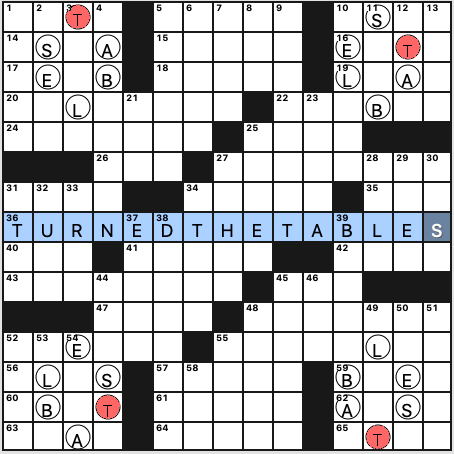 Moving on, we see STAR SIGN, BUNKMATE, NEBRASKA, COLOMBIA, TABBY CAT, BAD ASSES, ANCESTOR, and ERASMUS topping the fill. That’s way more than usual, no doubt due to the theme being relegated to the corners thereby leaving space for sparkly stuff elsewhere.

I like the theme, but I didn’t detect the pattern until well after the solve. Loads of fun fill and cluing. 3.5 stars. 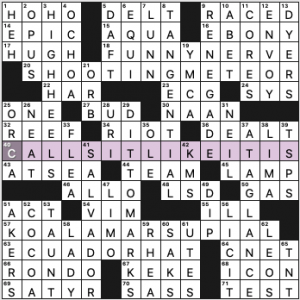 Ben’s traveling today, so I’m subbing for him.

Theme revealer is CALLS IT LIKE IT IS, 40a. [What each asterisked clue’s answer does, to correct a misnomer?]. Anyone else try TELLS IT first here? Each of the four themers takes a familiar term that is scientifically inaccurate, and “corrects” it:

Toughest crossing for most solvers, I’ll bet: 5a. [It’s found near a trap], DELT crossing 7d. [Sally ___ (English teacake)], LUNN. I know this teacake only from crosswords, so I mostly rely on crossings to remember if it’s Bunn, Dunn, Munn, Nunn, Lunn, etc. The DELT clue is particularly tricky—we’re talking muscles, and the deltoids are near the trapezoids. DEBT and DENT are actual words, so if you don’t know LUNN …

Overall, the fill and clues had a sort of old vibe. Very little of it has to do with anything specifically from the past decade. KEKE Palmer was an actress but not yet a TV host, and 2017’s “LADY Bird” is perhaps the only thing from the last five years. Even the TNT slogan “Boom.” dates back to 2014.

3.5 stars from me. Neat theme, but the nonthematic parts of the puzzle didn’t offer much fun for me.

Theme: Each themed answer adds ENO to a phrase which could otherwise stand on its own. The title is also a reference to the Monty Python film Life of Brian.

Revealer: 67a [“Brian added to this puzzles theme answers”] ENO 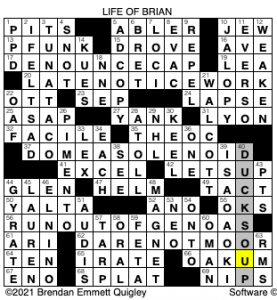 First and foremost, it’s impressive how many themed answers are squeezed into this puzzle. . I wasn’t familiar with Brian Eno before this quiz, so the revealer didn’t necessarily help me until I filled it in via the crosses, but then I saw the pattern. It was certainly a creative theme, and it’s neat when ENO is removed. However, I thought 20a’s LATTICE WORK was a stretch sans ENO.  I did learn both what “solenoid” (a wire that works as a magnet when holding an electrical current) and a genoa sail are (30d [“Hull piece”]’s KEEL also refers to a boating term).

Save for LAUREN Alaina (45d [“Country singer _____ Alaina”]), the puzzle’s references to George Clinton via 13a [“Clinton’s collective, familiarly”] (PFUNK), Franklin Delano Roosevelt and Joseph Stalin’s meeting in YALTA via 50a, BRET Stephens (6d [“Pulitzer Prize-winning columnist Stephens”]), Derek WALCOTT (21d [“‘Omeros’ poet Derek”]), and ISAO AOKI (39d [“First Japanese player to win a PGA tour event]) reinforce a male-dominated puzzle that has a theme centered around another man. As the daughter of an avid PGA watcher, I did appreciate the fact about ISAO AOKI.

Other clues that caught my eye:

Overall, I think that the theme carries this one, but it could have used some more contemporary references to help live up to the medium skill level assigned to this grid.

Theme: Each theme answer fits a “X [in/on] the Y” pattern, where the first word starts with PA and the last word ends with CK 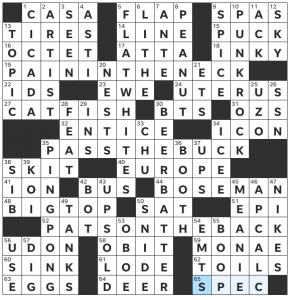 Shorter write up than usual today because I’m actually going into the office for work this morning, can you believe it?? Anyways, I liked this theme a lot! It’s a nice touch that all the theme answers have “THE” in the middle of the PACK; It worked well with the puzzle’s title.

The fill in this puzzle is all around top-notch. All four of the long downs (PING PONG, FLAT WHITES, BEER BATTER, PUNK ROCK) are great bonuses, which is especially impressive because each of them crosses two theme answers. There’s a lot of very strong 6 and 7 length fill too (see: BOSEMAN, UTERUS, the timely clue on CICADA). As I worked my way through I was consistently delighted by the words I found, which is one of the best things I can say about a puzzle. 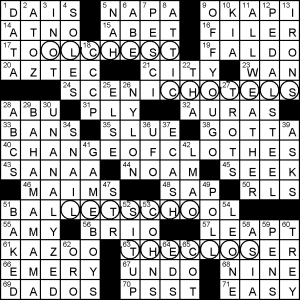 Today’s puzzle theme by Bill McCartha is an ambitious example of a genre that isn’t my favourite: a single repeated word scrambled and hidden between two parts of a theme. The central explaining answer is CHANGEOFCLOTHES, and the seven letters in CLOTHES are found scrambled in four other entries. That’s a lot of letters to have to find in an entry, so, for the most part, the entries lean towards the vague: TOOLCHEST, SCENICHOTELS, BALLETSCHOOL. THECLOSER is a specific TV show though, and now I know something about Kyra Sedgwick, whose name I mostly just have memorised as a name for crosswords.

The grace notes, as is often the case, come in the long down answers: OFFYOUGO, ALLWEATHER, somewhat incomplete-sounding PEDALSTEEL and reduplicative BAHAMAMAMA.

This one measures up!

THEME: Units of measurement are homophones of common phrases. 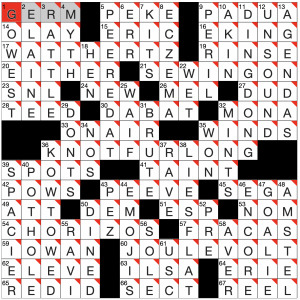 Sign of a good theme is when it can’t be replicated. And no way in hell can you replicate this!

Really fantastic little set. And yes, it’s little, but it packs a punch. Okay, you may have to use a twinge of imagination to liken VOLT to VAULT, but even that makes me smile.

The themers are so full of scrabbly letters themselves that it was probably more difficult to fill cleanly than one might imagine. It is indeed quite clean, but I personally would’ve preferred a lower word count on this one. Of course, it passes because the theme is so awesome, but were it anything less I’d feel a bit more blah because most of the solve was spent on familiar fill.