Our theme today consists of common food pairings of the form “X and Y” except the X has been replaced with a non-food homophone, resulting in crossword wackiness. 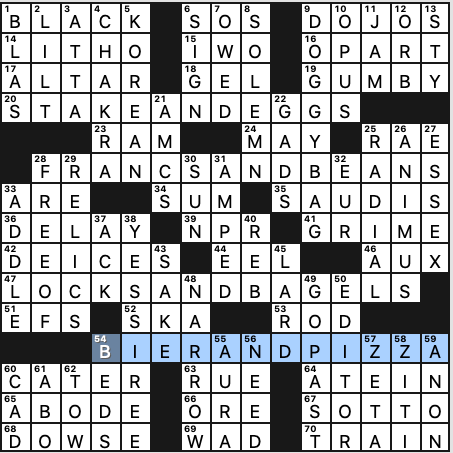 My first thought was that the “stake” for “steak” pun has been done many times before, but then I realized the there was something connecting all the theme entries, namely the food pairing idea. Then I realized these are all would-be names for eating establishments aimed at a specific clientele, and I enjoyed the imaginative nature of the theme. The consistency of having the pun in the first word each time is also a nice touch.

Fillwise, DOGGY BAG (being theme-adjacent) and “YES SIREE!” make for fun long entries. I struggled in the NW corner since I spelled CHAKRA as SHAKRA which made 1a [Coffee order] look like FLASK. (Sure, why not.) It didn’t help that I didn’t know 1d [Lesage’s “Gil ___”] should have been BLAS instead of FLAS.

It took me a while to warm up to this theme, but in the end I liked its playfulness and consistency. 3.8 stars. 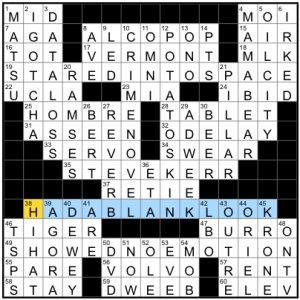 Alrighty, this one’s got grid art. I’m not sure if I’m parsing it correctly—is it a mouthless face, and HAD A BLANK LOOK spanning the shoulders, and the black squares in the UCLA – MIA – IBID row are the blank-look eyes? That is my best guess. If the TIGER – BURRO row has a mouth in it, I don’t get why the RETIE row pinches the face in so sharply. And the black squares that wrap around ALCOPOP, I don’t get. The theme entries relate to that blank look, with STARED INTO SPACE and SHOWED NO EMOTION also here. I don’t see anything else that ties into the theme, nor a revealer.

The grid has 55 blocks, which is a heckuva lot. You wouldn’t expect to see more than about 40-43 blocks in a puzzle this size.

Some awkward fill that seems tough for a Wednesday: AGA Khan, SERVO, crosswordese AGORA and ORIEL.

Hey all, it’s Sophia filling in for Ben today. This week’s AVCX was sent with a note that this puzzle is paired with an upcoming one by Quiara Vasquez, and if that crossword is anything like this one, we should all be in for a treat. 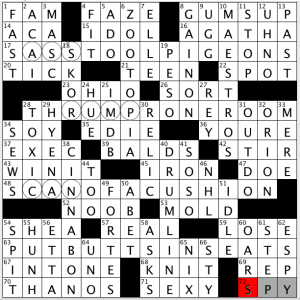 This puzzle elevates the classic “add a letter to make a wacky phrase” theme by having both the base phrases and the inserted words fit certain categories, adding a layer of interest. It has the perfect revealer too, in that it’s a fresh phrase that perfectly describes the gimmick. I think of “can” as being slang for “bathroom” more than “butt” though? I guess it’s always good to learn something new from crosswords…

I love solving Paolo’s puzzles first and foremost because of the cluing. There’s a bunch of modern pop culture references (See today’s references to Promising Young Woman and WandaVision, among many others), plus some sneaky misdirects ([Does a Singer’s job] for SEWS gave me a genuine aha moment) , plus jokes and asides to the solver – not a single clue in this puzzle is wasted, and as a solver I really appreciate that craftsmanship.

It’s not just the cluing though – the fill is also great! It’s physically impossible for me to dislike a puzzle with ZOOTOPIA and CINNABON in it. The only piece of fill I didn’t like was HUNH, but at least the clue [“?!?!?!?!?!” interjection, with or without the third letter] made it clear that the puzzle kinda knows “huh” is the preferred spelling. 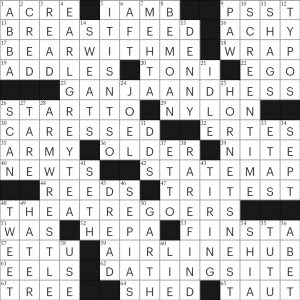 I have to be brief this morning, but gosh this was a fun puzzle! Highlights: 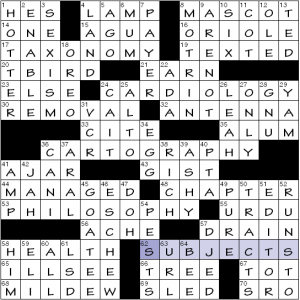 These are entertaining, and admirably do not share etymologies with the actual disciplines. Note also that each of the four has a distinct suffix: -{O}NOMY, -{O}LOGY, -{O}GRAPHY, -{O}SOPHY.

Kind of feel that this one could have been called ‘Pseudosciences’ but I also admit that if that had been the case, I’d have called out philosophy for not strictly being a science. So this’ll do.

Theme: “It Started Out Alright” – Each theme answer begins with a synonym for “alright”. 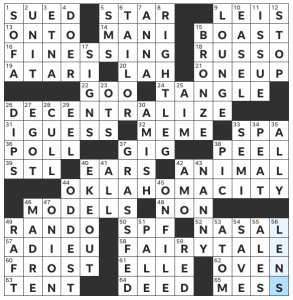 Fun theme today from Kim (and editor Amanda Rafkin) – certainly more than just alright, in my opinion! My favorite answer is DECENTRALIZE because of the sheer amount of the word that is comprised by the synonym; it’s more interesting to me, wordplay wise, than OKLAHOMA CITY, where the synonym is just the first two letters. (As a Seattle basketball fan, I also still have a grudge against the Thunder so….)

This puzzle played very easy to me, I think mainly because the segmented grid meant there weren’t too many long answers that weren’t part of the theme. Once I was into a section, it was mostly short words that I could fill in quickly. Of course, the fill needs to be very clean for this to work, and it certainly is here. For that reason I think this would be a great puzzle to give to someone trying to start doing crosswords – it’s simple but clean and fun. Favorite pieces of fill for me today are GRASS-FED, I GUESS, and RANDO (a word I’m very glad to see catching on as legit fill). 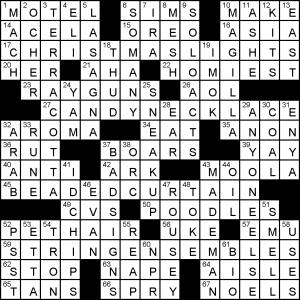 Today’s puzzle by messrs. Henestroza & Mossberg features an offbeat list theme: things on strings, or STRINGENSEMBLES. I tried to stretch STRINGQUARTETS to fit here first. I had the same issue trying to make BEADCURTAIN fit where BEADEDCURTAIN was intended. The other two themers are CHRISTMASLIGHTS and a CANDYNECKLACE.