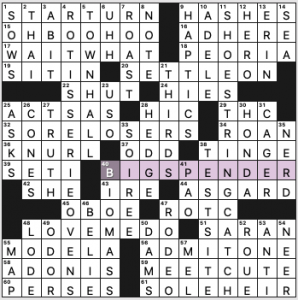 Been distracted by The Suicide Squad on HBOMax. Focus! 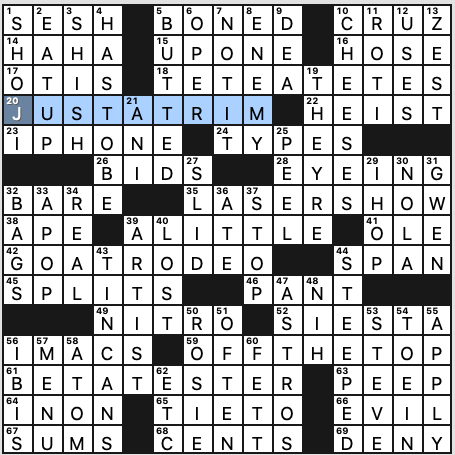 As you can see, the missing letters spell HAIR, which is a very nice touch, and, elegantly, the remaining letters all comprise crossword-legal (though unclued) entries. Well done!

I will be honest though. Once I uncovered JUST A TRIM and the gimmick at the top of the grid, I was expecting a corresponding gimmick at the bottom of the grid. I realize that doesn’t jibe with the title, but during the solve, I hadn’t even seen the title. So I felt a little disappointed just to get a second revealer (although it is actually a little more on point than the first one).

Be that as it may, this is a tidy little theme, with a nifty gimmick that’ll get solvers to “think outside the box” as it were.

Top fill: TÊTE-À-TÊTES, LASER SHOW, BETA TESTER, TIN CANS. I’m not sure I’ve heard the phrase GOAT RODEO [Situation that’s really out of control], but maybe I have. Still, I needed almost all of the crossings. Is “HAS TO BE!” enough of a colloquialism to warrant crossword-worthiness? I’m on the fence on that one.

Clues are mostly served straight up, but there are a few clever ones. I like [Safe job, say?] for HEIST and [Low-tech mobile phones?] for TIN CANS.

A nice theme and grid that left me wanting more. Four stars.

Theme: Each themed answer ended with a synonym for happy. 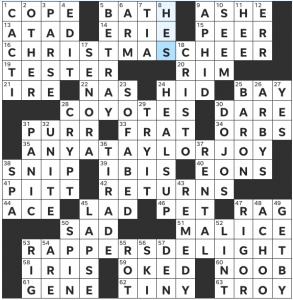 I always feel an extra bit of joy on Fridays because we’ve reached the weekend, so this felt like a particularly apt theme. The theme clues and answers were solid, making for a smooth file. I couldn’t remember ANYA TAYLOR-JOY’s last name (though now I will certainly not forget it), so I filled in ANYA and kept going until the crosses did the work for me. It’s pretty nifty that her name ends with JOY for this puzzle, let alone in general! That said, the theme wasn’t something I felt I needed to finish the grid, but it made me smile afterwards nonetheless.

We also got a few furious clues/answers in here as well, which is funny in a “happy” puzzle. There’s 21a [“Anger”] that brings in just a short burst of IRE, as well as 36d [“Angry speech”]. I won’t got on a TIRADE, but I’m not a fan of the repeat angry/anger, personally. MALICE (51a [“Evil intent”]) was a nice SAT word to include here that is rage-adjacent.

Grid-wise, I thought that there were some nice longer words included. I’ve come to enjoy those symmetrical puzzles that have the quick hops between three- and four-lettered clues that we see in the IRE – NAS – HID – BAY and ACE – LAD – PET – RAG combos. It’s just a hop, skip (sometimes literally), and a jump through that feels refreshing.

That’s all from me! Have a good weekend! 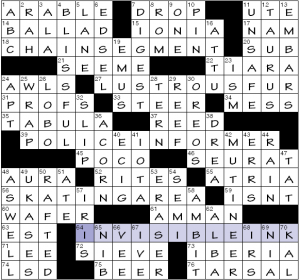 This 16×15 played tough until I got to the revealer and was able to make sense of the terse one-letter theme clues. 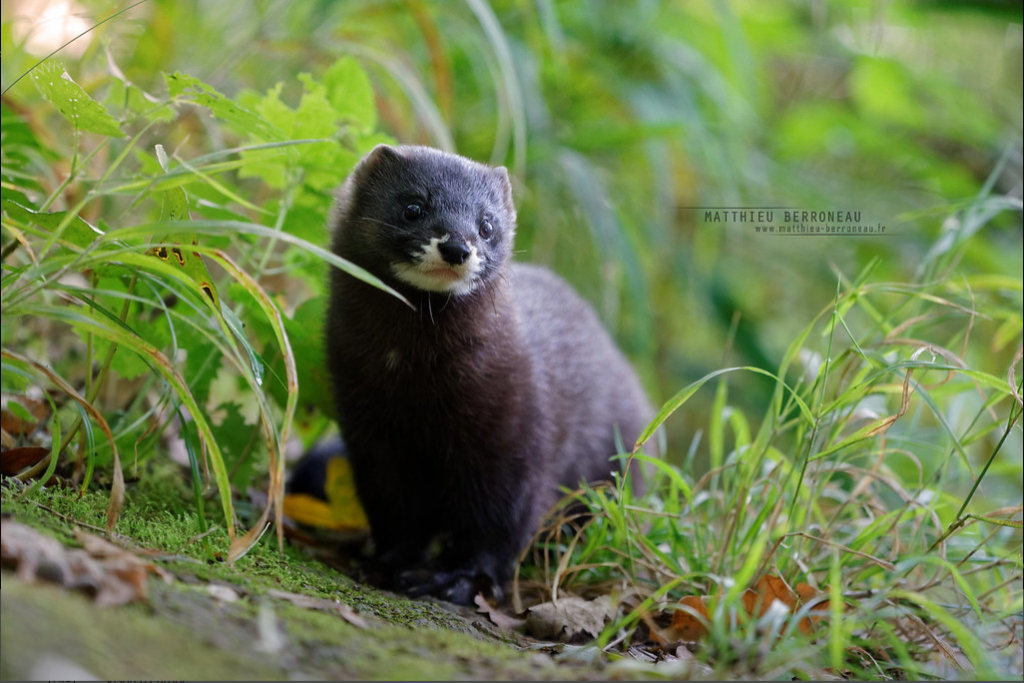 Clearly, the letters -INK have been dropped from the clues. Or at least they’re not discernable to the naked eye.

And using acronymfinder.com we see that LMFR can stand for … absolutely nada. Feel free to make up your own. Like maybe, for real.

Misremembered the John Hiatt/Neville Brothers song as “Invisible Ink” when it’s “Washable Ink“. So let’s find something else.

Another great debut puzzle from the Inkubator this week! Congratulations, Elizabeth!! 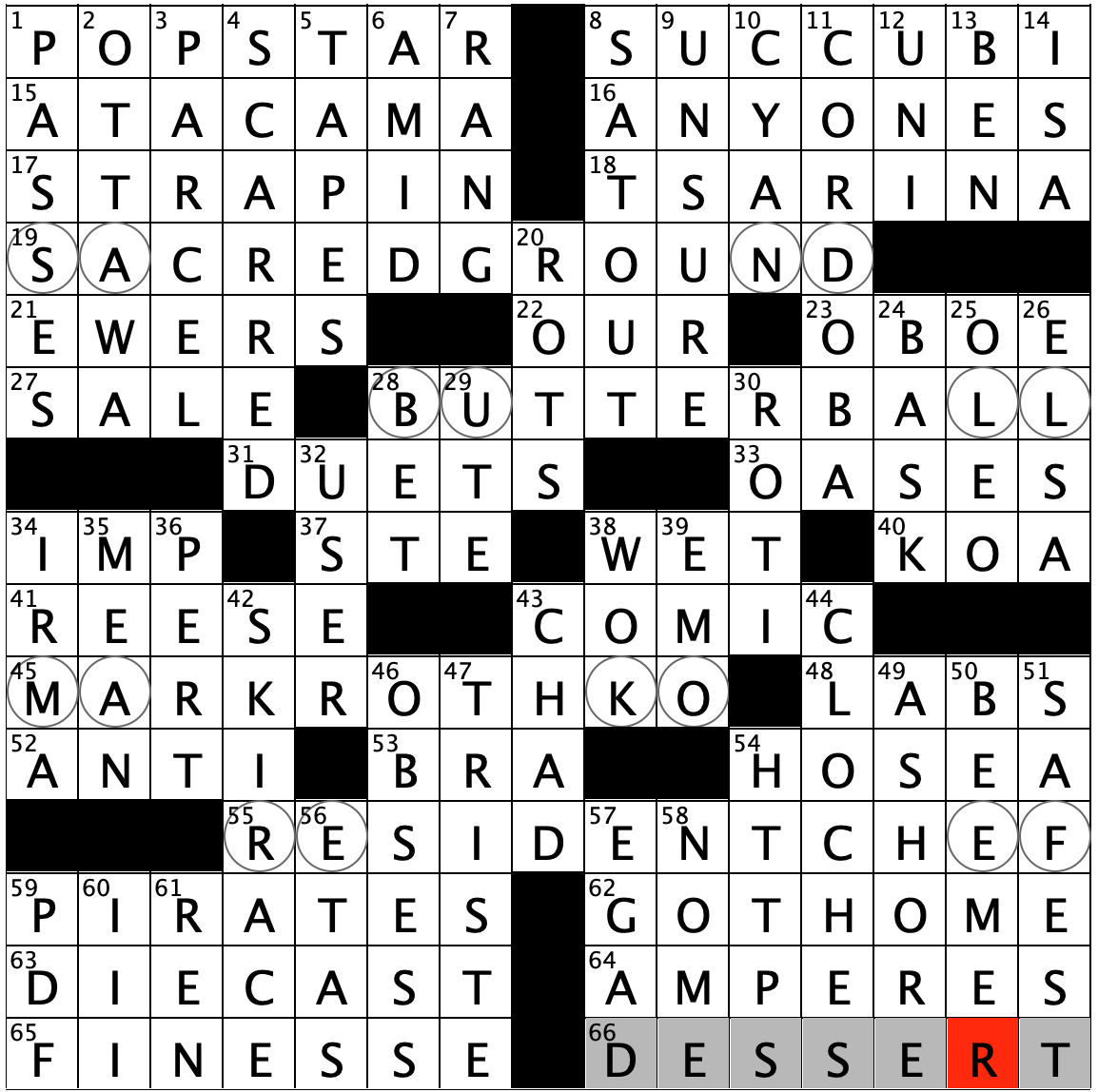 Sharks are hidden in the circled letters of the the themed answers. I liked the shark choices here – with so many species to choose from, these felt well known enough to be interesting and allowed for a nice set of answers. I am also a big fan of themes where the themed answers seem to be completely unrelated – and this theme does that well too. If I’m being nit-picky I’d say the only thing I didn’t get was the ‘why’ of it – I don’t see a clear reason for the splitting of the sharks – unless that’s the attack part of ‘Shark Attack’?

Shout out to my nephew Joey, whose OBSESSion with sharks definitely helped my solve.

Overall the puzzle is impressively smooth. Not a lot of crosswordese which made every part of the solve fun. Good layout too for a nice flow from top to bottom.

On a personal note, I spent much of the last year with Long Covid symptoms that interfered with my solving abilities (yet another reason you should get vaccinated!) and I’m thrilled to be back on the team here at Fiend!

I’ll leave you with Aaron Tveit and Gavin Creel singing “Take Me or Leave Me” at one of my favorite theater events, MISCAST 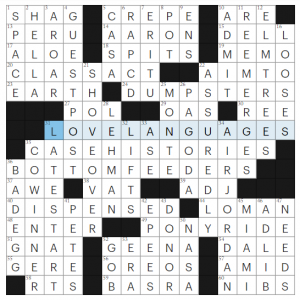 The lower entry of the stack, BOTTOM FEEDERS (36A: Opportunists, even more derisively) also made me smile because I associate it with an incredible lyric from “WAP” which I do not think I can write here AND Cardi B’s iconic tweet (NSFW) apologizing for said lyric. Those two entries definitely made up for the fact that CASE HISTORIES (35A: Freud’s “Dora” and “Rat Man,” for two) felt kind of blah. (I’ve never heard the term, I only know “case studies” but Google seems to think it is A Thing.)

Weak fill for me was ERI TU (7A: Classic aria from Verdi’s “Un Ballo in Maschera”). I am just not convinced that any aria is “classic” enough to go in a puzzle. Although I’m sure there will be commenters below who have never heard of “WAP” and are about to have their lives changed. It’s all about your personal frame of reference. I also didn’t finish this puzzle due to the LEHMAN/DISPENSED crossing (I had DISPERSED) and the ASSUREDLY/LOMAN crossing (I had ASSURED BY).

Lots of great fill in this puzzle: