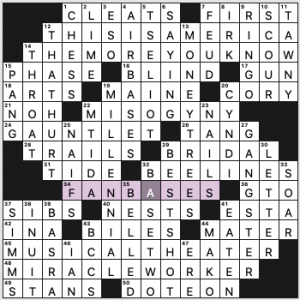 Is … is this a mini-theme, the three entries with BASE in them? AIRBASES, FAN BASES, BASE TWO? It definitely slowed me down, unable to believe a word that noticeable would be here twice—and then a third one crossing the second? I am perplexed.

It is a pretty grid, though, sort of a plump S, lots of flow, lots of long entries intersecting others. Fave fill: “THIS IS AMERICA,” THE MORE YOU KNOW, MISOGYNY, FAN BASES (like the Beyhive; nice clue, [Star clusters?]), MIRACLE WORKER, “THAT HURT,” MILLENNIAL, T.S. ELIOT, BEST SHOT, MONEY TREES (they’re real! I know it), and CYNDI Lauper. 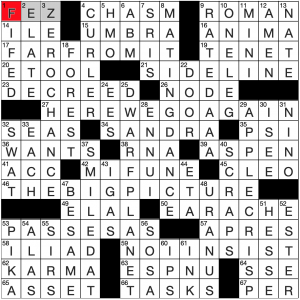 Smooth sailing today, and that is a good thing since we are out of town for a day or so. The lower left corner caused the most fits, otherwise I may have had this done in around 4 minutes. Not much time to write for long, but this was a good quick solve. I have solve a few Jamey Smith Saturday LAT puzzles at this point, so i think I have gotten a decent feel for his style. I still cannot believe that there was a time when there were NO bylines present on these types of puzzles! And I still cannot believe that in my hometown newspaper, the South Bend Tribune, that is STILL the case! Anyway, on to the comments since I am short on time. 4.5 stars for this one.

I will stop there! On to the rest of the weekend’s adventures! 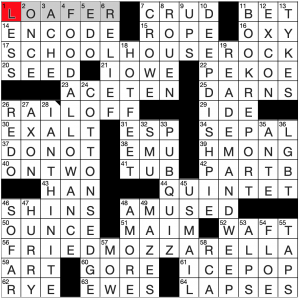 I almost got a REALLY good time on this one. I had most of the puzzle filled in pretty quickly; the west central and ENE regions gave me the most fits. And yes, there was one error in the grid. I don’t think I know 28-Down, so I suppose I learned a new word! I think I have gotten the hang of Greg’s puzzles fairly well at this point! 4.6 stars. 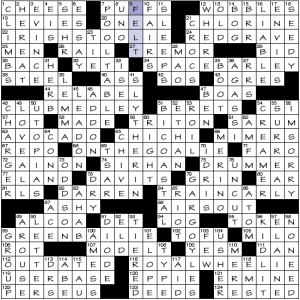 This strikes me as a treading-water type of theme. The sort of thing that is just not super-interesting but passes the time.

Again, I just wasn’t feeling this one.

Looks like a debut for Jess Shulman! So drop her a line and say “congrats”! 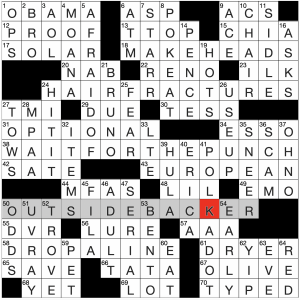 I’ve accepted that I need glasses for reading off screens, but now it’s a matter of keeping them on hand. That is to say, couldn’t find ’em, and started the puzzle reading the title as Absent Now… so I kept trying to parse the base phrases adding the word NOW. The revealer was a nice aha, and redirected me to the correct title.

Some new stuff for me in the fill included:

PENCE clued as [British coins]. You know you could’ve been a better veep when crossworld would prefer to clue you as foreign currency.

Brooke Husic’s USA Today puzzle, “So Be it” –– Nina’s writeup 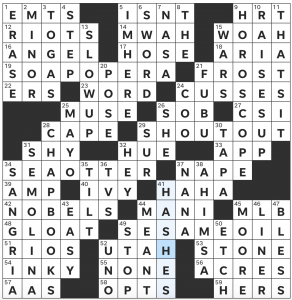 Extremely smooth fill on this puzzle. Anything that gave me pause was due to a gap in my knowledge, not faults of the answers themselves––good to see such clean gridwork.

The theme, “So Be It,” refers to the first letter of each word in the theme set answers. With 19a. SOAP OPERA, 29a. SHOUT OUT, 34a. SEA OTTER, and 49a. SESAME OIL, the initials of each two word answer make S.O. The puzzle’s title quite literally informs you that “SO” will be the theme. I’ve noticed several letter-based themes in the USA Today puzzle recently, so while this doesn’t feel as fresh, it’s still clever.

9a. [Inspiration for some before/after pictures (Abbr.)] –– Nice to see HRT in the puzzle.

40a. [Poison ___] –– Missed opportunity to clue this as the DC Comics villain, Poison IVY! Would have been fun, especially considering Batwoman’s CAPE at 28a and Valkyrie’s SWORD at 6d.

9d. [Forecast you might check daily] –– Rather than the weather, your HOROSCOPE may very well be the most important variable to check before leaving the house.

31d. [Couscous flour] –– I mostly associate SEMOLINA with Italian pastas, but today I learned that it’s used for couscous as well. Nice bit of trivia!

44d. [Chopped potato dishes] –– The vowel combos here created the perfect storm for me to fill this as LATKES instead of HASHES. Apparently my brain is already in Hannukah mode.

46d. [Word after “lip” or “panty”] –– Quite cheeky to put “lip” right next to “panty” in this clue. Made me chuckle. I did initially read it as “pantry,” though, and I spent a little while wondering what a pantry LINER could possibly be.