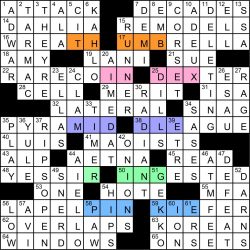 Good day, everyone! Hope everyone had a good weekend and a good start to this week so far!

Today’s grid theme made me think about people who I know who have had parts of their fingers severed, which is a number that I know for sure is more than three. (One includes NFL Hall of Famer, Ronnie Lott, whom I met a couple of times during football functions. His finger detachment came during a football game. Eek!) Anyways, circled letters in the grid are separated by a black square, and the letters in the circles, when combined, form the word of one of the five fingers.

Very nice touch with the adjoining entries of YULE (36D: [Christmas time]) and RIPS OPEN, with the nice visual of kids opening up presents during the holidays (37D: [Eagerly unwraps]). There have been a few puzzles over the years that have referenced/had “à la carte” as fill or in clues, but, at least for me, seeing HÔTE was completely new and welcomed, even if it doesn’t really stand out amongst the rest of the fill (54A: [Table d’___ (restaurant offering)]). Then there’s À DEUX to complete the French dining set in the grid (10D: [For two, in Toulouse]). Initially put DeVito instead of AIELLO, stupidly, even though I’ve seen the movie referenced at least three times before (44D: [Danny of “Moonstruck”]). Grid theme allowed for a lot of medium-to-longer-length fill surrounding a number of the theme entries, which was a lovely sight. The sight(s) in the video embedded at the end of the next graph may not be so lovely…but definitely provocative and, hopefully, somewhat funny.

“Sports will make you smarter” moment of the day: LOW (56D: [Stovetop setting]) – Here is hoping you don’t mind me cheating and adding an umlaut to an entry, for purposes of talking about one of the best managers ever in international soccer. Former Germany men’s soccer team manager Joachim Löw just ended his 15-year reign in charge of Die Mannschaft at the end of the Euro 2020 tournament that was contested this summer. Löw led Germany to the 2014 FIFA World Cup title in Brazil as well as the 2017 FIFA Confederations Cup trophy contested in Russia. In continental competition, he led Germany to the Euro 2008 final when they lost to Spain. As great as he was as a manager, he’ll be remembered by many for his numerous pitch side, uh, tics. 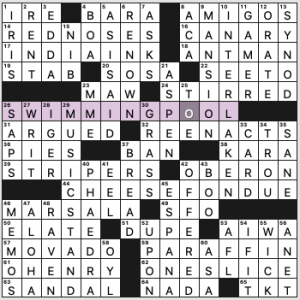 What’s your favorite dip? I’m torn between hummus, French onion dip, and this roasted salsa from a Mexican restaurant that closed down. The theme here is things that are dipped in other things, and the dippers are short Downs that cross the long Acrosses:

There were a few bits that seem out of place in a Tuesday puzzle. Theda BARA. That [Classic Icelandic saga] of crosswordese, EDDA. I guess it’s just those two, but they were both in the opening section near the first themer, and it’s awfully hard to hide the crosswordese in that corner. Kinda primes the solver to be expecting dusty old fill everywhere, whether or not there’s more. 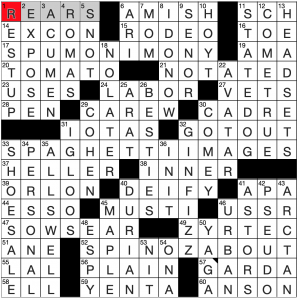 Who knew this sound was so popular?

We are adding the schwa sound “spa” to the phrases “Mony Mony” (song by Billy Idol, among others), Getty Images and knows about. Very clever. I still wonder how Matt comes up with these themes. Speaking of Matt, check out his new website, and order those No Holds Barred puzzles if you don’t own them already! Another great puzzle, Matt! 4.3 stars from me. 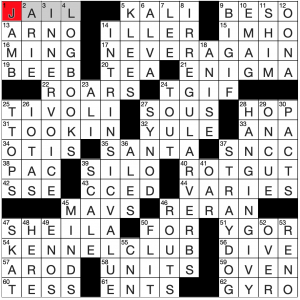 We have a puzzle with down theme entries, and the reason is made clear by the revealer at 28-Down:

I had the I.V. part figured out early, but there was still an “a-ha!” moment when the revealer was solved. Yes, we literally have “hanging” I.V. answers at the first three long themers. Very nicely done, Ed! 4.3 stars from me.

THEME: The ends of common phrases sound like pluralized letters, and are represented by such. 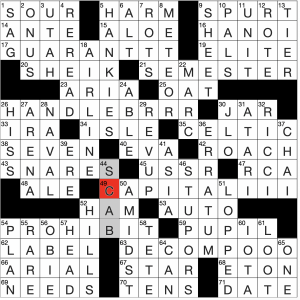 Most of the time (I think anyway), I try to look at Universal from a novice solver’s perspective. Would someone who doesn’t solve often be able to A) get through it without getting too frustrated due to foreign crosswordese B) easily understand and enjoy the theme. I had fingers crossed opening today’s that it would hit those marks as I had my friend Olivia step in for me to solve. We’re doing a couple little cycle tours in Massachusetts together right now (she’s polite enough to wait for me as I am significantly slower).

She got through it with hardly any hiccups, balking occasionally at things like RICCI (“1991? I wasn’t born yet!”) and… ya’ know… those HISSing audiences… and are LABELs synonymous with “strips”? But nothing that wasn’t fun to uncover at all. Really a testament to how well constructed this is. Fun, clever, accessible theme with barely a drop of crosswordese.

I said I had to write a quick blog post when I was done.

She said “Then can we do another?”

That’s what crosswords are supposed to do.

Theme: Getting from the airport and to the open skies. 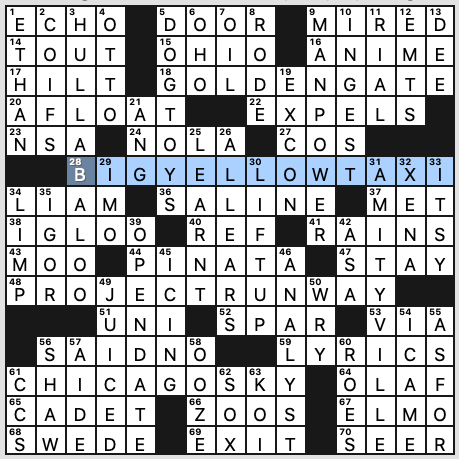 Despite my nit noted above, I quite like this. There’s a logical progression, all the words have their meanings changed from the original, and all the entries are well-known, fun phrases. I especially love the symmetrical pairing of BIG YELLOW TAXI and PROJECT RUNWAY. What a lovely find.

And who doesn’t love the classic Joni Mitchell song which has been covered so many times over the years? I’m happy to see it featured here.

Not so keen on: COS as an abbreviation for “companies” [There are 30 in the Dow: Abbr.]. I realize whoever wrote the clue was looking for a different angle (haha) than the usual cosine clue, but a plural abbreviation is just no fun.

On the whole, clues felt thornier than I expected for an early-in-the-week grid. I noted these: 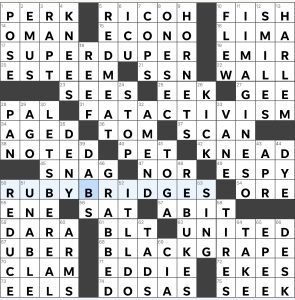 Theme: The first word of the themers can be combined with “Tuesday” to create famous ones

Being a Tuesday, I was debating whether or not the title was a hint today, or even untitled. On any other day of the week, it’d be more obvious that it must be a hint so it works well since it is subtle. With the themers, there are four famous Tuesdays: SUPER Tuesday, FAT Tuesday, RUBY Tuesday, and BLACK Tuesday. Three are calendar days while RUBY Tuesday is a Rolling Stones song as well as a restaurant named after it. The theme was one that I had to think through today after the solve, as it didn’t click during it, given the seemingly generic looking title.

A solid Tuesday puzzle for sure! The fill was good though DABS, ABIT, and TADS felt too similar and were clustered fairly close together for me. Overall it was a fun solve with a clever title for today of all days.