This week we’re told: The answer to this week’s contest crossword is a five-letter adjective. There were five (apparent) horizontal theme entries, including the central across entry:

I had the right idea immediately: form DIAMONDs on the grid that encased five letters. The piece I was missing: where? I made a few attempts to draw diamonds on the grid, made no progress, and punted to the next morning. 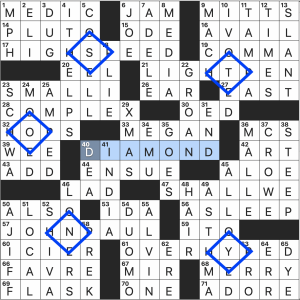 My brain subconsciously chews on unsolved metas (as I’m guessing yours does as well). I found the concept popping into my mind now and again, which sometimes yields an “aha” moment in the shower or while sipping coffee. In this case, all signs indicated that I had the right rabbit hole, and simply needed to pursue it further. I re-scanned the grid and noticed the letters HOPE arranged in a diamond around HIGHSPEED (anchored by the letters “H” and “P”). The same was true for the other themers, but not DIAMOND. The encased letters spelled ST.NY, so I clearly needed an “O”. I found the missing letter in HOPS, forming STONY, our meta solution.

I thought it was a well-constructed meta with a 100% click. I suppose one could quibble that the “O” wasn’t symmetric, but that would have kicked DIAMOND out of the center entry, so I understand Matt’s construction decision. We’ll close with this fun acoustic cover of Paul Simon‘s Diamonds on the Soles of Her Shoes by Joshua Lee Turner, Gordon Neidlinger, Jake Howard, Grant Flick, Wilhelmina Frankzerda, Sam Armstrong-Zickefoose, and Mike Gaisbacher.