Theme: Familiar phrases whose last word can (maybe) be a synonym of “show” are re-imagined and clued with crossword wackiness. 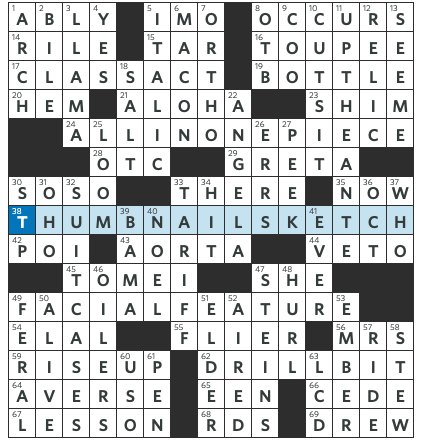 Um, well, no. The only one of these words which I would consider a synonym of “show” is “feature.” The rest—act, piece, sketch, bit—are parts of shows. If you weren’t trying to sell me so hard on these being synonyms of “show,” I would have liked it fine. But as it is, no. Maybe use “routine” or “scene” instead of “show.”

UP THE ANTE is a great piece of fill. I tried SUIT COATS for 32d [Items on carousels] thinking of dry cleaners for some reason. But I like the correct answer, SUITCASES, much better.

Hey, whaddya know! OTB (off-track betting) and OTC (over the counter) in the same grid.

I just don’t get this puzzle’s insistence on equating “show” with the likes of “bit” and “sketch.” Otherwise it would be fine. Three stars. 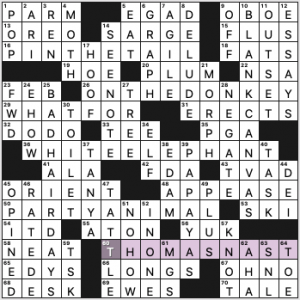 What a neat theme! It works on a couple levels: 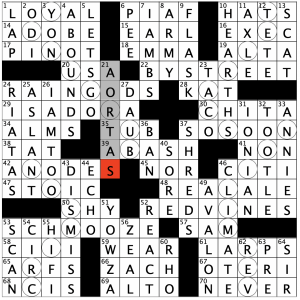 This week’s AVCX is by Juliana Tringali Golden and edited by Wyna Liu and it’s real cute, y’all.

Rather than anything using specific theme entries, “Creepy” has four series of circled squars creeping their way through each quadrant of the grid.  Looking at what these spell out from left to right and top to bottom, then looking at the revealer:

RED VINES!  I wasn’t really paying attention to what was being circled as I solved the various acrosses and downs, so realizing these were all shades of red was a great AHA, followed by figuring out what classic movie candy this tied in with.

A few other nice bits of the grid: PINOT, RAIN GODS, SO SOON?, REAL ALE, IAMBS, HEARTHS, the juxtaposition of IONIAN TOOTLES, and YOWZA 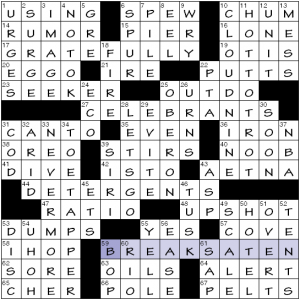 Nothing too fancy here, and it’s fairly well done.

Now, there’re only three mechanized theme entries, and one of them shares a tight etymology in its original and re-parsed forms {CELEB[rity]/CELEBRANTS}, but I don’t think it’s that big a deal.

With such minimal theme material, I’d have expected the overall fill to be stronger, yet there are a ton of shortish words here, mostly fours. Makes for a choppy solve, despite the nifty stacked nines of CLOUD NINE / HOT TO TROT and NEVERMORE / TOE-TAPPER.

Neither of the constructors have been tagged on DoaCF before, so this may be a double début crossword. We can cut a little slack, eh? 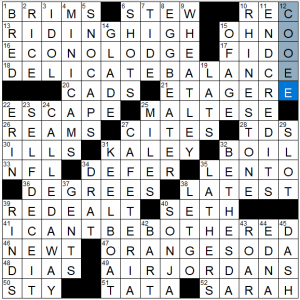 A predictably enjoyable mid-week themeless from Patrick Berry this morning, with grid-spanners DELICATE BALANCE (18a- [Harmonious state that’s hard to maintain]) and I CAN’T BE BOTHERED (41a- [“That’s for someone else to worry about”]) providing structure for 10-letter answers in each corner.

The northeast was a trouble spot for me, with new-to-me COOEE (12d- [Attention-attracting cry, in Australia]) crossing the ambiguous REC (vs “rew”) at (10a- [Button on a TiVo remote]), and the easy-to-misspell (for me at least) ETAGERE (21a- [What might hold your curiosity?]). But I also quite liked EGGBEATER, WHEATLEY, and MALTESE (clued to the language!) that bracketed that corner, as well.

Theme: “Grand Openings” – each theme answer is a two word phrase where both words start with “K”. 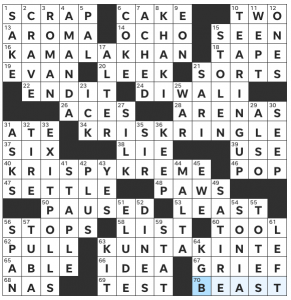 I like to play a game with myself when I solve the USA Today puzzle where I read the title and guess what the theme is going to be – does anyone else do that? Today my guess was “words that can go before ‘grand'” (which I guess would have included… mgm? I don’t know where I was going with this idea, I shouldn’t try to guess themes before 8am). Anyways, I was pleasantly surprised to see a different take on the “openings” wordplay, and I like the elegance that both words in the phrase start with K. (Side note that it’s interesting to me that both “G” and “K” can mean “thousand” in different contexts. Would this theme work with all G words?)

I have seen the names KUNTA KINTE and KAMALA KHAN before, but there was no chance I was going to remember either one without a *lot* of crosses. In particular, the bottom left corner got me more stuck than I’ve been on a USA Today puzzle for a long time – I didn’t know SONIA Gomez, so that N crossing KINTE was an educated guess. I also had trouble parsing 53a [Smallest amount] to mean LEAST (I kept wanting something like “a tad”), which kept me from seeing SATIRE for a while. I do enjoy that both KUNTA KINTE and KAMALA KHAN are from very different eras of pop culture – Roots premiered in 1977, and the Ms. Marvel miniseries will be dropping on Disney+ later this year – because it means folks are likely to have heard of at least one of them (unless you’re me, apparently! Luckily KRISPY KREME was right up my alley).

Very clean fill today, as per usual. Love TEARING UP and EXIT POLLS as bonuses. I love meta humor, so I love when clues or answers play off of each other, so I was into the 66a [“Good ___” (“Nice thinking!”)] and 67a[“Good ___” (“Jeez!”)] clue repetition. I also enjoyed PAUSED being right next to PAWS. 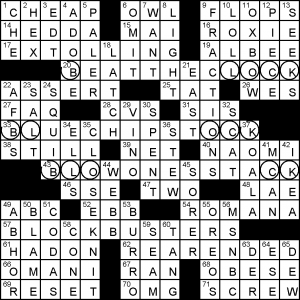 Today’s puzzle by Jerry Edelstein features a well-worn theme concept: BLOCKBUSTERS is interpreted such that each of three entries are bookended by the five letters that spell out BLOCK. They are found in BeatthecLOCK, BLuechipstOCK and BLOwonesstaCK.

As mid-week puzzles go this one leant somewhat easier, both in grid design and answers. We did have an unusual clue for LAE: [Ka __: southernmost Big Island point], which is normally Papua New Guinea’s second city in crossworld.

I was amused how [It’s not a bear] is the clue for KOALA, but EEL clues routinely enforce the idea that electric eels are eels…

[“MacArthur Park” songwriter Jimmy], WEBB is as much a singer, but generally people covered his songs and made them “big”. Here is his “The Highwaymen”: