Theme: Phrases of the form “X THE Y” are hidden in the grid thanks to a slanting THE. The revealer is THE CASCADES (63a, [Range that’s home to 18-Across, and a hint to solving this puzzle]) and should be interpreted literally to make sense of the theme, i.e. the word THE cascades down and to the right. (18a is MOUNT SHASTA [Northern California peak]), by the way.) 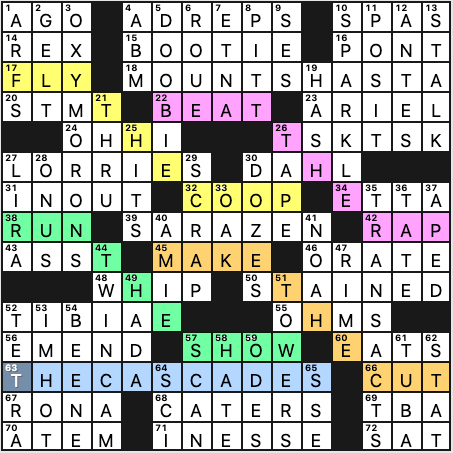 I will start off by saying, wow, this is pretty nifty. I love the consistency in the phrases and the top-notch execution. This grid is jam packed with theme material and it’s quite smooth given the constraints.

In fact, the execution was so good, I didn’t see the theme at all until minutes after solving. Obviously I knew I was missing something because the last word in each phrase has the same clue which is [CLUED ELSEWHERE]…and I couldn’t find where these clues were!

It took a few turns at reading the revealer and then thinking about the title to put things together. Finally the penny dropped and I spotted all the THEs.

My problem was that for at least two of the entries, the first word in the phrase satisfies the clue. FLY is a legitimate answer to [Escape in haste] and RUN is a legitimate answer to [Be in charge]. Granted, MAKE doesn’t satisfy [Meet requirements], but I figured I was just missing the correct interpretation of the word, and BEAT…well, let’s just say [Get off] has multiple meanings.

So in the end, I had no idea where these phrases were or even, in fact, that there were phrases in the grid. Which is a shame, because I love the theme and really wish I could have seen it during the solve. If the clues could have been a tad less ambiguous, that would’ve helped the solver out.

But today is Thursday, and this is a lovely Thursday theme.

I love this sneaky theme, but maybe it’s a little too sneaky. 4.25 stars. 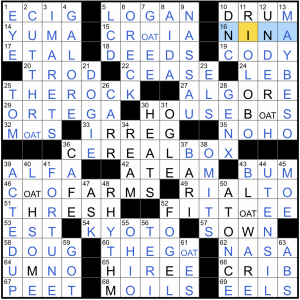 Today’s NYT is a debut NYT puzzle from Oliver Roeder!  Congrats on this, Ollie.  You may already be familiar with his work as the original writer of The Riddler column for FiveThirtyEight, covering the crossword scandal with USA Today, the ACPT, and the MIT Mystery Hunt for that same site, and he’s got an upcoming book called Seven Games: A Human History out early next year that I’m looking forward to getting my hands on.

Anyways, I was really excited to see that byline, so let’s take a look at what’s under the hood for this puzzle.  We’ve got six rebus squares hidden throughout the grid:

What do all these squares with OAT represent?  Well, they’d all be CEREAL BOXes.
(36A, “Life preserver? … or a hint to six squares in this puzzle”).  I thought this was super cute and a pleasure to solve.  Nice one, Ollie! 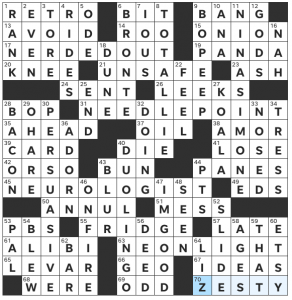 I mentioned yesterday that I like to play “guess the theme” from the USA Today title, but unlike yesterday, I was actually able to figure out today’s theme! It’s a solid one –  I really enjoy the first two theme answers and (despite knowing the theme) kept trying to make “neon sign” work for the last slot. I like the consistency of breaking up NET the same way each time (NE/T); I would guess there are a fair number of potential theme answers for this pattern so it was nice to see them in a tighter set.

Great bonuses today with NINA SIMONE, TOTAL LIE, and DUOLINGO. I liked the conversational tone this puzzle had in its clues, for example “I should have ___ that coming” for SEEN and “What’s up with ___?” for THAT. Other favorite entries today for me include the bear/”bear” pairing of PANDA and KOALA, and the whole Reading Rainbow themed corner with LEVAR Burton and PBS. 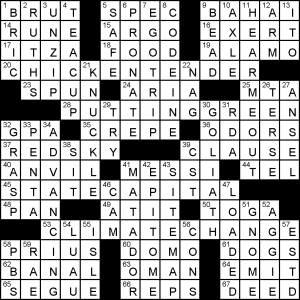 Tomas Spiers explores a well-mined theme vein in today’s LA Times theme: synonyms for money. In today’s case, the set is looser than usual: TENDER, GREEN, CAPITAL and CHANGE aren’t precise synonyms. In any case, the non-financial terms CHICKENTENDER, PUTTINGGREEN, STATECAPITAL and CLIMATECHANGE have clues that imagine that they are in fact to do with money.

There aren’t too many entries, for better or worse, that I see need to highlight. I always thought the [Cough syrup ingredient], CODEINE was heavily restricted in the U.S.? I found the clue [Structured internet listing], SITEMAP rather opaque. Just me?

Theme: Each themed answer omits an “F” as a reconfiguring of a popular phrase. 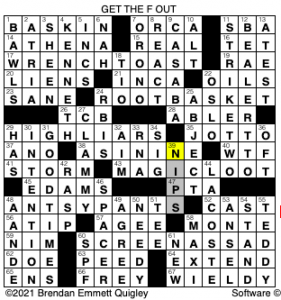 This was a fun theme, and figuring it out with WRENCH TOAST definitely helped smooth out the rest of my solve. HIGH LIARS was the most creative and most fun of the themers, and I definitely enjoyed the realization as I filled it in.

Overall, one of my favorite BEQs so far, both between the baseball references and the excellent theme. Short one from me today, but I’ll be back tomorrow with USA Today! 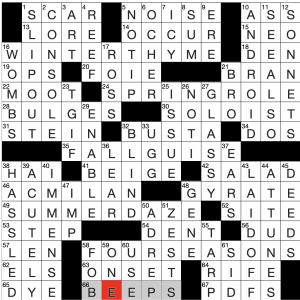 Cute, simple theme if somewhat familiar. All solid phrases though, and tightly knit. I’m not sure I understand the revealer entirely as the seasons don’t change phonetically at all, do they? I mean, I totally get what’s happening without the revealer. It just seems a bit weird in there.