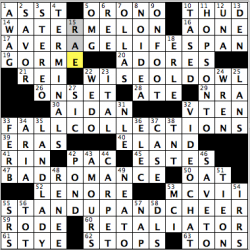 Good day, everybody! Here is hoping that your holiday on Monday went well and that you were able to enjoy the unofficial end to the summer!

Today’s theme is all those wild and crazy guys…in a way. Each of the five theme entries, all going across, start with a word or words that also come before the word “guy.”

Initially put in “landlord” instead of LANDLADY, which tripped me up for a few seconds but made me glad to see the departure from the gender normative term (35D: [Rent collector]). Being a New Yorker whose been to Grand Central and Penn Station more times than I can count, love the NYC feel to TERMINALS as well (4D: [Grand Central, and the like]). Covering the US Open right now remotely (boo!), and, unfortunately, I’ve seen a number of people who are using the Zoom VIDEOCHAT to do press conferences who still forget to turn off their cameras and/or sound before embarrassing themselves on camera (32D: [Skype session]). Part of me feels bad because it is an adjustment to the new normal of being a journalist, but, got goodness sakes, it’s been over a year now! Spare us the trips to the bathroom while on your phone and signed in to a Zoom chat! For real! (Sorry for venting about things from the TMI department!) Just had to let it out before moving on!

“Sports will make you smarter” moment of the day: POND (42D: [Duck’s home]) – Given the clue, a small tidbit about a sporting group of ducks and their home. The Anaheim Ducks hockey team currently play their home games at an arena called the Honda Center, which has hosted the team’s games since their inception in 1993. Before 2006, the name of the arena was called the Arrowhead Pond, or, affectionately, “The Pond.” The “Arrowhead” came from the company that once had naming rights, Arrowhead Water. In 2007, The Pond saw the Stanley Cup for the first time as the Ducks defeated the Ottawa Senators in the Stanley Cup Final. 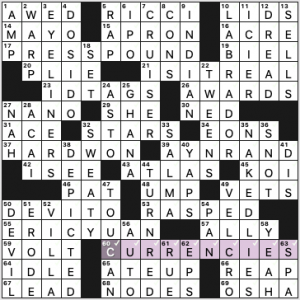 For me, the end of a weekend is usually pretty chill, since I seldom need to blog the Monday NYT and my time is my own. But this weekend included Monday, and if I’ve gotta blog a puzzle at the end of the weekend, it’s good to see Zhouqin’s name in the byline. I’m loving this theme, which absolutely eluded my notice till I reached the revealer. (Which is surprising for a Tuesday puzzle, to have a theme that’s hard to see.) 60a. [What the ends of 17-, 21-, 37-, 39- and 55-Across are] is CURRENCIES, and each unit of currency doubles as something non-financial:

I like geographic trivia sorts of things, and I like being tricked by a crossword constructor. So I appreciate this theme!

4.25 stars from me. I enjoyed the surprise of a tricky Tuesday theme.

Theme: Familiar two-word phrases are re-imagined as trade unions with the second word changing meaning to signify a group of people. The first word changes meaning as well. 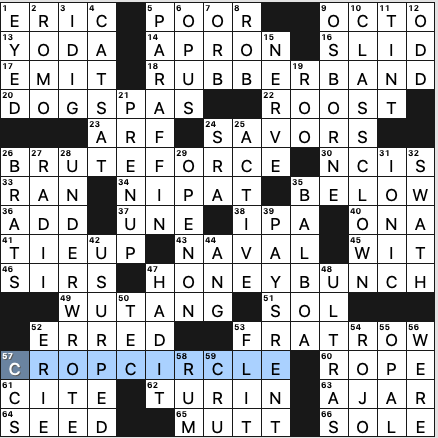 So other than the clue on the first one, this is an enjoyable set timed just a day late after Labor Day.

Fill highlights include CLASS CLOWN, PARAFFIN, FRAT ROW, BALBOA, and Joan OSBORNE. Not so keen on OPEN ON and the dreaded NIP AT. 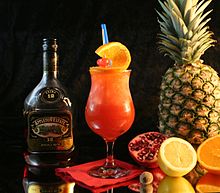 Another fun puzzle today! Lots of excellent fill and clues, including one really neat BARTRICK! 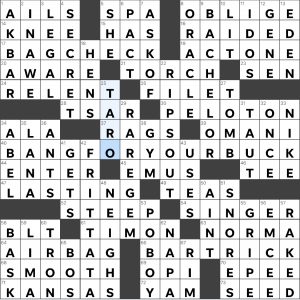 Theme: The word “back” is split within each themer. So BA starts each one and CK ends it, cutting “back” in half.

Great theme and themers today—subtle but just descriptive enough to hint at the possibilities of what to look for. Sometimes splits are in different places of the theme word but I like that in this puzzle they are all use “back” split in the middle, especially since the themers themselves are so different from each other. Who hasn’t worried about the weight during BAGCHECK before? Even when I know my luggage isn’t heavy, I always seems to hold my breath just in case, already thinking about what I could remove. BANGFORYOURBUCK is a fun themer, if for nothing else than a great deal is always the best. The one that I was least familiar with was BARTRICK but perhaps that’s just lack of knowledge on my part.

Stumpers: OBLIGE (had me thinking more “force” or “require”), KANSAS (needed all the crossings for this one), BARTRICK (tried “brewing” but it wasn’t right) and STEEP (could only come up with “hard” or “difficult”)

Shout out to all the tasty food in this grid as well—POBOY, BLT, FILET, TARO, YAM, and FRITTATA. There’s also a SEED of an avocado as well, so best to toss that out when you’re finished unless you want to try to grow a tree for yourself; it’ll take a while but in the end you’ll save money with all that you’ll grow, right? Plus, there are TEAS to go with it all and, for fun, STEEP is next it too. Good thing it’s lunch time as I post this because I’ve built up an appetite after this fantastic puzzle! 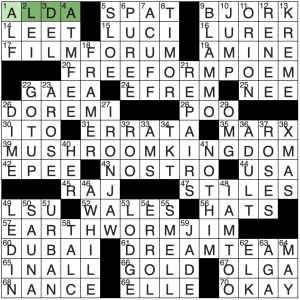 Seems like a simple enough theme, but how many more can YOU think up?

Yeah, I never would have come up with 57-Across! I still wonder how Matt’s brainstorming sessions go. Or perhaps he has the greatest searchable word list in existence! Interesting theme idea that probably haas 8 or 10 other interesting options from the alphabet. Q would likely not work; S would be too easy! 4.4 stars from me.

That is all for now! Another Jonesin’ coming next week! Enjoy some music … 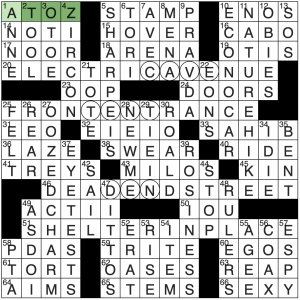 We have circles! And a very new roaring ’20s theme:

How many times have we heard THAT phrase in the last 18 months? I told you it was timely! Nice and simple, as a Tuesday should be! A solid 4.5 stars from me for a clean puzzle. 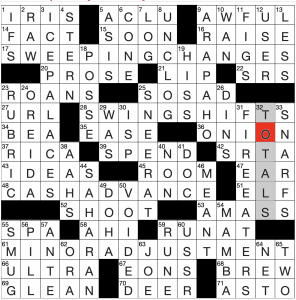 Apologies for the delay in posting. I had the day off today for the Jewish holiday, and I completely forgot it was my day to post.

Solid idea here… I think I have to adjust my explanation of the theme to note that, really, only the second word of each phrase consistently has to do with “progress.” Though the entire phrases SWEEPING CHANGES and MINOR ADJUSTMENT do. But that doesn’t work with CASH ADVANCE (but of course the ADVANCE part does). And, if I’m being honest, I’m not sure what SING SHIFTS are, thought I’ve definitely heard the term. So not sure what camp that falls into.

Love the trivia in this one:

[Fruits that Turkey produces the most of] FIGS.

Universal is good at providing quirky clues like that here and there without it being redundant.