This week we’re told: The answer to this week’s contest crossword is a 12-letter word. The three center across entries contain “clues”:

I worked on the “clues” for a while and made zero progress on the meta. Then I decided to ignore them and look for states in the grid. INDIE stood out right away, bookended by ANNA (with JAI in the middle). All of the letters for INDIANA were there, plus extras (forming the nonsense string EJAIN): INDIEJAIANNA. I poked around that rabbit hole for a while and realized “INDIE ANNA” sounded like INDIANA, and I was chasing the rabbit. Three others formed the same pattern: 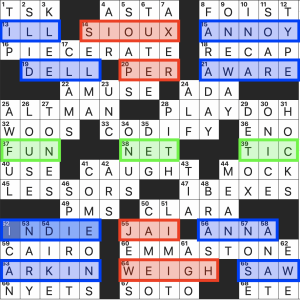 Um, wait… I seem to be forgetting something. How the heck did the “clues” apply? I circled back to those, and saw that FUN NET TIC sounded like PHONETIC when pronounced.

There is an impressive amount of meta-related content squeezed into the grid, and that final flourish could have been icing on the cake… but it came across as distracting (to me). Clues should lead to a solution, not vice-versa. Rewording those three clues to imply a post-solve confirmation (and not a pre-solve hint) would have made this meta a standout.

That being said: meta solving is a notoriously subjective endeavor. I polled a few solving pals and one solved the clues first, and two solved the meta first. Please let me know if the clues helped you find the solution, or if you solved it and went Looking for Clues.