When I solved this puzzle using the .puz version, clues after 53d were missing. We’ve seen this problem before with WSJ puzzles, and the same is true of the version on their website. No idea what causes it, but hopefully our resident .puz expert (Martin) will be able to repair it. The pdf version on the WSJ site was fine to begin with. Edited to add: Martin did manage to fix the error in .puz file. It looks like the WSJ web app version is fixed as well.

So I solved with some missing clues, but I only had to guess at one location (see below).

Theme: BLOCK LETTERS is the revealer at 67a, clued [Cursive alternative, and the starts of the starred answers, phonetically]. Those answers start with homophones of the letters in BLOCK. 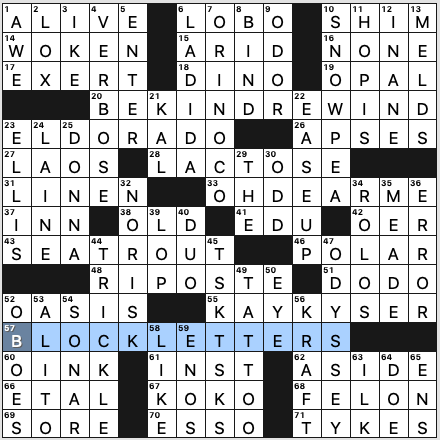 The theme works. I didn’t find it all that exciting, but it does the job.

The fill is solid as well, as you’d expect from a Stulberg grid. SNOWPEA, TRICKLE, VERBOSE, ORINOCO, and ODYSSEY anchor the different sections. RIPOSTE is a nice entry as well. Not sure I can get behind TSK TSKS [Expresses disapproval] as a verb (or a noun for that matter). 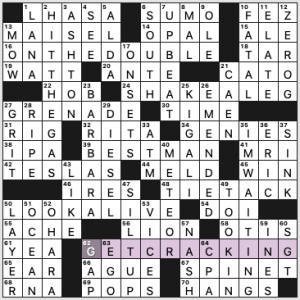 Idiomatic phrases that mean “hurry up” are clued as exhortations to people in particular lines of work (so to speak):

Theme’s kinda fun, but I didn’t love all the themers.

3.25 stars from me. Not entirely successful theme (though light and fun), and some iffy fill.

Theme:”Last Stand” – The final word of each theme answer can be a type of stand 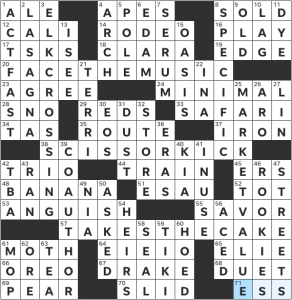 It took me a minute after finishing the puzzle to find the theme here, but I was satisfied once I did. I appreciate that all of the “stands” are actual physical things, which makes the theme a bit tighter, since otherwise there are a fair number of words that can come before “stand”. I have played soccer for years and did not immediately know SCISSOR KICK – it’s a variation of a bicycle kick, done at a different angle (although Wikipedia does say that some folks consider them the same move). There are also scissor kicks in swimming (this was the association I had) and in martial arts!

Because the grid only has three theme answers constraining it, there’s space for a lot of fun with the fill. My favorite pieces today were COAUTHOR and LASAGNA – although I liked the two longer down answers ELK CROSSING and MARKET VALUE, neither of them felt particularly special to me. I learned a lot of people through the clues for today’s puzzle: conservationist TERRI Irwin and author Lolis Eric ELIE were both new to me, and I was happy to have new clues for words that show up a lot in puzzles. I also appreciated the inclusion of ARO clued as [Experiencing little to no romantic attraction, for short] – for those unfamiliar with the term, it’s short for aromantic. 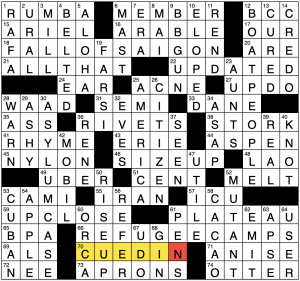 In recent years, I’ve loved seeing how the crossword can be used for more than a bit of daily entertainment, and this week’s AVCX does a lovely job of that, with guest constructor Hoang-Kim Vu memorializing an event and telling a story.  Starting with the constructor’s note, in case you passed it by:

Each passage was different. Some had mere minutes to decide what they could carry before fleeing to a USAF C-130. Some tried to escape nine times before finally making it to Malaysia, then Sweden. Some had to weigh the hard choice to leave their family behind when a single seat opened up. Some made the journey with their most valuable possessions sewn into the lining of their clothing. Some didn’t survive the journey at all. This puzzle attempts to honor those family stories by sharing them with a new audience.

Again, using the positioning of clues to represent the circuitous journey taken by refugees from the FALL OF SAIGON is a beautiful visual way to reflect this event and commemorate these stories – I wish more tribute puzzles thought this deeply about ways (other than just putting some relevant words in the grid or making an image with black squares) the event they’re commemorating could be represented, since this is really lovely. 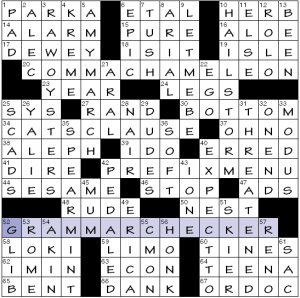 So these aren’t really things that would plausibly be emended by a GRAMMAR CHECKER, but they are puns involving elements of orthography: comma, clause, prefix. 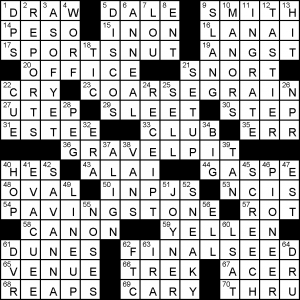 I feel that, of the five theme entries in today’s puzzle by Mark McClain, the revealer is the weakest. FINALSEED doesn’t seem like a very specific thing, but in any case, each of the other four answers end in a synonym for seed. So we have the colourful SPORTSNUT (watching Zverev vs. Harris, perhaps); more mundane COARSEGRAIN and PAVINGSTONE; and, centrally, GRAVELPIT, which is first and foremost a jam for me: 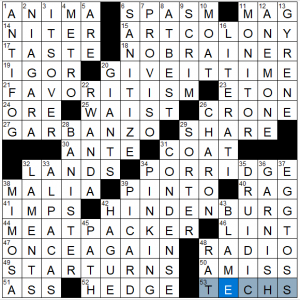 Many apologies for the late review; it just slipped my mind. The usual smoothness from Patrick, here.

Highlights (for me): GIVE IT TIME (20a- “You can’t expect results overnight), STAR TURNS (49a- Career-making performances), and EGG TOSS (37d- Messy game played at Easter festivals).

New to me: PINKING (34d- _____ shears (dressmaker’s scissors)) and GYRENE (13d – Jarhead). I can’t find much on the latter’s etymology at all, other than it was originally a pejorative reclaimed by the Marines.