Theme: DROP ME A LINE is the revealer (61a, [“Don’t forget to write,” and what you must do in 13-, 24- and 43-Across]). I wasn’t totally sure how to parse this at first. DROP MEAL IN E? DROP MEA LINE? DROP ME A-LINE? I spent a long time believing that the theme was simply “add ME” to a phrase, but there’s more to it than that. The entry above the long theme answers don’t make sense with their given clues. Putting them together, we’re to realize that ME drops from the row above and into the long theme answers. 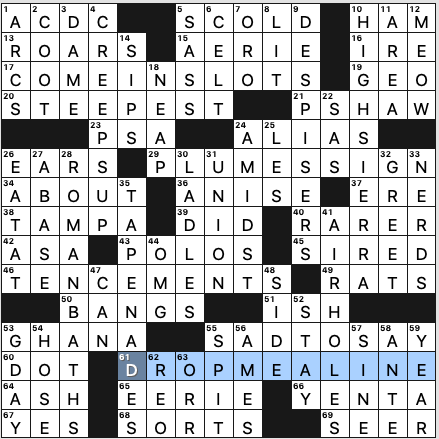 Not realizing what was going on at first, it’s safe to say I was pretty underwhelmed by the long theme answers. There have to be more interesting ME-added phrases than things like COME IN SLOTS. But once I realized the full extent of the theme (and the constraints determining where exactly the MEs came from and where they went), I came to appreciate the theme’s complexity and the difficulty in putting it together. I still don’t think TEN CEMENTS is a great theme entry, but it’s pretty cool how the ME drops from PO(ME)LOS above and into that entry.

So I was slow to catch on to the theme, but I’m glad I got there in the end. As for the rest of the grid, despite the stacked entries in the theme, we have a nice set of long Downs: CREEPS UP, HIGH SIERRA, ROMAN BATHS, TAPENADES, and AIRHOLES. Only DESPISERS feels iffy in that set. Plus there’s “SAD TO SAY…” in the Across direction.

A stealthily complex theme which took some post-solve cogitation to sort out. Four stars from ME. 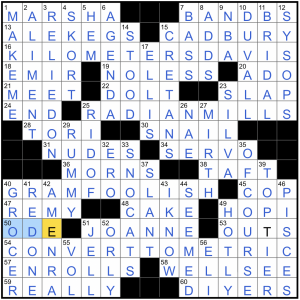 Including the conversion factors for MILES DAVIS, DEGREE MILLS, and POUND FOOLISH is a nice touch on the theme, which asks you to convert the imperial measurements to their metric counterparts.

a random assortment of other fill: Tennessee’s first female senator MARSHA Blackburn, both ALE KEGS and CAKEs can be iced for a birthday, SNAIL teeth are one of the strongest substances in the natural world, MIRTH, and Clea DUVALL, OF COURSE. 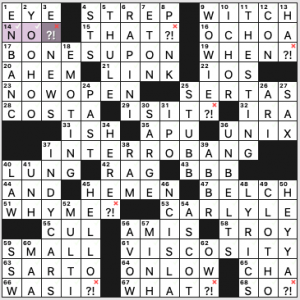 Perfect title for the puzzle. Theme revealer: 37a. [Mark called “the typographical equivalent of a grimace or a shrug of the shoulders,” in the New York Times obituary of Martin K. Speckter, its creator], INTERROBANG. That’s a question mark and exclamation point merged into one mark, and I have not seen it used as a grimace or shrug of the shoulders. Anyway, there are eight (I think) rebus squares where it’s a ? across and a ! down, so you can fill those squares with an interrobang if you’re solving on paper. I don’t know how to get an interrobang into a .puz file.

Rachel Fabi & Brooke Husic’s USA Today crossword, “No, No, and No” — Sophia’s recap

Theme:”No, No, and No” – each of the theme answers start with a contraction that means “will not”. 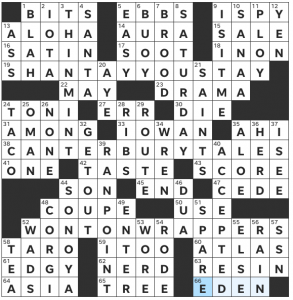 It took me forever after solving this puzzle to figure out the theme (well, ok, more like 20 minutes. But it felt like forever!) I think I had a hard time parsing it because of the change in pronunciation of “shant” and “wont” – it took actually typing out the answers for this blog to see the repetition in their meaning. I don’t watch “RuPaul’s Drag Race” so SHANTAY YOU STAY was new to me, although I have heard “Sashay Away” as the show’s send off line, so I had some clue as to the structure of the phrase. I love any food answer so WONTON WRAPPERS was right up my alley, and I was happy to learn a new fact about The CATERBURY TALES as well.

Loved the fill all around today. RAN POINT is a great in the language phrase, THIN MINTs are delicious, and I liked the Jewish representation in the clue for SATURDAY. The grid is a bit segmented but none of the sections are closed off, so they can each be full of  clean entries without disrupting the flow of the grid. I didn’t know SANAA Lathan, SONOYA Mizuno, or Brooke EDEN, but I was happy to learn about them all, and all the crosses were very fair to new solvers.

Theme: The shaded, box-shaped squares in the puzzle include the letters spelling out the name of a big box store from left to right in a box.

Theme Answers (Going clockwise from 1a) 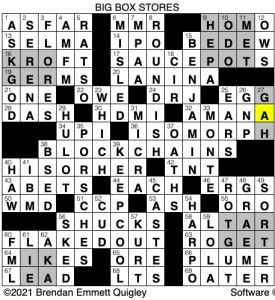 Revealer: 38a [“Systems of transactions made in cryptocurrency spread through a network and a hint to this puzzle’s theme”] BLOCK CHAINS

As always, BEQ coming in with a creative Thursday theme. At first, I had no idea, and I didn’t get the revealer until after I filled in the store names. First, I realized that the shaded letters in the upper right corner with components of 9a [“Ecce ____”], 15a [“Sparkle with morning moisture”] and 17a [“Tools to make béchamel and Bordelaise”] were only missing the E of HOME and the PO of DEPOT. Once I realized that they were store names, it was a game changer for the rest of my fill.

There were certain a few clues that elicited a solid “hmm” from me. I didn’t particularly care for 40a [“They can replace this phrase”] HIS OR HER, as I love thinking of crosswords as a place to move beyond the gender binary. I also tend to hem and HAW (40d [“Turn left”]) over the amount of name clues in a puzzle. This one had a nice range, a few like the fictional 5d [“‘Midnight Cowboy’ nickname] RATSO Rizzo, 15d [“Composer Britten”] BENJAMIN, and 29d [“Monsieur ___ (Jacques Tati role)] HULOT felt a little dated and made for especially tricky fills.

Lastly, in terms of grid shape, I thought the center of the puzzle was aesthetically kind of wonky in a way that I loved.

Other clues that caught my eye:

Overall, I thought the theme, its answers, and its revealer were awesome. As always, I struggle with older references in BEQ puzzles, but I appreciated the variety and the new terms I picked up today, from OATER to SKED.

THEME: Food/Drinks with fruits in their titles which are actually lacking said fruit as an ingredient. 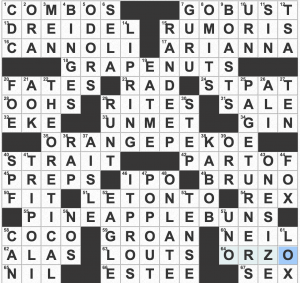 Fun grid! Left/right symmetry and looks rather themeless, doesn’t it? Actually, to me it felt themeless with a “mini-theme” if that makes any sense.

That theme, however, is strong with its three entries.  A reminder that that’s all you need!

And today’s most bizarre clue:

[Name hidden in “vegetarian nachos”]. I wonder if ARIANNA ever noticed?

So far out-there that it’s delightful. 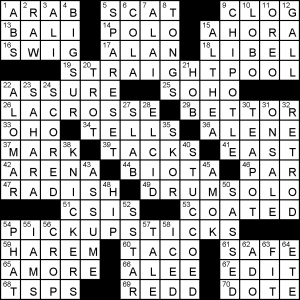 Chris Sablich’s puzzle theme today is definitely clever, and very neatly packaged. The revealing answer is PICKUPSTICKS and the other three entries – STRAIGHTPOOL, LACROSSE and a DRUMSOLO are activities that are played with sticks.