SPECIAL ZOOM EVENT ANNOUNCEMENT!: This coming Friday, September 17th, at 8:30 PM ET, Pete Muller and I will be holding a Zoom talk to celebrate 10 years of the Muller Monthly Music Meta. We will discuss the history and future of the feature, analyze a couple of favorite MMMM puzzles from the past decade, and Pete will take questions, both those sent in before the talk and from solvers who want to ask Pete a question live.

More details forthcoming from both Pete and myself this week, but mark your calendars for this Friday, Sept. 17th, 8:30-10:30 PM. Should be a lot of fun!

Now, on to this month’s meta…

Title: “Odd Men Out”
Prompt: The meta for this puzzle is an alternative rock band.
Answer: Muse 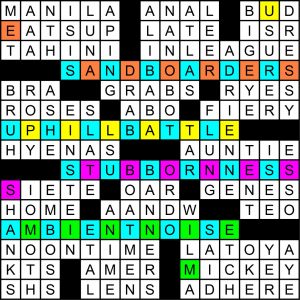 Getting late in the year and fearful of PYRMs (Perfect-Year-Ruining-Metas). This one fell quickly for me, though, so 9-for-9 now in 2021 and loving it.

Four clearly-indicated theme entries from Pete, which are:

With a cue from the title, I crossed out every other letter in the theme entries (the odd-numbered ones, of course), which left me with this:

Obviously I was quite certain this was the correct path after ADORES and PILATE were things, but then panicked suddenly when I saw TB????. But TBONES saved the day.

Now what? Scanning the grid, I saw MICKEY in the lower-right and remembered its notably dull clue [Famous Disney mouse]. Now I saw the reason for it: that clue would also work for MINNIE. Our three other extracted words can also be satisfied by other clues in the grid:

Getting closer! Let’s now arrange the four in-grid answers to those clues that satisfy our odd-lettered extracted words, using the parenthetical numbers in their clues as our guide:

At first I had mistranscribed T-bones instead of SHANKS so I had MUTE. Didn’t ring a bell but it’s an amusing alt-rock band name (as in, if they came on TV you’d want to mute them). Google didn’t turn anything up, but I soon realized by error and found contest answer MUSE. Who I have heard of, even if I don’t know their music.

Not my cup of tea, but YMMV. Estimated budget for the video: 500 quid.

Fell quickly for me, thought just 267 right answers with an hour to go so played reasonably tough. I liked the extraction mechanism, though .10 ding for MICKEY and Minnie sharing their first letter. Typically wide-open Muller grid with lots of good mid-length fill like EINSTEIN, NANOBOT, ALIBABA, MANILA, and BIGEYE.