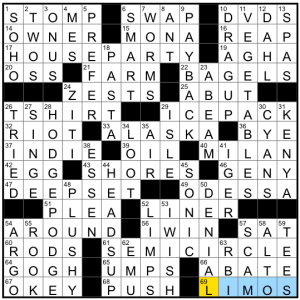 Solid Monday theme today. I enjoyed that the puns all change the meaning of the first word/part of the word along with the group at the end. ICE PACK and SEMICIRCLE were my two favorites of the group as both halves of the pun really worked for me. That said, ICE PACK and DEEP SET feel a little short as theme answers at only 7 letters each – are there any longer words/phrases that would work for this theme?

There’s a lot to like in the grid today too, especially in the down answers (the length of the themed acrosses constrains the length of the rest of the across fill, another reason longer theme answers might have been helpful here). Loved HODGEPODGE and PLUSHY and HEADS UP, as well as the double Italian food entries of PASTA and ZITI. I worry about newer solvers knowing ESSEN,  IGER, OSS, and AGHA (especially when the last one crosses DAHL) even though I personally have seen them in puzzles many times, and CYANS is a somewhat odd plural. But overall, a smooth grid for a simple, amusing theme, and that’s all I’m looking for on a Monday. 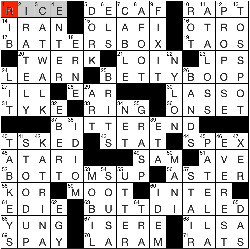 Here we have a theme of the sort that I think was more common 10 to 15 years ago: No revealer, and the themers are connected by the fact that the first three letters of each answer are the same except for a vowel change. A, E, I, O, and U are used in order:

I’m gonna say the theme is less than the sum of its parts here. There are some individually fun answers here — BATTER’S BOX is evocative, BOTTOMS UP makes me want a cocktail, and that clue for BUTT-DIALED is genius. That being said, when I’ve seen themes like this before, the word in which the vowel is changing is the same complete word each time, not part of a word (BAT, BET, BIT, BOT, and BUT would have worked, if there’s a set of phrases that start with those words that lead to a symmetric grid). I think it’s a bit harder to the solver to figure out what’s going on when you’re changing a syllable instead of a word. (My sub-2-minute solving time is in large part due to my having solved this mostly with the Down clues, and not paying attention to the theme at all until after the fact!)

With the fill — I can count the clunkers on one hand, but they are real clunkers for a Monday. EGY, ISERE, and especially OLAF I (we’re asking solvers to care about someone who was king of Norway for five years more than a thousand years ago?). I also could’ve done without the reference to Hurricane KATRINA; I imagine there are people, even 16 years later, for whom that’s a painful reference. I would’ve gone with KATRINA and the Waves (the “Walking on Sunshine” band), even on a Monday.

Theme: Various terms for horses are identified in familiar phrases. 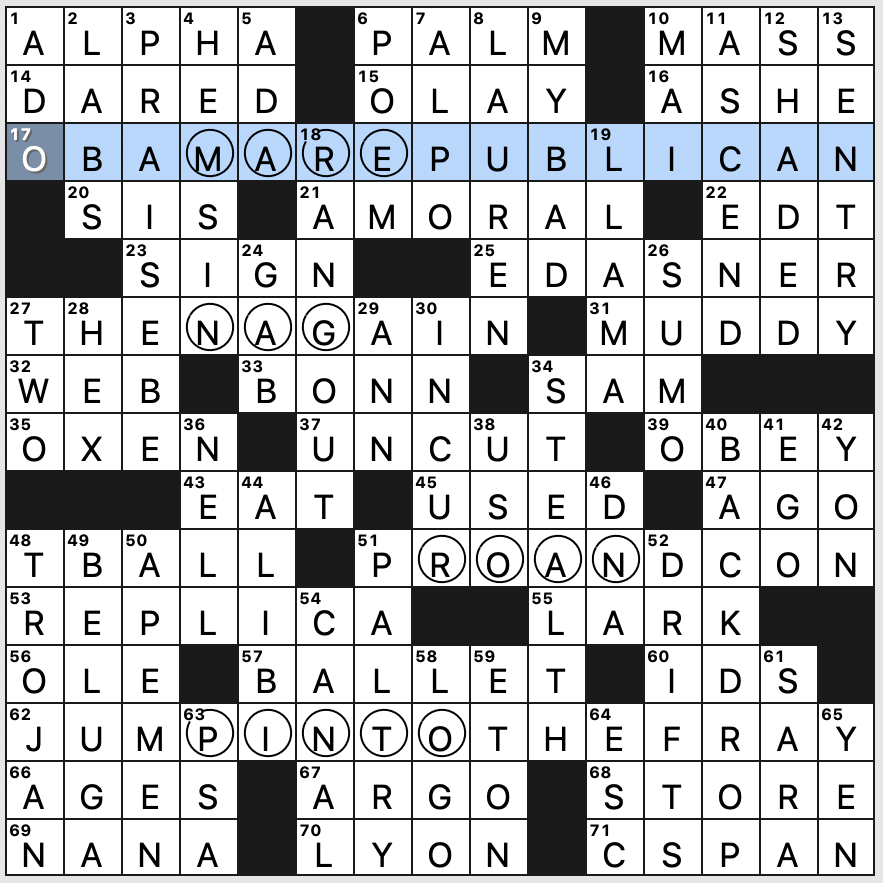 Pretty straightforward, but Lynn Lempel’s a pro at making a Monday puzzle feel fresh and fun, and this one is. This would be a great grid for new solvers to cut their teeth on.

As you’d expect, the fill is free from kludge and has a few sparkly bits worth highlighting: “PRAISE BE!” and BACKDROP most notably.

One clue of note: 70a. [City located where the Saône and Rhône meet]. LYON. Pretty tough clue for a Monday, don’t ya think?

Other than that clue, an easy, breezy Monday grid. 3.8 stars. 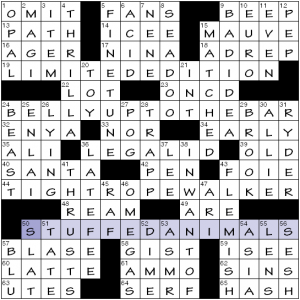 So. Two of the three are four letters long and divided evenly in two, while the third is five with an uneven 3-2 split. However, “lions and tigers and bears (oh my!)” is a very famous trio from an exclamation in the 1939 film of The Wizard of Oz. Yet there’s no explicit connection made here, no OH MY as a bonus entry, no framing in the revealer, nor is the sequence intact. Maybe it’s just my own experience, but the end result is that it had me just a bit off-balance. 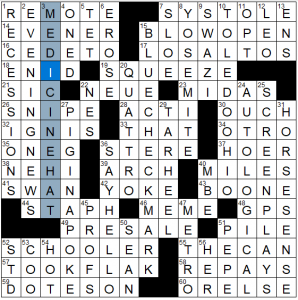 Ooo-eee, look at all these long downs! I worked clockwise around this grid, starting with SYSTOLE (7a- Cardiac cycle moment when the heart muscle contracts), so I hit the toughest (for me) section in the northwest last.

I can see your reaction to this type of grid depending on how much you need the shorter stuff to supply the longer, but even so, this grid minimizes the kludgy crosswordese that we could have seen. And the payoff is rich, which a handful of trickier clues for EVENING NEWS (2d- Sources of bedtime stories?), TOLEDO OHIO (10d- Holy city?), and SCREENPLAYS (25d- They might have laugh lines) and educational (a plus for me) clue and answer pairings in MEDICINE HAT (3d- Alberta metropolis nicknamed “The Gas City”) and AUTOLOGICAL (24d- Like words describing a property they already possess (like “noun” or “pentasyllabic”)).

BLUE CHECK MARK (15d – Sign of authenticity) is a classic BEQ marquee entry. For the Twitter-less, a blue check mark is a status symbol for noteworthy folks on the platform.

Theme: The first word of each theme answer comes after “to be” in a common phrase 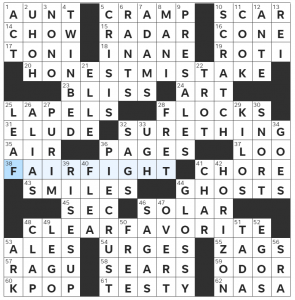 My favorite theme answer of the bunch was FAIR FIGHT for two reasons. First, it’s an awesome organization that seeks to end disenfranchisement. Second, I love when common phrases get new cluing angles when they become proper nouns. (You see this a lot with music, like SWEETENER now being an Ariana Grande album.) I think there’s something very cool about the entry itself being timeless, but the clue anchoring it to a time period.