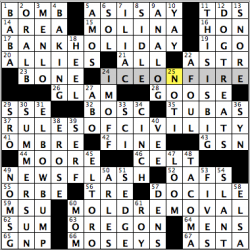 Soooooo….what did you get me for my birthday today?!? Just leave your present at the front of the door and I’ll retrieve it when I get home, OK?!

Hello there, everyone! Hope you’ve all been doing well lately! Today’s grid features five theme entries in which the first word is also a word that can successfully complete the “Break the___” phrase.

Though the circumstances are beyond unfortunate in allowing the ELBOW BUMP to become even more prevalent in greeting people in the world, I do really like the clue (31D: [Joint meeting during the pandemic?]). We got some love for the Pacific Northwest in the grid, with both TACOMA (48D: [Puget Sound port]) and OREGON making appearances, with the latter reminding me of my time in Eugene when I almost had my eardrums blown off by the deafening noise from the crowd inside of Autzen Stadium, home of the University of Oregon Ducks football team (63A: [Eugene’s place]).  I have yet to try it, but it seems like BAKING homemade eclairs is probably a whole lot harder than what the final product looks like (4D: [Making cream puffs and eclairs]). Definitely wanting a bigger challenge in the kitchen than the muffins and layer cakes that I’ve made over the years for dessert treats. I’ll let you know how that goes! Wish me luck!

“Sports will make you smarter” moment of the day: MOLINA (15A: [“Spider-Man 2” actor Alfred]) – So a number of you, mostly through crosswords, are familiar with the Alou brothers of baseball: Felipe, Jesús and Matty. In the 21st century, another trio of brothers made names for themselves in Major League Baseball, the Molina brothers. All of the brothers played catcher. The first of the three to make the majors, Bengie, is a two-time Gold Glove winner who won a World Series in 2002 with the Anaheim Angels — before the Angels re-adopted “Los Angeles” in its team name. The second, Jose, was also a member of the 2002 Angels’ championship team, along with winning a title with the New York Yankees in 2009. The youngest of the brothers, Yadier, is still an active major leaguer and, most likely, will end up in the Baseball Hall of Fame when all is said and done. As of Monday, Molina, who has played his entire career with the St. Louis Cardinals, has recorded 2,100 hits, won nine Gold Gloves, appeared in 10 All-Star Games and claimed two World Series titles (2006, 2011).

Oh, and as I’m typing this, I’m in the press box at Citi Field of the Cardinals-Mets game, with Yadier behind the plate catching. No joke! Funny how the world works sometimes!

Fun title referring to an old-timey hangover cure. But this puzzle’s not about a suspect elixir, but dog fur, specifically a LAB COAT (40a, [Wear for a chemist, or for a canine, as shown by the starts of 18-, 24-, 51- and 61-Across]). The other theme entries start with a word that can precede “Lab” to name a type of dog. 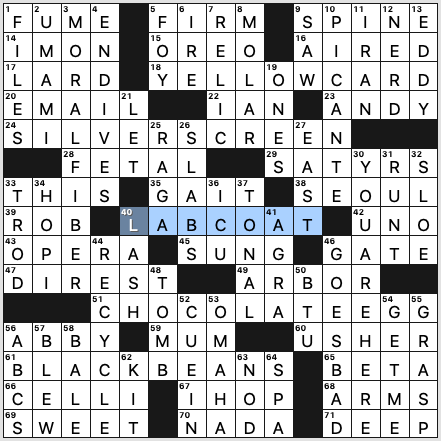 Yellow Lab, Silver Lab, Chocolate Lab, Black Lab. Fun, except I’ve never heard of a Silver Lab. Apparently it’s a diluted form of the Chocolate Lab and for that reason, not considered a purebred Labrador retriever and is therefore the subject of controversy.

But I like the wordplay in the revealer and the entries themselves make for an enjoyable set. 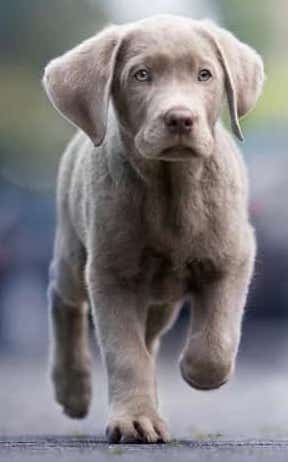 I’m loving today’s marquee fill entries, too: MORAL FIBER and YOU ARE HERE. PICANTE is a great entry as well. RECYCLE, ENDIVES, and GOES BAD round things out.

Not a fan of weird plural CELLI [Violas’ kin] especially when CELLO can take its place by turning KIT into a Keystone KOP. 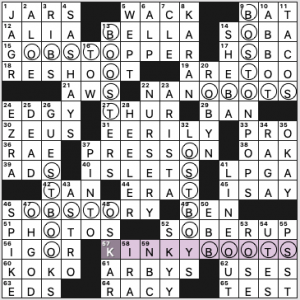 The first of the answers with the five circled letters that I completed was 13d. [Some vaccine shots], BOOSTERS, and I sort of got my hopes up that it would be (implausibly for the venue) a pro-vaccination theme. (COVID vaccine research, particularly where immunocompromised people who have reduced antibody responses is concerned, is an interest of mine this year.) That circled BOOST is also an actual word, so I thought there might be other “lift” sort of words involved. But no, the actual theme is explained by the revealer at the end, 57a. [2013 Best Musical Tony winner … with a hint to this puzzle’s theme], KINKY BOOTS. KINKY is playing the part of a cryptic crossword clue’s anagram/scrambling cue, and then BOOTS is scrambled in various (mostly non-word) ways in the other themers:

You’re on your own for figuring out if any other permutations of the letters in BOOTS in a different order can be found in a familiar words or names. Eight theme answers is more than enough, though!

Eight themers could compromise the fill in less deft hands. I wasn’t seeing much that might stymie a solving newbie. Inter ALIA, HSBC, maybe the UTES team, a singular ALP? Overall, the grid was pretty smooth, sprinkled with bits like SASHAYS, PRESS-ON nails, and some mostly up-to-date pop culture (I absolutely needed all the crossings for KOKO the 60a. [Lord High Executioner in “The Mikado”]). 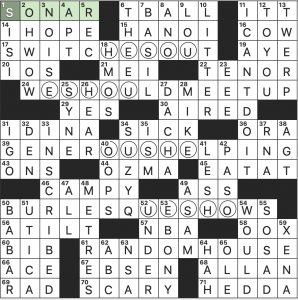 Nicely done! As is always the case with a Jonesin’, I’ll bet the brainstorming process was a lot of fun. This one seemed to play a tad easier than a typical Jonesin’, but there aren’t too many Obscure Pop References in here this time. That means there will surely be some in the next puzzle or two! Fun solve this week; 4.5 stars from me. 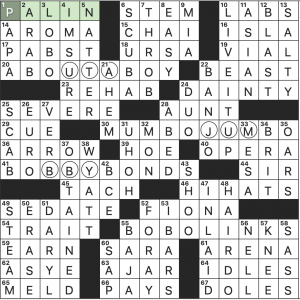 This is a slightly different use of circles, as they indicate the letters in between the BO letters, thus forming the BO-BO links. Clever! At least it is something different, which is always welcome. Nice idea, Mark! 4.7 stars.

A few notes, with a minor theme;

Today’s title hints to be on the look-out for mothers. There are lots of great references to and inclusion of women throughout the entires and clues as well, some to motherhood and others to women more generally. Girl power! 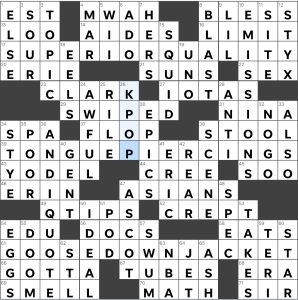 Theme: The word “mother” can precede the first word of each themer.

What a fun theme! Plus, the title is clever as a question. When “mother” is added to the first word of each themer, that gives different types of mothers: Mother SUPERIORQUALITY is a female religious role, mother TONGUEPIERCINGS is one’s native language, while Mother GOOSEDOWNJACKET tells fantastic fairy tales and nursery rhymes. I enjoyed the variety of the use of “mother” with these entries.

Stumpers: CREPT (“stealth” or “sneak” were coming to mind), LIMIT ([Restrict] made me think more of holding back, etc.), and SIR (just didn’t know)

Music entires clearly have selected my afternoon tunes for today. I now have an ear worm for Ursula’s song, having watched the original “The Little Mermaid” as well as the live made-for-tv version not too long ago (after finding the Wikipedia link, actually it was that long ago…in fall of 2019 apparently!). Also, with so many great Blackpink songs there are many excellent options for poppin’ jams. My all-time fave is still “Boombayah”, with over 1.2 billion views on YouTube and that still isn’t their most viewed music video. FYI it is a sexy music video but given that SEX [__ ed] and [Fallopian ___] TUBES are in today’s puzzle, seems only fitting.

With all of the great entires and clues in today’s puzzle, if you haven’t already, be sure to check out SALLY’S TAKE on USA Today Crossword on it, which covers them more in-depth and provides lots of great facts.