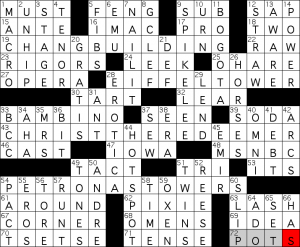 hello and welcome to episode #693 of matt gaffney’s weekly crossword contest, a guest puzzle from alex boisvert called “Picture This”. for this week 2 puzzle, the instructions tell us that the the answer is something architects need to be good at. okay. what are the theme answers? there are four “architectural marvels”:

well, the title says “picture this”, so let’s look at some pictures:

the shapes of the structures resemble the letters M, A, T, and H, so the answer is MATH. apt, since alex is himself a mathematician.

while we’re on the subject of architecture, today’s grid has unusual architecture, with non-square (17×14) dimensions and no symmetry, to accommodate the long answer CHRIST THE REDEEMER and the non-matching lengths of the theme answers. that didn’t bother me at all—there aren’t that many iconic buildings that look like letters, so you take what you can get. and it’s cool that you can spell a word with buildings, since most of them just look like the letter I.

the one thing i didn’t love about this puzzle was its resemblance to mgwcc #191, down to its reuse of the eiffel tower. but that one was almost a decade ago and i wonder if anybody but me even remembers it? this one was different enough anyway, with its architectural bent, that i still very much enjoyed it.

that’s all i’ve got this week.

This entry was posted in Contests and tagged Alex Boisvert. Bookmark the permalink.