Theme: Each 15-letter theme answer ends with a layer of the earth. 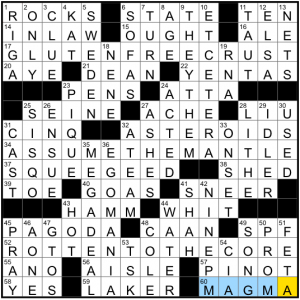 What great grid-spanning answers! I love the phrases Pao chose, and I like that they are set up in the grid in the order that they are in the earth (CRUST on top, then MANTLE then CORE). It was a satisfying theme to figure out, as once I figured out the first two theme answers I was able to drop in ROTTEN TO THE CORE without any crosses. Are 1a [What lava becomes after an eruption] ROCKS and 60a [ What lava is before an eruption] MAGMA part of the theme too? I didn’t include them in the theme section since I wasn’t sure, but I liked the first/last across answer consistency to them, and they helped set the vibe of the puzzle.

Suuuuper smooth Monday fill here – when your most questionable answer is GTOS, you’re doing something right. I love the word SQUEEGEED even though spelling it was a total guess. All of the long downs (MEGA DEAL, EGOMANIA, THEY/THEM, ET CETERA) are beautiful, and there are very few three letter answers that can make the puzzle choppy. For me, this meant that 99% of the puzzle flew by for me, and I loved it all. But then I spent literally a full minute of my solve trying to parse the WHIT/CAAN/WATER section, which I just could not see – these are all fair words, but I personally didn’t know James CAAN and couldn’t get the W for the life of me. My fault, not the puzzle’s! Overall, a fabulous NYT debut for Pao Roy, hope to see more of their work soon. 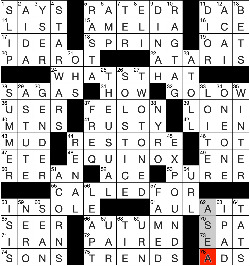 First of all, if you’re feeling like this puzzle took you a little longer than Mondays normally do, don’t blame the difficulty of the cluing first: This puzzle is taller than it is wide, at 15×16 squares.

And it’s a lovely circle of life we have going on in this one: The seasons, SPRING at 18A, SUMMER at 28D, AUTUMN at 66A, and WINTER at 35D, proceed in a counterclockwise circle along the grid. In the center you have 26D SOLSTICE [Semi-annual occurrence that begins 28- and 35-Down] crossing 48A EQUINOX [Semi-annual occurrence that begins 18- and 66-Across].

So: Nothing tricky about the theme at all; the clues explain everything. The elegance is in the execution: that the seasons are arranged symmetrically around the grid, proceeding in order, and that SOLSTICE and EQUINOX are even placed in the same orientation (Across or Down) as the seasons they refer to.

The one slight oddity is the decision to run this puzzle on September 20, not September 22, the date of the fall equinox. I guess it’s because the editors thought assigning a Monday-difficulty puzzle on Monday was more important than making the date, but I think this construction is special enough that if it had run on Wednesday, I wouldn’t have been in the least upset to have one more easy puzzle in the week than usual.

The fill is almost entirely smooth; if you’re going to have ETE on Monday, it’s quite nice that it happens to cross SUMMER, and I appreciate any reference to Tater TOTs (the most underrated carb!). YSER and TER, not so much, and they’re additional arguments to have saved this puzzle for Wednesday!

On the whole, a lovely puzzle with a very finely crafted theme.

Sadly, there’s no Cthulhu in this grid. What we do have is a vowel progression with phrases starting HxP. It’s not often you see one of these include Y as the final vowel, but this one does. 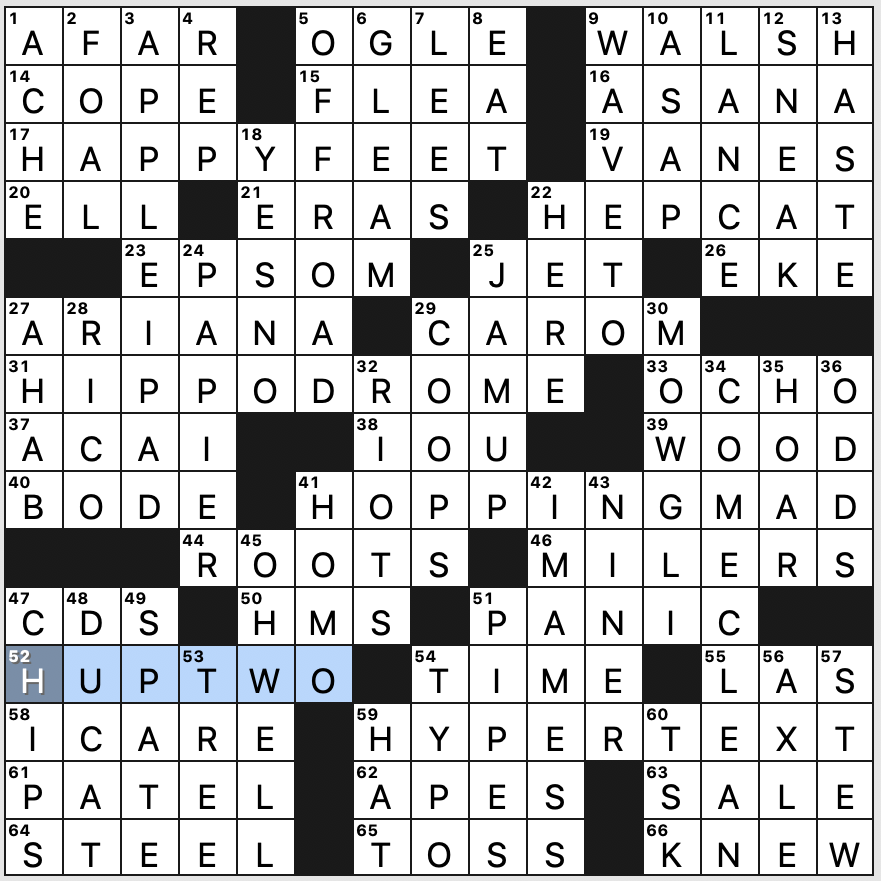 I like that our constructors give the letter Y some love in this vowel progression, and I like the title. At first I was wondering if the “craft” in the title might refer to some kind of vessel or vehicle, but I decided it refers to the fact that creating a crossword is a craft, and for many it’s a labor of love. Ergo, this puzzle is an H P Love-Craft. However, there’s just one thing…

During the solve, I had HUT TWO at 52a, and I really gave that entry the side-eye. I’m pretty sure I’ve seen HUT ONE in a grid, but HUT TWO felt like it was starting to get out of hand. But then it actually turned out to be HUP TWO which really set off the scowl-o-meter. I think it’s generally accepted that quarterbacks might (or at least used to) say “hut one,” etc., but “hup”? I contend that saying “hup” requires more facial muscles than saying “hut” and therefore it’s easier and quicker for a quarterback in a high-pressure situation to go with “hut.” I could find little evidence online of quarterbacks saying “hup.” Checking the Cruciverb database, there are seven entries for HUT ONE, three for HUT TWO, and zero for HUP {anything}. So that kinda torpedoes the whole theme.

I’m guessing the constructors really wanted to include the Y in this vowel progression and really liked the puzzle’s title. I’m good with both of those things, too, but when they force you to include a stinker of an entry like HUP TWO, that’s when I would start to consider alternatives.

I enjoyed most of this puzzle’s theme, the fill, and the clever title, but one theme entry nearly scuppered the whole thing. Three stars. 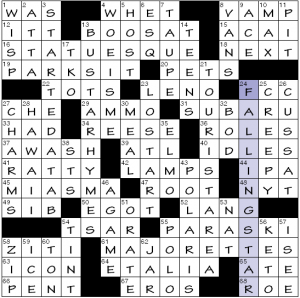 Some issues with this one, on the editorial side of things, beginning with the revealer:

Now, what’s the other part of the revealer about? Ah, I SEE (57d) now: that four-letter sequence descends from left to right, two rows per click. This includes its position in 24d, so the first appearance begins in Row 1 while the fifth and final appearance ends in Row 15. Very nice.

My other issue is that there are some clues that really should have a qualifier, as we see in 14d [Awkward years, often] TEENS. For this criticism I’m looking at 16a [Like a queen] STATUESQUE (“, perhaps“) and 20a [Parrots and ferrets] PETS (“, sometimes“).

Hey, y’all, it’s Darby covering the New Yorker for Amy. I don’t often do this puzzle, so it was nice to have the excuse. Side note: I love the fill font. 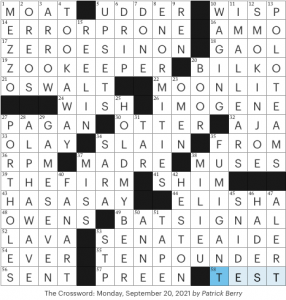 Anyway, to business, this puzzle was rated as “[a] challenging puzzle” from Patrick Berry, and I definitely agree. However, it was a really nice fill with some fun wordplay, especially in the longer answers. My favorites were 14a [“In need of checkers”] ERROR PRONE, 17a [“Gets steadily closer to”] ZEROES IN ON, and 25d [“Pre-fight announcement”] HOLD MY BEER.

There were only two three-letter answers in the puzzle, and I appreciated the way that the grid essentially had you alternate which clues led to longer answers. In the upper left, the longer answers were clued Across versus the upper right, which included longer down clues, a pattern that continued clockwise. I struggled most in the upper right corner of the puzzle. I was not familiar with Reading GAOL, the 18a-referenced “Reading ___, site of Oscar Wilde’s incarceration,” nor with 12d’s SMOKING JOE or the 1996 comedy Sgt. BILKO of 20a. Having this many names cross in one area certainly added to this puzzle’s level of difficulty.

Other clues that caught my eye included:

That’s it for today! I had a lot of fun with this puzzle and with the change of gridded scenery and hope you have a great Monday!

Turns out there’s no wifi on the Seattle-Chicago train. But I’m here for the moment. Can’t get the solution grid to upload, but I’ll 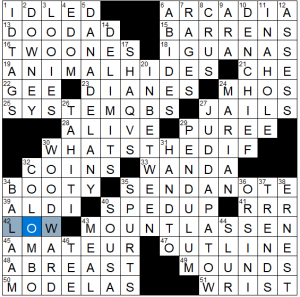 This was a toughie from BEQ! I moved fine down the west edge before getting stalled, and pretty haphazardly jumped around for that. I enjoyed most entries in here, but had a number of trouble spots. DANA DELANEY (5d- “Desperate Housewives” actress) is not one of the names I know from the show, and I never seem to remember whether it’s LOOIES or LOuIES (3d- Sarges’ superiors).

I’d’ve liked a more specific clue for SYSTEM QBS (25a- Athletes who put up extraordinary numbers due to the offense plays employed by their team regardless of their skill sets). SYSTEM QBS is by far the most common possible answer, but other football positions benefit from system offenses. Additionally, I disagree that SYSTEM QBS perform “regardless of their skill sets”. Not all systems are the same, and some prioritize different skills. And while I’m a sportshead who wants more sports in puzzles — there’s a lot more than OTT and ORR, I promise — I wasn’t thrilled that that entry crossed with SHAQVS (17d- 2009-10 reality show where a basketball superstar challenged celebrities in the field of their expertise). Shaq is pretty well-known outside of sports, but I could see it being a problem spot for many.

I weirdly had difficulty seeing WHAT’S THE DIF (30a- “Yeah, so?”), which is probably the marquee answer in the grid, though this design doesn’t lend itself to one. I’m always appreciative of clues that really match the tone of a spoken phrase, like this one does. As I look at the crossings there, I see a bunch of names and proper nouns, which could explain my jumping around: WOODWARD (30d- Redford role of 1976), JUDD APATOW (27d- “The King of Staten Island” director) and MARIAN (24d- Jazz pianist McPartland), though I knew the first two once I got enough crossings. Actually, there were a bunch of names in this grid, even by BEQ standards.

Theme: The “tail” end of each theme answer can precede the word “cat” 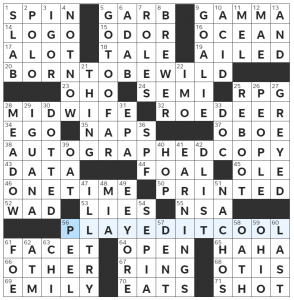 Good morning everyone! The “words can that can go before/after this other word” is a very standard USA Today theme. I think it is most successful when the title indicates the position of the words (here, “tails” indicates that it’s the final word of the phrase) and when the theme answers are colorful and fun. BORN TO BE WILD and PLAYED IT COOL were fabulous entries, AUTOGRAPHED COPY was also nice, and made me think about Aimee Lucido, a prolific constructor who recently released a new book.

When I am structuring a grid, I try to avoid 3×3 corner chunks that result in three three-letter-words in a row. But that’s just me, obviously there’s nothing wrong with it canonically. This arrangement allowed for two nice chunks of six-letter-words sandwiching the central spanner.

The entry GARB (5A: Distinctive attire) reminded me of The Met Gala, which I experienced via two punch-drunk hours of refreshing Twitter and intensely reviewing couture gowns while wearing a t-shirt I got for free at a tech conference and running shorts. Best outfit was Lil Nas X’s sparkly jumpsuit (also, yes, I did this write-up while listening to his new album), best on-theme outfit was Lupita Nyong’o’s denim gown or Quannah Chasinghorse’s dripping-with-turquoise look. Rihanna’s whole… situation was a betrayal.

I really enjoy clues like the one for LOGO (14A: Wikipedia’s is a globe made of puzzle pieces) or the one for EATS (70A: Has pad see ew, for example) which paint a picture in your head. IGUANA (29A: Lizard that can grow to be six feet long) was both a fun fact, and a little shot of nostalgia for me– it reminded me of one of my favorite series, the Hank Zipzer books. The main character’s younger sister has a pet iguana.