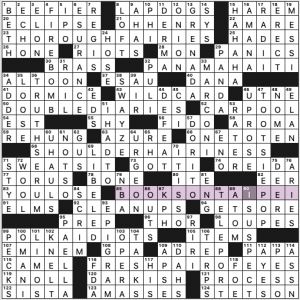 Neat theme here. The revealer is 116a. [New look provider … or a homophonic hint to this puzzle’s theme], FRESH PAIR OF EYES, and each themer is made by adding two letter i’s to the last word of familiar phrases:

Works for me, for the most part.

THEME: Sports teams can be found at the beginning of common phrases, clued wackily in an aspiring sort of way. 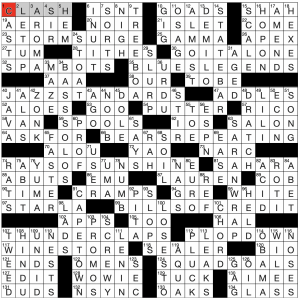 The WaPo elevator has returned to the ground floor after last week’s mind-bender (I wouldn’t mind seeing a couple of the angry emails Evan inevitably received for that one), and is back to being accessible for all solvers. Everyone can enjoy this one… even me, who knows impressively little when it comes to sports teams (STORM and THUNDER both new for me in this one. Last time I admitted that I didn’t know something about sports that most people should know, a troll was born to chide me for my ignorance. There’s a troll for everything I suppose. Go figure).

I *think* I’m interpreting the sorta-kinda revealer SQUAD GOALS correctly. All of the clues have positive takeaways for the team, so they are GOALS or sorts. Seems a bit loose, and my apologies if I’m articulating that incorrectly, but that’s what I’m sensing.

Theme: FALL COLORS (118a, [Autumn tones, and a hint to the words that drop down within the starred clues’ answers]) appear in the circled letters and they “fall” from the starred clues’ entries. I love how this revealer meshes so well with the title. 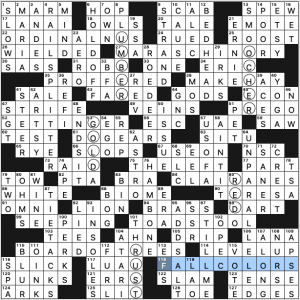 This works really well, and Paul handles it masterfully. All the phrases are familiar, the Downs are unrelated to the colors (except perhaps GOLDA), and everything is tight and consistent. This theme enforces a lot of constraints on the grid, but overall, the result is a smooth, fun solve.

I didn’t know the title of Christopher Reeve’s memoir STILL ME, but in truth, I didn’t even see the clue during the solve; I filled it in from the crossings. Same with Philip AHN of the old Kung Fu TV show. That’s some fusty crosswordese, but again, the crossings took care of it.

Impressively constructed puzzle all around with a timely theme and lovely fill. Four stars. 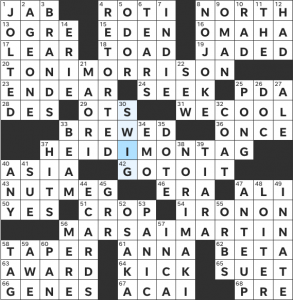 Sally Hoelscher, who also blogs this puzzle and does a great breakdown, pointed out that the I of “I’M” is the last letter of TONI, HEIDI, and MARSAI’s names while M is the first of their last names, which I think adds a nice touch to the theme. I struggled for awhile in figuring out the theme more generally because I thought I would find I’M IN in each answer because of the puzzle’s title. I think it was the “I’m All In” that threw me off.

This puzzle took me nearly 2 minutes longer than my usual solve time. I thought that 8a [“What ‘Bei’ in ‘Beijing’”] was particularly tricky, eventually filling NORTH in on the crosses. It was a great clue though, and I found myself really looking forward to getting the answer. I felt similarly about 65a [“Fat in bird feeders”] SUET, another unfamiliar term.

That’s all from me. Have a great week, y’all! 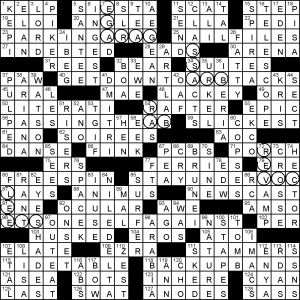 Paul Coulter’s Sunday puzzle is a tad quirky. When I got to the second revealer, BACKUPBANDS, I was hoping the circled squares would spell actual bands. Instead, they spell out words that spell out words that fit the pattern “___ BAND”. That makes a tighter set, but a little drier for me. The gimmick itself is fine, though the first one, GARAGE, had me a little confused due it being an almost palindrome.

There were several unusually elegant (though seemingly obvious) clues today: