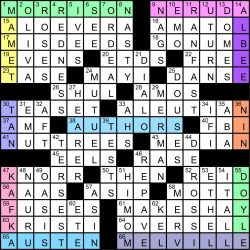 Good day everybody! Hope all is well and that you’ve got in all of your summer plans before the calendar officially turns to autumn!

Maybe some of those summer plans involved a lot of reading, and, quite possibly, at least one of those books might have been penned by the AUTHORS who are featured as answers in all of the entries on the perimeter of the grid (38A: [Storytellers who appear at this puzzle’s perimeter]).

Here is hoping that your Yiddish and/or your betting skills were on point, because the SHUL (26A: [Synagogue]) intersection with MUTUEL could be a brutal one for some solvers (24D: [Pari-___]). How many other people reminisced about the days of having to DIAL 0 and operators connecting wires on switchboards (21D: [Connect with an operator, on an old phone])? I’m sure some younger people will GO NUMB learning about connections made via the rotary and touchtone phones of yesteryear (18A: [Lose all feeling]). We have some eight-letter stacks in the northwest and southeast corners, with MISDEEDS (17A: [Transgressions]) and OVERSELL being the standouts for me in those areas (64A: [Promise too much]).  Oh, and anyone else get a kick out of seeing both ROSES (3D: [Garden favorites]) and MERMAN in the same grid (29D: [Fabled sea creature])?

“Sports will make you smarter” moment of the day: OLIVA (2D: [Three-time A.L. batting champ Tony]) – Outside of those players banned from baseball for life, one can argue that the best Major League player not to be inducted into the Hall of Fame is one of the great Latin players ever, outfielder and designated hitter Tony Oliva, who spent all of his 15 seasons with the Minnesota Twins. In his rookie year of 1964, Oliva, who was born and raised in Cuba, became the first player to win the Rookie of the Year Award and the American League batting title, hitting .323. In an era (1960s) dominated by pitching, Oliva led the American League in hits five times along with making the All-Star Game on eight occasions. Because of severe knee injuries that shortened the prime of his career, Oliva spent the last four years of his career as a designated hitter. In 2015, Oliva missed being enshrined into the National Baseball Hall of Fame by a single vote by the Golden Era Committee, which appeared to be his last chance to ever make the Hall. The Golden Era Committee has been since replaced by the Golden Days Committee, and it is rescheduled to vote for the first time in December of this year. Hopefully, the members will get it right and put Oliva where he belongs: Cooperstown. 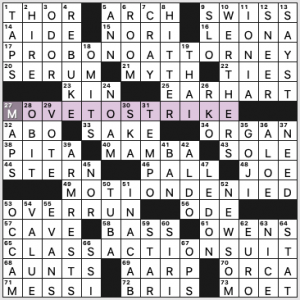 It’s been a long week, my friends, and it is only Monday night. So quick recap!

Theme is legal phrases clued as if they’re something else:

Theme is decent, a fresh angle. Fill is pretty solid. I live on WERTHER’S Original zuckerfrei caramel hard candies. Fave clue was 3d. [Musk, e.g.] because Elon Musk has been in the news this week, I don’t like him, and the answer was ODOR. Made me laugh.

Four stars from me, over and out. I think the puzzle’s a debut—congrats to you, Daniel!

Theme: Nifty double theme in which we have familiar two-word phrases where the first word is a household utility and the second word is a vehicle of some sort. The revealer is the apt UTILITY VEHICLES (61a, [Purpose-built conveyances, and a hint to 17-, 23-, 37- and 55-Across]). Now, I’ll admit to not knowing exactly what a utility vehicle is defined as, so I checked the Wiki: “A utility vehicle is a vehicle, generally motorized, that is designed to carry out a specific task with more efficacy than a passenger vehicle. It sometimes refers to a truck with low sides.” Fair enough. 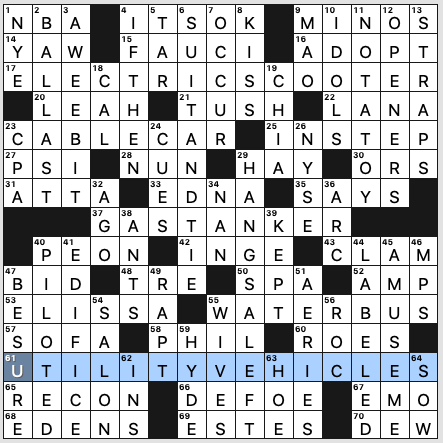 Nice, tightly-constructed theme. I wondered about whether the first words were different enough in these phrases from their use as household utilities. For example, water. Water is water, right? Well, no. Treated household water is not what you’d find in public waterways, so while the meanings are similar, there’s enough of a difference here to make the theme work.

I’m further impressed that everything fits symmetrically without having to rely on any awkward plurals (aside from the revealer, that is).

Fill highlights include SUIT AND TIE, HANGS A LEFT, a plastic bag’s warning NOT A TOY, a condescending “AMUSE ME,” and a Scottish person’s “A WEE BIT.”

Clue of note: 28a. [Wearer of a wimple]. NUN. The wimple is the headdress that some nuns wear.

Oh, and this appears to be a debut for Laurie Euler. Congrats!

THEME: Words that mean “go fast” can be read backwards in common names/phrases 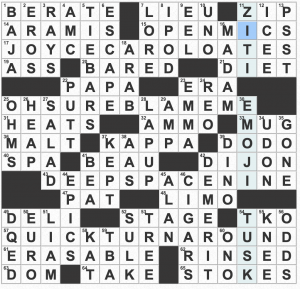 That was a terrible solve for me, which has very little to do with the construction and theme and almost everything to do with the webapp that I had to solve this on since I’m at work and Across Lite access is on a blocked site.

Before I get into that, I want to point out the things I enjoyed: There was plenty of stuff to learn and some fun facts that made me smile. ICEE has a tropical fusion flavor! Tam khanun is a SALAD! There’s a Vulcan Salute EMOJI! A DODO was last seen in 1662! OH, SURE.. BLAME ME is a fantastic entry, even if the OH part is a bit arbitrary. Awesome to see JOYCE CAROL OATES.

But the experience was very much marred by the outdated webapp. First I had to turn off the sound effects. That oddly loud and delayed click every time I type a letter is super obnoxious. Also, I never realized a click sound effect could sound dated, but this one does. It’s got a 90’s feel to it. Sounds like KUH-LICK! KUH-LICK!  And for some reason the whole puzzle reset itself when I silenced the click.

After that I took a few moments to wonder why the entire row/column is highlighted when I select one single entry (see solution grid). In other crossword apps, when more than one entry is highlighted they are usually connected somehow. Like cross-referenced or something. Here, the whole column/row is highlighted… sometimes… depending on how close the entry is to the south or east of the puzzle.

Then, of course, there’s the ongoing issue of Universal publishing themes that are far better served with circles, as this one is. Instead, I was asked to count boxes, mentally circle them, and read them backwards. That’s a lot to ask, especially of newer solvers.

Per its website… Universal claims that it “…sets the standard for all daily crosswords.” So, other publications aren’t reaching the standard when they include circled letters in the puzzle?

I don’t get it. I really don’t like comparing publications against one another, but it’s hard not to look at the (pretty darned good) webapps offered by WaPo, NYT, The New Yorker, etc. and wonder why Universal is still hanging on to this one.

3.8 stars if solved in Across Lite. 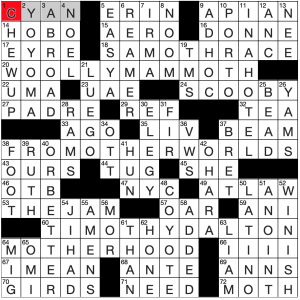 We have a theme that is the Obscure-Pop-Culture-Reference-of-the-Week! But it all ties in to the recent death of comedian Norm MacDonald, best known for his work on Saturday Night Live. We also have a revealer of sorts at 72-Across:

So we have the word MOTH hidden all over the place in various phrases. Nice enough, but you have to hear the joke! I found a version of it on YouTube that I will link below. If you haven’t heard it before, you will laugh out loud! A great way to make somewhat of a tragic event just a wee bit lighter. RIP, Norm. 4.8 stars for this one.

That is all for now! Enjoy Norm MacDonald’s moth joke! 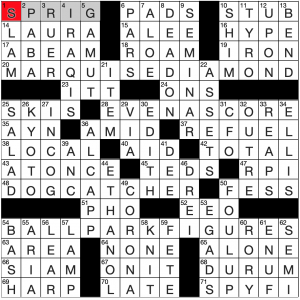 We have yet ANOTHER byline that I am unfamiliar with, yet the name is in this blog’s database. That likely means there have been other LAT puzzles by this person, and I just cannot do every one of them. But this is an interesting theme that is hard to put together until you get to the final revealer:

Nicely done! We certainly have different types of “figures”: a diamond is a shape, a score is a number, and the catcher on a baseball team is certainly a “figure” that plays! I like it. Chris, keep those puzzles coming! 4.6 stars from me.

Smooth solve today for me—and just shy of a personal record by 30 seconds. A couple of clues tripped me up but overall excellent entries, great clues, a solid theme, and intriguing grid. 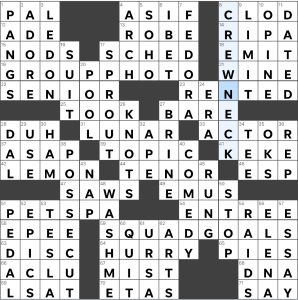 Theme: The first (or leading) word is each themer is a type of team.

At first, I only noticed the across themers and needed Sally’s insights today for the downs as well. I’ve not been solving too long so I’m used to either all acrosses or all downs for themers. Is mixing the two more common than I realize? If so, please let me know. GROUPPHOTO is a strong theme opening, though “group shot” came to mind first. References to other clues aren’t my personal fave but at least this one was for a clue prior in the puzzle (instead of after it)—SQUADGOALS as a caption for 19a makes me envision a victorious athletic team after a hard won match. CREWNECK’s clue gave me a brief pause, since I think of t-shirts first but I really enjoyed this one. POSSECUT isn’t a term that I’m firmilar with so I needed crossings for this one, though once filled in it made perfect sense.

Stumpers: KEKE (just didn’t know and even the crossing stumped me), OKS (tried “yeas” which didn’t fit or “yes”, usually I use “okays” or “ok” not “oks” so I wasn’t expecting that form), and SCHED (wanted “agenda” to work, also it’s a virtual platform I’ve used for online conferences so that’s the only context I have for this shortening of the word)

A delightful collab today! Hoping to see more from this team of Mark and Brooke!