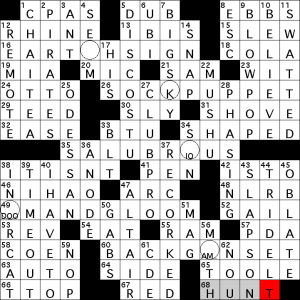 hello and welcome to episode #694 of matt gaffney’s weekly crossword contest, “CIRCLE Dances”. for this week 3 puzzle, the instructions tell us that the the answer is a five-letter word. okay. what are the theme answers? there are five circles in the grid, which need to be filled with 0, 1, 2, 3, or 4 letters to make the crossings work. in order from top to bottom:

that took a little while to unravel, since each one works a little differently, but after i got the first three, the pattern clicked into place and it wasn’t hard to guess what was happening in the last two. but now what? we have five circles, each with a different number of letters from 0 to 4, in increasing order as you go from top to bottom in the grid. the letters themselves don’t seem to spell anything: nothing, K, IO, DOO, and AMMO. nor is there anything you can replace those letters with to make the across answers into anything else resembling a word. you can with some of the downs, but IN_RCAT is not very flexible.

what about the title? i don’t really know. dances could suggest either thinking about names of dances, or just about movement and dance partners and that kind of thing. for example, switching partners around so that EART[ ]H SIGN crossed, say, S[IO]N instead of SE[ ]M.

on that note: why SEM? it’s a pretty junky abbreviation, and SE[ ]T crossing TIC would be an improvement there. i suspect there’s some meta constraint on that answer that would force it to be SE[ ]M; of course, the empty square by itself does not constrain the answer at all, in contrast to the way BACKG[AMMO]N SET and M[AMMO]TH are among the very few possible answers that include the string AMMO.

the crossing answer, EART[ ]H SIGN, is similarly unconstrained, but it definitely did not escape my notice that the empty square comes within EARTH, and the grid also contains both SHAPED and OBLATE (!), the latter clued in its non-geometric sense as {Person who has dedicated their life to serving God}. but the EARTH is, of course, SHAPED like an OBLATE spheroid, and a spheroid is circle-adjacent. not only that, but BACKGAMMON pieces are SHAPED like discs, and DISCO STU is in the grid too. hmm.

speaking of circles, why is CIRCLE in the title in all caps? i wish i knew. it suggests that CIRCLE is functioning as a crossword answer rather than in its semantic sense. i don’t necessarily want that to be true, since it would render my EARTH/SHAPED/OBLATE observation irrelevant and i don’t have much else to go on. but maybe i should give it up anyway, since obviously SALUBR[IO]US doesn’t have a shape, and neither does [DOO]M (unless you mean tolkien’s mount DOOM, which is inspired by the shape of stromboli).

one thought is to treat the circles like O’s, which is the letter they resemble. MOTH and SON are words, which is interesting; INORCAT is very much not, which is less interesting. BIG SOY is the powerful and insidious edamame lobby, i assume.

okay, so that didn’t work. but it is interesting that the letters that go in the circles include a lot of O’s. however, i don’t know at all what to do with that.

should we look at the letters around the circle, rather than the letters inside? the four letters surrounding the first circle are ETHM, which can spell THEM (or METH). but the others aren’t as interesting.

well, i dunno. going to have to call this one a failure—i don’t even have a hail mary guess. i suppose i will try CONGA since it’s a five-letter dance. i’ll be curious to know what was happening here, since i have very little idea.