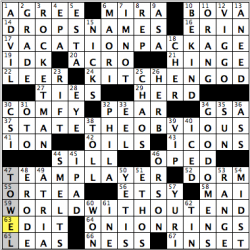 Good day everybody! Hope all is well with you and that you’re coming off a good weekend! Maybe you had a nice dream during the weekend that put you in a better mood.

If that’s not the case, then seeing some of the dream weaving done in today’s grid might put you in a good mood. The five theme entries in today’s grid all start with words that can also come after the word “dream.”

How about those non-themed 10-letter entries abutting a couple of the theme entries, DROPS NAMES (14A: [Brags about hanging out with Oprah and Gayle]) and the tasty ONION RINGS (64A: [Edible hoops])? As great as those are as fill in the grid, the latter now has my mind replaying commercials for Outback Steakhouse’s bloomin’ onion, which is a little annoying. Along with those 10s, there’s two nine-letter non-themed entries, ROCKETMAN (3D: [Elton John hit with the lyric “I miss the Earth so much, I miss my wife”]) and GOOD OMENS (34D: [Welcome signs?]), that intersect those 10-letter entries. Lots of meat on this crossword bone, and no need for onion rings to go with it…but the do, which is awesome! I love myself some TIES, but I doubt I’m going to try a cravat or ascot to go to formal occasions anytime soon (27A: [Cravats]). If anything, the open collar with a sport coat is the way to go!

“Sports will make you smarter” moment of the day: PHILA (32A: [Home to the Liberty Bell: Abbr.]) – A short entry today, and the fill made me think of one of the great feats in the history of sport: Wilt Chamberlain scoring 100 points in a single basketball game. In that game on March 2, 1962, Chamberlain poured in a cool century of points against the New York Knicks, and the picture of holding up a piece of paper with “100” written on it has become one of the most memorable pictures in sport. Oh, and the uniform is also a classic, with the abbreviation “PHILA” across the chest of the jersey. Guess teams didn’t have the money for more sewing material to put the rest of the letters of the city on the jersey, huh?!? (This is not the iconic picture, but one of the Big Dipper drinking milk out of a carton. Just as awesome of a pic, if you ask me.) 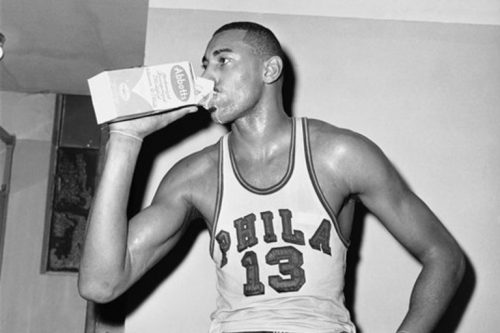 The revealer is TAKES STOCK (60a, [Assesses the situation, or what each of 17-, 26-, 37- and 50-Across does]). The other revealers are familiar phrases that can be said to “take stock” with “stock” changing meaning in each instance. 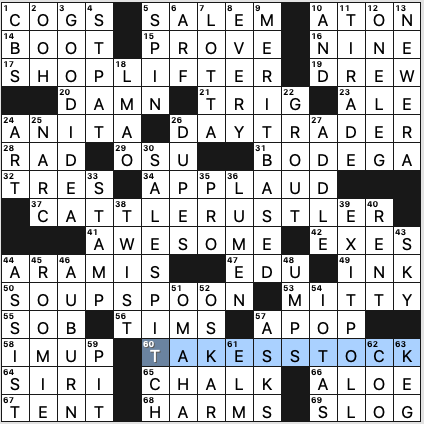 Quite an enjoyable theme. Each phrase is familiar and spot on with each change in meaning. Well, maybe SOUP SPOON isn’t quite spot on, but I’m willing to give it some leeway. I especially love that CATTLE RUSTLER clue. *chef’s kiss emoji*

MERIT-BASED and SALES PITCH are our long fill items along with “GOOD IDEA!” and EXIT POLL. They make a nice foursome. I also like BODEGA, AWESOME, and APPLAUD.

Pro tip for constructors: When given the choice, fill your grid with happier, upbeat words. Solvers are more inclined to feel positively about your puzzle than if your grid was filled with words like “boring,” “drab,” or “blah.” Funny, this puzzle ends with SLOG, but I’ll still APPLAUD the constructor. Maybe the grid isn’t AWESOME, but the theme is definitely a GOOD IDEA.

Jim P here, sitting in for Amy. It’s time to bone up on my geometry, because this grid’s got all the ANGLEs.

Our three main theme answers are familiar phrases (ish), and they each feature a word that is also a type of geometric angle. Further, stemming from those words is the word ANGLE itself, in circled letters and shooting off at an appropriate, well, ANGLE. 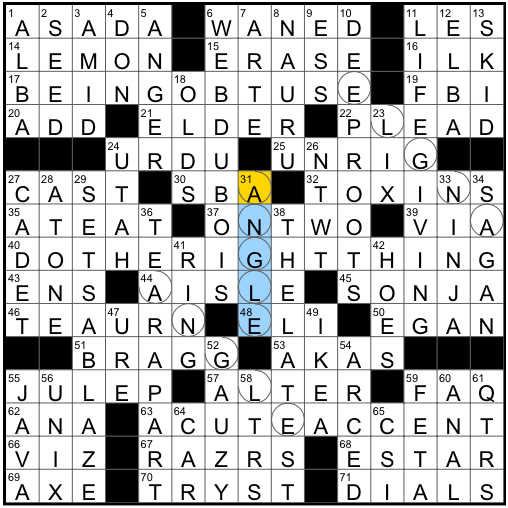 I was no math major, so I hope I’m making sense of this theme.

Really nifty theme and no small feat of construction. BEING OBTUSE isn’t such an in-the-language phrase, but it doesn’t bother me so much considering everything else that’s going on here. There are some prices to pay due to all the constraints, but I don’t recall seeing a theme like this before, so I’m loving the novelty.

We have six long non-theme entries which is pretty impressive: W.E.B. DUBOIS, DEEP ROOTS, LIFE-GIVING, SETS ABLAZE, TEAR APART, and THE LATEST. The prices I alluded to earlier include plural AKAS, ESS and ENS, LIX, and suffix URE. Not terrible, but noticeable. But again, with a novel theme and clean crossings, they don’t irk so much.

An enjoyable theme. Four stars. Congrats to our constructor on a fine debut!

And now as promised, the “obtuse” scene from The Shawshank Redemption. Note how that one word sets Andy’s life off an a whole new trajectory—or ANGLE, if you will. 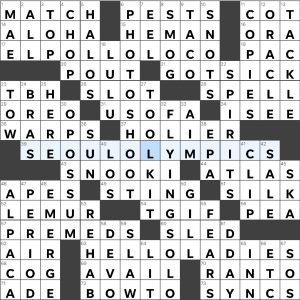 Theme: LOL (textspeak for “laugh out loud”) is found in each of the themers

What a hoot! Laughter (LOL) is at the core of each of today’s themers, with a secondary layer of shifting in placement for each one: first occurence is after five letters, second after four, and the third after three. ELPOLLOLOCO sounds delicious but I’ve not heard of it before since there aren’t any nearby; once I had a couple of letters from crossings, it was an easy enough fill though and a fun entry too not only as a phrase but also with the letter repetition! SEOULOLYMPICS was a slight stretch for me, since I wanted to put “summer” instead of the city name for the first half of this themer, although when that didn’t fit, re-reading the clue made it clear what it was meant to be. HELLOLADIES repurposes what can be a sexist phrase, based on tone and context, to a joyous celebratory greeting among friends.

Stumpers: GOTSICK (couldn’t get passed “nauseous”), SILK (“dirt” and “soil” came to mind since I was thinking of earthworms), and SPELL (needed crosses)

This puzzle has a bit of everything, include complementary entires near each other. The southwest corner has a cluster of animals, all crossing each other: OPOSSUM, APES, LEMUR, and ALPACA. EEL is on its own, though it is a sea creature and not a mammal. SPIRITS is near ORACLE in the northeast quadrant. Also, TACO crosses ELPOLLOLOCO, along with CHOP which is done to Mexican-style grilled chicken before putting it in a tortilla. Yum! 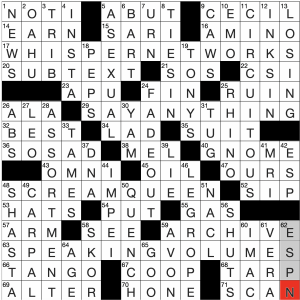 Fantastic revealer. Delightful phrases to uncover. Tight, easily comprehended theme. Can’t ask for much more than that. This was an extremely fun puzzle, I think mostly due to the liveliness of the theme answers and interpreting the phrase SPEAKING VOLUMES as adj./N.

WHISPER NETWORKS is new to me I think. Maybe I’ve heard it in passing?

I know I saw SAY ANYTHING, but I’ll be damned if I could tell you anything about that movie other than John Cusack held up a boom box outside a house at some point. I think I also confuse it with Reality Bites.

And SCREAM QUEEN is such a great entry.

I usually like when the pillar answers are in-language phrases rather than single words, but CIRCUITOUS is so funky that I rather enjoy it. 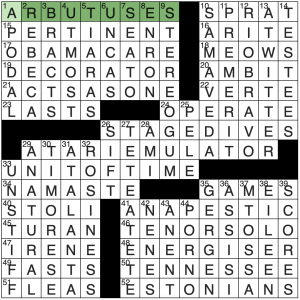 We have another themeless Jonesin’ puzzle this week, and it is a toughie! Only 58 words in this one, as the flavortext kindly states. There are some great entries in here, but most notably, there is only one 3-letter entry and just 2 that are four letters long. Ironically, nothing too overly obscure here, other than an entry or two. At least I didn’t feel like there was a bunch of esoterica as I was solving. A masterful themeless puzzle; nice job, Matt! 4.7 stars. 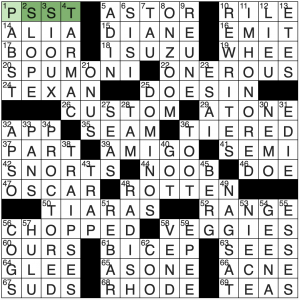 What is our theme today? You have to look carefully! Notice what the revealer says at 56- and 58-Across:

So if you look carefully at those rows mentioned, you should see hidden the words ONION, TOMATO and CARROT. Didn’t notice at all when I was solving, so a nice “a-ha!” moment. I do recognize this constructor byline, but it is not someone I am too familiar with. After going to several crossword tournaments over the last few decades, I sometimes think I know almost every constructor. But that is surely not the case! Everyone cannot always travel all across the country for these awesome weekends. I myself wasn’t able to do so for quite a while when I had small children. But I hope to meet Catherine Cetta in person someday so I can personally tell her I enjoy her puzzles! 4.5 stars from me.