This week we’re told: The answer to this week’s contest crossword is an eight-letter word describing a good contest crossword solver’s thinking. I had a solo WSJ solving streak going back to at least March when I started writing for Fiend (I didn’t track my stats before then). This one stumped me, so I got a nudge from a solving friend. I’m not bragging about my meta solving performance: I have clicked “No” on MGWCC‘s “Solo solve?” plenty of times during that stretch. The stars seemed to align for a long stretch.

I spotted the long potential theme entries (MIXEDDRINK, etc.) and stalled. I explored the following rabbit holes (not in chronological order):

The MGWCC week four released on Friday (and solving two metas simultaneously hurts my brain); I punted that for the time being. By Saturday night I was ready for a WSJ nudge, so I turned to my solving pal Gideon who provided this: “Eight across entries have an alternate answer that matches the pattern in the title.” I went back to the list of 1990s directors, saw ATTENBOROUGH, and was off to the races. The theme entries included the four long acrosses and I found four more fairly quickly: 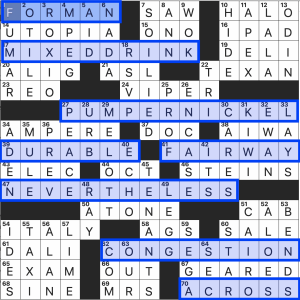 The first letter of each alternate answer spell ABSTRACT, our meta solution. Another impressive meta by Matt. One of my challenges is that my odds of solving drop considerably when I fail to identify the correct rabbit hole by the next morning. I certainly had enough of the mechanism in my notes, but didn’t pursue those far enough. The use of vague clues that lead to alternative answers is a tried-and-true mechanism. Gideon mentioned that after I found the answer: “A lesson I often forget is to chew down hard on ambiguous clues.”

I didn’t submit my answer since I got a nudge, so everyone’s odds of winning the coveted mug just increased about 0.1%. My new WSJ streak starts next week (hopefully). Solvers: let me know how you did. I’m also quite interested in the techniques you use to get unstuck when your initial rabbit holes peter out. We’ll end with the song that was running through my head all weekend: The Fabulous Thunderbirds‘ Tuff Enuff. Here’s a great cover by the Foo Fighters (featuring Jimmie Vaughan and Gary Clark Jr.):