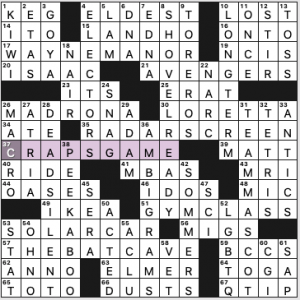 Themeless puzzles are my favorite sort of standard crosswords. I feel a little cheated when a theme or gimmick shows up! Here we have a puzzle with diagonal (SW to NE axis) symmetry, WAYNE MANOR up above, THE BATCAVE down below, and a trio of black-square zigzags meant to look like bats. (Service journalism break: If you have a close encounter with a bat, try to capture it for testing, and if you can’t, do get the vaccinations. A suburban Chicago man died recently of rabies after refusing to get the vaccinations. Horrible way to go.)

Steve Faiella’s Universal crossword, “All Over the Map”—Jim P’s review

Today’s theme is perfectly described by the title. It consists of pairs of stacked entries. The top ones contain the trigram ALL, and beneath each ALL you’ll find MAP. For the sake of brevity I won’t list all the clues, just the first one which contains the theme hint. And the second one because Radiohead. 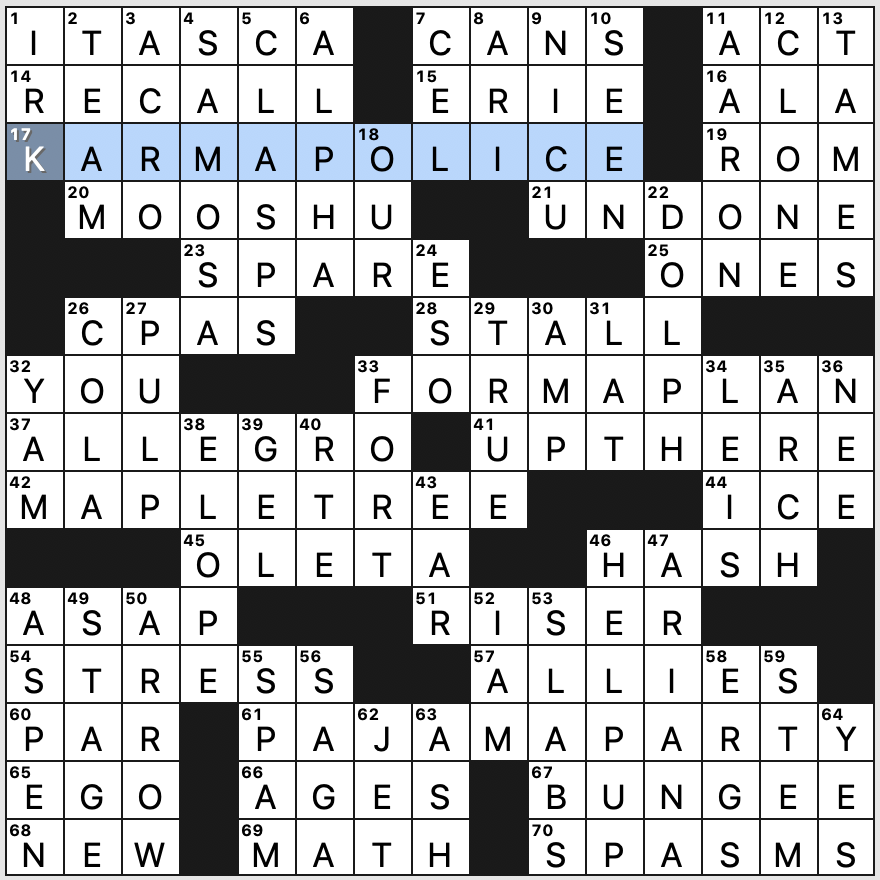 Pretty good, eh? The title didn’t register with me while I was solving, so it took me a while to spot the hidden words, but I had a nice little aha moment when I did.

Fillwise, the puzzle’s quite smooth, though it lacks anything longer than seven letters. I liked MOO SHU, BUNGEE, and NICU (my wife’s a pediatrician). I’m surprised how little we see that last one as a crossword entry. Whoa, hang on. There’s only one entry for NICU in the Cruciverb database, and that’s in Matt Jones’s indie puzzles. That surprises me. I wonder if editors have a thing against it.

Clue of note: 45a. [“Get Here” singer Adams]. OLETA. I don’t recall seeing her name before, but I did recognize the 1990 song once I heard it. She has an interesting story of how she was “discovered” by the British band Tears for Fears and then went on to achieve her own success. Here she is performing her biggest hit.

Theme: Each of the three themed answers include a magazine title as the final word of their answer. 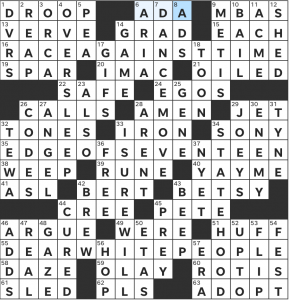 I’ll admit, I was stumped on this theme for a while, but I really enjoyed the theme answers themselves. All three span the whole grid, which is impressive, and they are so creative and fun. While difficult for me to spot, it’s still a great theme and a good use of “Side Issues” in the title to reference magazines.

Grid-wise, I love diagonal formatting with black squares. It’s so aesthetically appealing to me, so I basked in the glory of the center format here. I felt pushed the the puzzle this morning in starting off with a set of five letter answers in the top left that I felt really got my brain moving. 1a [“Sag”] DROOP and 13a [“Enthusiasm”] VERVE were great starts over in this corner. I also love that 3a’s ORCA was clued as [“Whale with the same color scheme as a crossword”]. Someone had to say it, and Brooke and Doug (edited by Amanda) did so with glee.

I also appreciated the thoughtfulness of the references to Indigenous peoples. 9d’s MÉTIS and 44a’s CREE were both clued as [“Canadian people”], and it wasn’t until later in the puzzle did I see where Brooke and Doug were going – then I was thrilled. 32d [“Pueblo people”] TEWA also certainly built on this, and this article has more information about Esther Martinez who worked to preserve the TEWA language. I do think that 34d [“Hawaii achieved it in 1959”] STATEHOOD could be controversial. I just finished a book for an Indigenous studies class that I’m taking about the history of Indigenous peoples in Hawaii (which was fascinating – it’s called The World and All the Things Upon It by David A. Chang). Hawai’i has a much more complicated relationship with the U.S. and its territory than I was aware of, so I think “achieved” in relation to America could be tricky. Overall, though, I thought that the representation here was awesome, and it was particularly timely with yesterday (September 30th) having been Orange Shirt Day, which is meant to draw attention to the injustices committed as part of the Indian Resident School system. For each of the nations mentioned in this paragraph, I included links for more information.

That’s all from me for today. If you need me, I’ll be in a RACE AGAINST TIME with reading so that I can watch Tessa Thompson movies later without feeling guilty. If you were interested in book recommendations from my Indigenous studies class, hit me up on Twitter. Thanks to Brooke and Doug for a great puzzle! 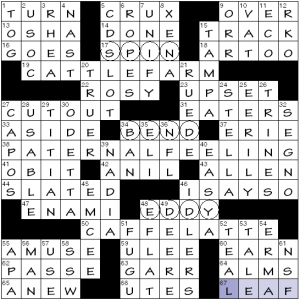 The theme is quite elaborate here. In fact, by not initially seeing the revealer in the final across slot, I had to tease out the first steps piecemeal.

Obviously I noticed the circled letters, but didn’t detect a strong correlation among them. Then I noticed that they each appeared over the same set of four letters, arranged differently, and also that that tetragram also anagrammed to LEAF. At this point I searched the grid for that word and (duh) it was in one of the customary locations: the final across entry.

The long entries containing the ‘new leaves’ are: 19a [Certain ranch] CATTLE FARM, 38a [Father’s love, say] PATERNAL FEELING, and 50a [Morning drink choice] CAFFE LATTE. Each is a unique rearrangement of the letters.

Whew! That’s a heckuva theme there. 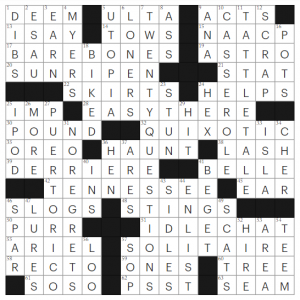