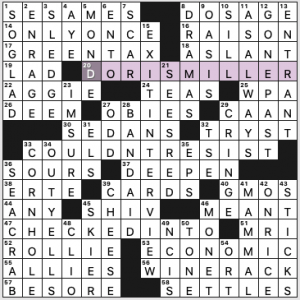 The marquée entry in this 68-worder is a name I didn’t know: 20a. [Pearl Harbor hero for whom a future U.S. aircraft carrier is scheduled to be named], DORIS MILLER. He was a Black sailor who went by Dorie and saved many lives after the attack on Pearl Harbor, despite military segregation limiting the roles he could officially fill in the Navy. Please do click over to read about him in (or listen to) this NPR story from last year. Five minutes well spent. Thanks to the constructor for bringing Miller’s story to light for the (presumably many) solvers who had missed hearing of it.

Fave fill: COULDN’T RESIST, CORNHOLE (terrible name … but some folks in the Chicago area just call this game bags, with that Northern Cities Shift in vowel sounds wherein the A in bags is pronounced with that stereotypical Chicago accent), EXIT INTERVIEW, SHIV, CRINGE with the modern clue of {[awkward]}, and AS ALWAYS.

Wasn’t wild about some of the stodgier fill here—ASLANT, plural SESAMES, OBIES, ELS, ENTO, ERTE, and … well, I can’t be mad at ORT though I recognize that it’s old crosswordese. 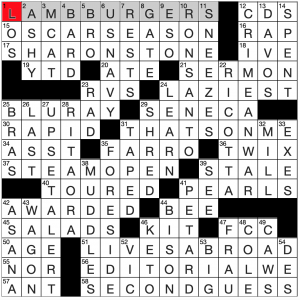 Have I mentioned recently how much I enjoy C.C. Burnikel’s puzzles? It has been a bit since I have done one, so this was a pleasant revelation upon opening this puzzle. A quicker solve for a Saturday LAT puzzle, but I think I have done enough C.C. puzzles by now that I think I get how she constructs puzzles. Her skills seem effortless at this point. Keep ’em coming, C.C.! 4.6 stars today.

Off to, of all places, a pen show today! About to see some fancy, and sometimes expensive, fountain pens! Have a great day! 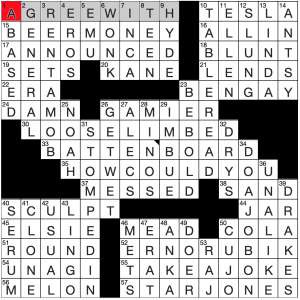 No pseudonym this time! Stan is giving us one of his own creations, and it is a doozy. I did have one slight error smack dab in the center of this one. I can never remember the correct phrasing of 33-Across! (See below). I found the NW and SE corners the easiest, while the 5×5 corners tripped my up much more. I was surprised I only had the one error! Fun puzzle, even though I was quite stumped for a large portion of this solve. 4.7 stars from me! 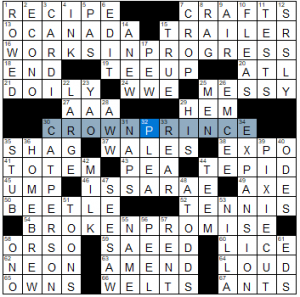 Left-right symmetry in this grid from Matthew today, and there’s reason, or at least a payoff, beyond “it was hard to find themers of the right length.”

Each themer has the letters ‘NPR’ in the middle – the exact middle – of the entry, meshing with the title “Central Air”. NPR certainly works a lot better for this than, say, WKRP! And I *love* that with the left-right symmetry in this grid, it means that the NPRs are not only dead-center in their entries, but also in the grid itself. 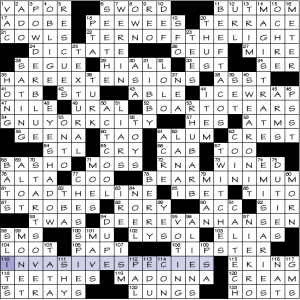 Revealer at 110-across: [Nonnative organisms, as found seven times in this puzzle] INVASIVE SPECIES. My first impression was that this was a poor revealer, as the names of animals are not merely introduced into existing phrases, but homophones replace words in those phrases.

But a slightly deeper analysis is needed. Invasive species—often having no local natural predators, parasites, etc.—tend to outcompete and even supplant native species, wreaking havoc with the ecosystem. And that’s what’s happening here: nonnative animals that are similar to the original inhabitants (read: words) wackify the original phrases.

Maybe a little strange that the clues play it straight?

That’s all I’ve got today. To reiterate, at first I wasn’t thrilled with the theme, but just a little extra thinking changed my mind. Grid’s pretty smooth, but the ballast fill is maybe a bit too sportsy for my liking.

Another debut collaboration! Fantastic! Congratulations to both of you.

THEME: Famous Doctors from movies/television can be found backwards in common phrases. 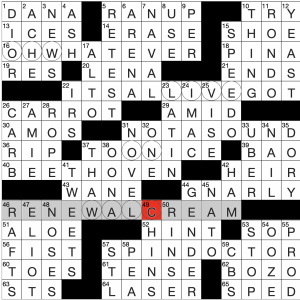 Excellent debut from both of our constructors today. I’ve seen the doctor theme before (with many of these doctors), but I don’t think presented like this. Regardless, it’s a perfect Universal theme except for one thing (which is no fault of the constructors) that I will get to as soon as I give the puzzle its deserved praise.

With five long themers like this, it’s impressively filled with lively stuff. NOT A SOUND! and BEETHOVEN flanking TOO NICE! is excellent. And somehow they don’t try to steal the spotlight and pose as themers (now that I think about it, for solvers who didn’t have circles in their puzzle as the visual aid, they might very well have thought they were themers at first).

Had a tough time parsing RENEWAL CREAM. I thought it was RENEW ALCREAM… some brand I’d never heard of. Duh. But Dr. Claw in there was a nice find. My favorite of all the nemesis doctors, from Inspector Gadget of course.

And the elephant in the room just simply refuses to leave. Or even budge. Or even seem to care that it’s there and not welcome. That elephant is the sorely outdated software that Universal is holding onto which can’t manage to feature circles (amongst many other dated flaws). So instead, solvers are asked to count and mentally circle letters before reading them backwards, both in print and in the webapp. Not good. Not what I’d call a “workaround,” as the publication refers to it. Only solvers (who are likely experienced) who download the puzzle from this site are treated to the way the puzzle was intended to be presented. Newer solvers… sink or swim. The novice solvers I’ve seen have sunk 100% of the time when it comes to interpreting theme clues presented like this:

And, in my experience, novice solvers are not overly excited to try swimming again once they sank.

It’s like going to a great restaurant, and after the waiter puts the meal down in front of you, he simply shrugs and walks away when you request silverware. Sure, you can still eat it. It’s just a lot sloppier and makes for a worse experience when the solution was simply… silverware. Like all the other restaurants have.

Anyway, sorry that the otherwise great debut from these constructors fell prey to that.