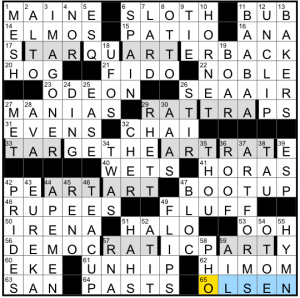 When I first opened this puzzle up in the NYT web app, I wondered if it was going to be a barred crossword where the thick lines represented the starts and and ends of distinct words. Nope! They just delegate where the “art” variations are. I wonder if this implementation was used since some of the “art”s are next to each other, and so simply shading/circles would look like a single group of six letters as opposed to two groups of three. I found it a little off-putting, but I don’t have a better idea of how to graphically represent the theme, so I can’t complain too much.

Five theme answers (three of them grid-spanning) plus a revealer that crosses two theme answers? That’s very hard to construct, and Freddie has done it masterfully here. All of the theme answers here are very solid phrases, none of which feel contrived to get an extra “art” in. I particularly like all three of the 15 letter ones, and am impressed by the find of TARGET HEART RATE. There are six possible orderings of the letters in “art” – ART, ATR, RAT, RTA, TAR, TRA – and Freddie uses four of them in the puzzle. It would have been neat to use all six, but that would probably be impossible while maintaining the same level of theme density and fill cleanliness.

The five black squares reaching out into the puzzle from the sides section off some of the corners a bit, but I think the trade off of keeping the fill clean is worth it. Sure, there are some weird plurals (HORAS, HAHS), and no one loves seeing ODEON or AAAS, but we also get I’M A GONER and HORNET and TEACUP dogs! (Which I didn’t know; I’ve only heard of teacup pigs before). Overall, a very art-fully done Monday puzzle.

Now off to watch the Seahawks play Sunday night football without our STAR QUARTERBACK :( Hope everyone had a great weekend! 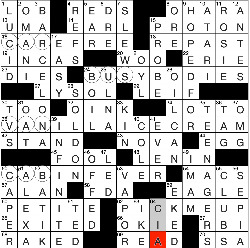 You could say this puzzle gets around. The revealer clue at 62A doesn’t tell you that this is a transportation theme: [Morale booster … or words that might suggest the arrival of one of the circled words] clues PICK-ME-UP, which in its “morale booster” sense could suggest dark chocolate, a back rub, or one of Shostakovich’s happier compositions, at least to me. But go to the circled letters in each theme entry, and you get a mode of transportation that can PICK ME UP in the literal sense:

Lynn Lempel is one of the greats and thus it’s not surprising that this theme is perfectly consistent in its execution: In no case is the circled-letter theme word used as a word, not even a word with a different meaning than its transportation sense. (For example, using VAN MORRISON as a theme entry would’ve been legitimate, but less elegant.) As an added nice touch, in three cases, the theme word is pronounced differently in its theme-phrase context than it is as a standalone word. 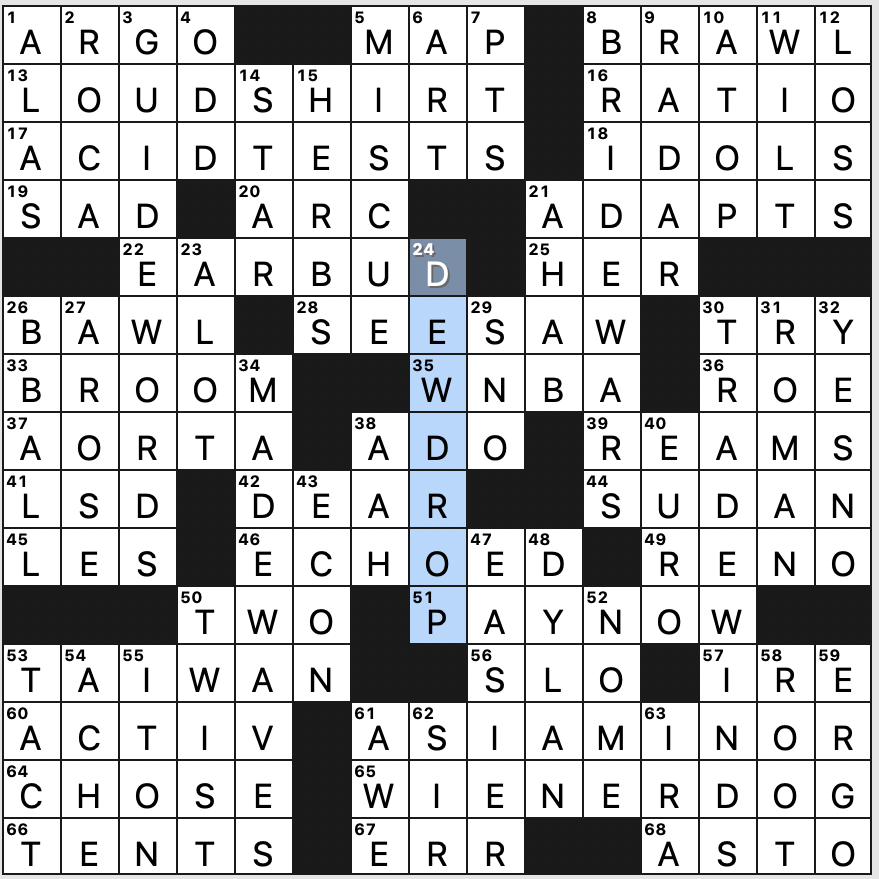 Solid enough, and well aimed at a Monday crowd, but I can’t say the theme did much for me. Hidden words where the word is the same in each entry have become less interesting to me.

WIENER DOG tops the fill along with LOUD SHIRT, ACID TESTS, and ASIA MINOR. I don’t recall seeing EARBUD or B-BALL before, or at least not very often, so I liked those modernish/slangy entries.

Not much else to comment on here. The theme is Monday-solid and the grid is clean. It just doesn’t have that usual Burnikel sparkle. 3.25 stars. 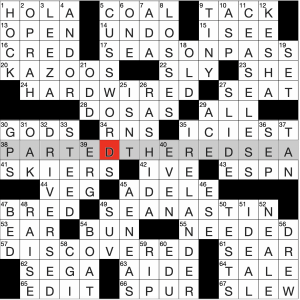 Jeepers, that’s a lot of real estate for theme! It’s essentially five grid spanners if you will, since the black squares play a key role. And very nifty with a solid revealer that I’m glad I found in the middle… this way I had the mystery up top but I was able to plunk in RED SEA at the bottom. Best of both worlds! A couple gimmes and a couple that make you toil a bit.

Took me a while to appreciate the title… Moses “cutting” the SEA with his “staff.” Very nice.

DOSAS was new for me. The anagram nudge was appreciated.

Nothing to0 exciting fill-wise, but nothing terrible either. That’s a lot to ask for with all that theme. Well done! 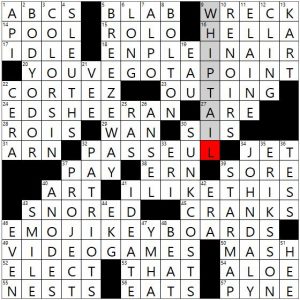 Pretty crunchy grid from BEQ today: two 14s anchor the top and bottom halves and while the corners are decently open, there’s not a ton of connectivity through the middle. I’m usually pretty forgiving of short stuff, but it did pile up for me today.

First, the 14s, which are each very BEQ-y in their own way. YOU’VE GOT A POINT (20A- “Sounds reasonable”) is a solid conversational entry, and “punchable faces” (however uncouth) in the clue for EMOJI KEYBOARDS (46a- They’ve got punchable faces) is part of the internet lexicon that’s right in Brendan’s wheelhouse.

Connecting the halves, PASSEUL (32a- Ballerina’s solo) was a new word for me. Partially due to that -L preventing me from seeing the also-new-to-me WHIPTAIL (9d- Lizard with a jerky gait), I found the east side the more difficult part of the puzzle. It certainly helped in the SE to know some sports with JOHN DALY (34d- 1991 PGA Championship winner) and Loui ERIKSSON (35d- Arizona Coyotes forward Loui ___) right next to each other. And I still needed the remainin crossings to get (57a. Christie detective PARKER ___) PYNE. Julia Roberts’ character TESS Ocean is also in that corner. 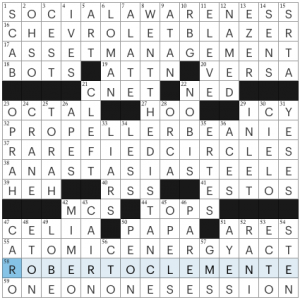 It’s been a few years since triple-stacks of 15s were seen in a bunch of NYT themeless crosswords. They’re hard to pull off without a lot of gluey crossings, especially when there are three triple-stacks rather than just two. Here, the 15s are great—SOCIAL AWARENESS, CHEVROLET BLAZER, ASSET MANAGEMENT, fun PROPELLER BEANIE, RAREFIED CIRCLES, ANASTASIA STEELE, ATOMIC ENERGY ACT, the great ROBERTO CLEMENTE, and a ONE-ON-ONE SESSION. They’re all crossed by another 15, WENT THE DISTANCE. But the shorter Downs that facilitate the stacks leave a bit to be desired: foreign C’EST, ELEVE (which is also old crosswordese), NOBIS, ESTOS, CIELO; crosswordese ALATE, STEN, ECTO, plural ERTES; abbrevs SRTA ATTN RSS MCS CTO GMS; [French cathedral town] SENS (?!).

2.75 stars from me. I’m okay with seeing triple-stacks (especially trios of them) fade from the vogue.

Theme: The “top” word of each theme answer (the first word, but they’re going vertically) can be followed by the word “cake” 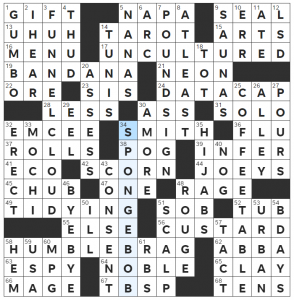 I believe this is Rose’s debut! Congrats! Since the USA Today themes only involve one of a few set mechanisms, I think they work best with an apt title and vibrant theme answers. This title is perfect, I love how it works with the vertical answers, and SPONGEBOB is awesome as a theme answer.